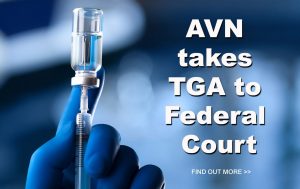 On tonight’s podcast show i am joined by former AVN president, Meryl Dorey to discuss our current situation here in OZ and the legal case about to take place against the TGA.

Australia is in a tailspin – descending almost inexorably into tyranny.

We are not able to travel from State to State or overseas, work in our normal jobs – even when those jobs are part of our own business, go out to eat, drink, to the cinema, dance, sing, or do just about anything else without agreeing to take an experimental jab that has already killed hundreds of our countrymen and women and injured nearly 80,000.

It is obvious to anyone who has observed what’s been happening over the last 22 months that our governments – State and Federal – are determined to remove every right our parents and grandparents fought for in many wars over the last 100 years or so.

We at the Australian Vaccination-risks Network (AVN) have watched this with great dismay, as we know many of you have done as well. We have participated in protests, made submissions, written letters and for the most part, though these actions have put the government and their bureaucracy on notice, their course seems to have been set and unchanged through it all.

Court cases have arisen and been lost – and others are ongoing – we wish them all well. Though we have informed people of these cases and done everything we can to offer whatever assistance we can to the organisers, the AVN has not personall

We recently received a legal advice prepared by a retired barrister, that was informally reviewed by two eminent legal minds (a former Justice and current QC), where they were of the view the case should run. This has seen the AVN engage instructing solicitors for formally engaging a QC or SC to settle a final opinion based upon a complete brief. Assuming AVN is informed the case has merit, and the proposed Application is filed and heard, then if it wins (there is never a guarantee) .. there is every possibility of turning the current situation on its head!

The AVN feels so strongly about this case, we decided to start the fund-raising going by donating $20,000 already and directly into the AVN Judicial Review Fund of our instructing solicitors, Irish Bentley. We hope that will convince all of you reading this to also chip in. Whatever you can give – and we know that times are especially hard right now – would be very much appreciated.

We have set up an account at the Christian fundraising site, givesendgo.com and all funds donated will be transferred to the trust account of the Instructing Solicitor in this case.

Whether you are able to donate $5 or $5,000, we need you now! And if you have no money to give to this cause, we need you to share this with everyone you possibly can – both here in Australia and overseas.

What we do here and now can have wide-ranging and positive influences on the entire world. There are more of us who believe in freedom than there are those who want to enslave us.

The AVN has fought for you and your family for nearly 28 years. Now, we are asking you to join in the battle for your family and community!

Please click this link to read more about why this case needs to go ahead. Our terms and conditions can be found at this link.

For our children; for our parents; for our community; for our very souls – we will fight to win and never stop until we are ALL free to live, to breathe and to be healthy on our own terms.

IMPORTANT – YOUR CHOOSING TO DONATE TO THIS APPEAL IS ON THE BASIS THAT YOU HAVE READ AND AGREED TO. THE FOLLOWING TERMS AND CONDITIONS:

1. Australian Vaccination-risks Network, Inc. (AVN) is seeking donations (AVN is not a charity) to meet the legal and related costs of proceedings to be issued in the Federal Court of Australia. A legal Opinion has already been obtained from a retired barrister, which has been reviewed by a former Justice of the Federal Court of Australia, and a world-famous Queen’s Counsel (QC), where both have deemed the legal grounds for Judicial Review solid, with one remarking the Opinion “well argued”. Nonetheless, for the purpose of getting ready to initiate legal proceedings, AVN will formally engage one or more barristers to act, which senior barrister(s) or QC will be requested to review one final time the Opinion and return their written views on the Opinion, whether they agree or disagree, together with their final Opinion with respect to prospects of success, and the manner of how the proposed Application should proceed.

2. The only option is recourse to the law, hence legal proceedings in the Federal Court. There is no guarantee of success, but people who are fighting, care, and where the law and evidence reviewed to date, indicate a real possibility of success.

3. The government has a lot more public money than AVN. We are the “David”, they are the “Goliath”.

4. Please note that your contribution will be a donation to the AVN Judicial Review Fund. Other than for AVN’s internal administration purposes, the name of a donor will not be made known or publicly released unless otherwise advised by the donor.

5. Your donation will be placed with all other donations in the trust account of Irish Bentley Lawyers

6. Any donations made via the Give Send Go platform will incur a 2.9% service fee plus 30 cents US per transaction that will be deducted from your donation. The balance after this deduction will be the amount received in the trust account, and is what your receipt will reflect.

7. The conduct of the Judicial Review Application has two separate phases:

First phase: a QC or senior barrister will provide an Opinion, first with respect to the legal opinion already rendered, then generally as to the merits of a challenge to the failures by the Australian Government in not having already cancelled or suspended the vaccines. He will also be asked to provide Advice on Evidence.

Second phase: once it is resolved that the proposed Application has merit, the Judicial Review will be prepared, filed, and served upon the appropriate parties within the Australian Government.

8. The AVN has already engaged Irish Bentley Lawyers, and is the Client instructing Irish Bentley Lawyers for the purposes of the First Phase, and hopefully the Second Phase described in 7 above. The AVN currently envisages (subject to any further legal advices it may receive), that only AVN will be the Applicant/party for the purposes of the  proposed Application described in 7 above, where the AVN hopes to have sufficient Standing before the Court representative of members aggrieved by the failures of the Australian Government in not having already cancelled or suspended the vaccines. The total amount of money that is estimated to be necessary for both phases is $300,000. AVN has already seeded this Fund Raising Campaign with AU$20,000.

9. Irish Bentley Lawyers will only pay over, transfer or disburse monies from that AVN Judicial Review Fund for invoiced legal (and related) costs, expert fees, and related expenses or disbursements that have been reasonably and properly incurred. In addition, minor amounts related to the costs of fundraising and related public and community meetings organised by AVN may be met, where such activities expressly concern the Application for Judicial Review.

10. If at the completion or cessation (for whatever reason) of the proceedings (which may include appellate proceedings) there are monies exceeding AU$5,000 remaining in the AVN Judicial Review Fund (i.e. surplus funds), donors who have contributed an amount greater than $500 may elect to receive a pro rata return from the surplus funds (i.e. their total donation as a proportion of the total funds raised). Any funds remaining after such pro rata return will be paid to AVN.

11. AVN is first and foremost a volunteer-run community group seeking to act with individuals and other community groups in the defence of our health, especially at this critical time where People across Australia and the Globe, are being coerced by government mandates and restrictions upon freedoms to get vaccinated.

The original text of this page has been edited in order to:

a) Further clarify the legal steps and advices received leading up to the engagement of instructing solicitors; and

b) In light of the present likelihood of the AVN to be the sole Client required for providing instructions for this matter, and the present perception that the AVN is a sufficiently representative body with respect to the issues anticipated to be the subject of judicial consideration, should the Application proceed, then only the AVN will need to be the Applicant for bringing the proposed Application (subject to any further legal advices). In this respect it was deemed necessary to reflect the developing circumstances and advices received to date, by modifying appropriately Condition 8, and deleting Condition 9.

https://crazzfiles.com/wp-content/uploads/2022/01/meryl-dorey-CUT.mp3Podcast: Play in new window | DownloadSubscribe: Apple Podcasts | Android | Email | RSS Researcher and author Sharon Daphna jumps back onto the podcast with me today 28/09/22 to discuss her latest gifting work in the US and to cover the latest worldwide weather events. On today’s podcast show, we continue to break down[…]