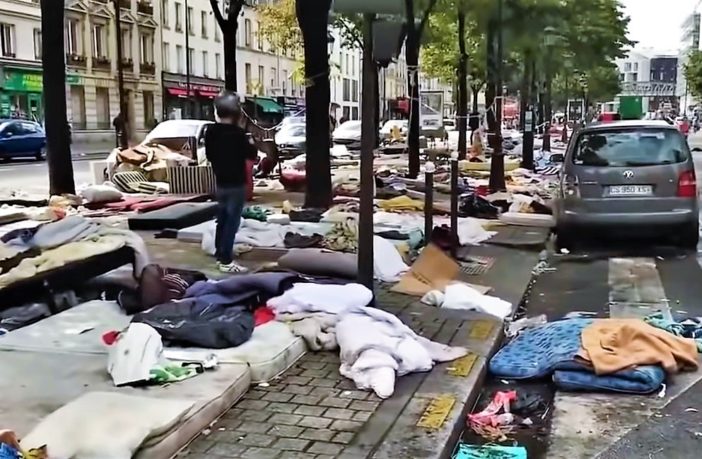 Last year more than 100,000 migrants requested asylum in France, an increase of 17 per cent compared with 2016 and the highest ever recorded

France is a large country and its ability to temporarily house migrants shouldn’t be a big problem, in theory. In practice, however, migrants don’t migrate once in France, ironically, but concentrate; the best example being the infamous Calais camp or “Jungle”, from where they seek a way of entering the United Kingdom.

Besides that, a lot of migrants are also concentrated in France’s larger cities such as Bordeaux, Paris and Lille. These cities already had large migrant populations, a large underclass and probably more than a few no-go zones as well.

After the Calais jungle camp was demolished, things became worse. Mayors of seven major French cities rang the alarm because they could not help and accommodate the endless stream of migrants.

In addition, thousands of migrants went to Paris. Soon, Paris became the new Calais camp replete with tents, mattresses and mountains of garbage on the streets. Their mere presence changed large swathes of the French capital from a city that was once Europe’s cultural centre, a beacon of civilisation, into an almost literal Third World migrant jungle.

Several ghetto camps formed throughout the city, it was as if the banlieues (suburbs) where rioting and car burnings occur with little pretext had moved themselves into the centre of the city; entire neighbourhoods were transformed into garbage dumps. Near canals, metro tracks, train stations, parks and even near a road in the 19th arrondissement of Paris vast mountains of rubbish accumulated.

French police forcefully removed these camps more than 10 times but they reappear within days, likely aided and abetted by so-called NGOs that facilitate a lot of Europe’s colonisation by third world migrants. A police staff member who wanted to remain anonymous told the Local:

“The problem is already here. The refugees have always moved between Calais and Paris, often depending on what action police take down here.”

There will be no short term solution for Paris, as president Macron’s plans for stricter immigration laws face strong opposition. The citizens of Paris and the millions of tourists who visit her every year are forced to accept that the city of lights has been extinguished, civilisation has ceased and it has become a garrison of garbage.

One thought on “The destruction of Paris: How the city of light became the city of garbage”