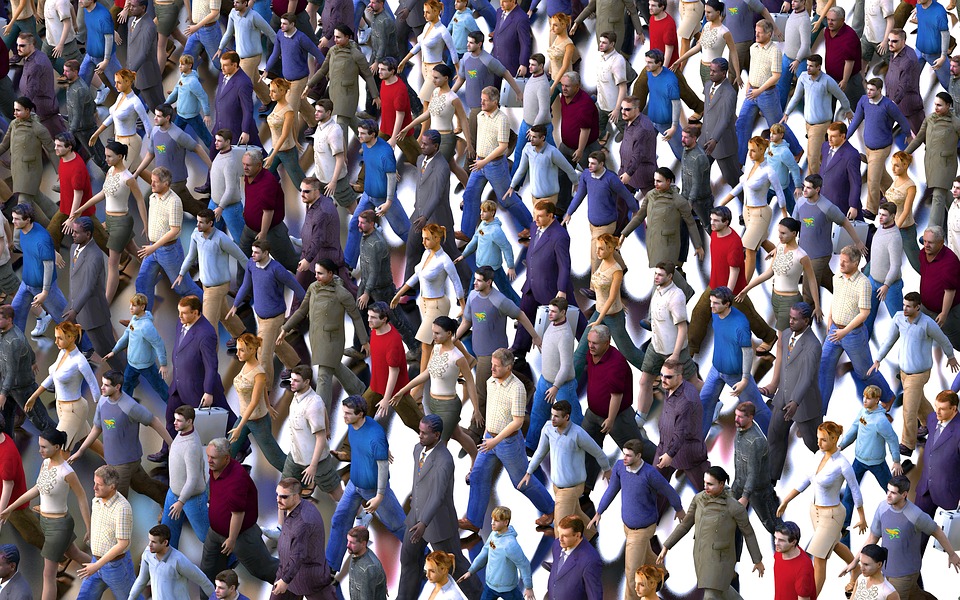 I have received several emails telling me I’m to hard on the masses.  Am I?  If I am too hard the masses it is because conformity deadens the human spirit.  Conformity is the imitation of behaviours  beliefs and values that are considered socially acceptable.  The trap that most fall into is they reject things out of the desire to just be ‘different’.  So they accept something from yet another external source to be part of a different group.  The leaders of this world have successfully put people into to groups where they think they are alike.  The human race has become different groups of domesticated mammals.  That is the definition of a Herd.

I realize for most it is not their fault.  An animal born into captivity does not know what freedom really is.   We are indoctrinated from a very young age that what makes us an individual should not be cultivated but shunned.  Very few people will view themselves as being capable of changing the world or bringing something special into the world.   They are incapable of engaging in personal heroism. My question to you is, “If not you, than who?” Religion and society give people something to lose themselves in.  They look to others  to determine what they should think or how they should behave.  They live their life for others.  They are all outer show and are empty on the inside.  Governments have figured out that force is not very productive for controlling huge populations.  What is very effective is mind manipulation.  I’m about to show you how this sorcery works.

The reason why we like to group up is because it is in our DNA.  If you have read my Lemurian Magic post, you know we all have Hominid and Alien DNA.  Hominids used to travel in groups.  It offered protection against wild animals and helped with finding food. It was done for survival.  Being part of a group is a left over and dormant part of all of us we inherited from the hominid.  We no longer need to stick together for safety and food, but the leaders of this world like to use the psychology of groups to control us.  By dividing a population into polarizing groups such race, class, religion, gender or politics they succeed in divide and conquer.  The effects of group psychology make rational discourse and debate between individuals  of these groups almost impossible.  When group belief structures clash they tend to revert to destructive means to defeat others who don’t think the same.  A society dominated by these polarized groups has hostile conflicts quite often.  I know I’m right on this because this world in one conflict after another.

“The systematic study of mass psychology revealed…the potentialities of invisible government of society by manipulation of the motives which actuate man in the group…(these studies) establish that the group has mental characteristics distinct from those of the individual, and is motivated by the impulses and emotions which cannot be explained on the basis of what we know of individual psychology.  So the question naturally arose:  If we understand the mechanism and motives of the group mind, is it not possible to control and regiment the masses according to our will without their knowing it?”

“The conscious and intelligent manipulation of the organized habits and opinions of the masses is an important element in democratic society.  Those who manipulate this unseen mechanism of society constitute an invisible government, this is the true ruling power of our country.  We are governed, our minds our molded, our tastes formed, our ideas suggested, largely by men we have never heard of…in almost every act of our daily lives, whether in sphere of politics or business, in our social conduct or our ethical thinking, we are dominated by a relatively small number of persons…who understand the mental process and social patterns of the masses.  It is they who pull the wires which control the public mind, who harness old social forces and contrive new ways to bind and guide the world.”

Bernays is the person who came up with modern advertising, but he was also used by governments to give ideas on controlling the masses.  A group or crowd is a state of mind!

So long as one identifies with a group, their mind and behavior will be controlled by that group.

The Herd groups are united by a common idea, belief or ideology. They have complete submission and are fanatical to a person, idea, or belief.  There is no clear reasoning in the Herd.  They accept ideas superficially  and utilize them for fuel to back their opinions and beliefs.  There is no individual in the Herd, only pawns.  The ideas of these groups never come from within the group. It is always an outside force pushing and pulling them to do a bidding.  All that needs to be said is that they are doing it for god, freedom, prosperity, or peace.  Once this is pointed out, the Herd follows blindly no matter how corrupt the idea or belief.  The outside source tells the group it is the absolute truth and does not waver from it.  It plays on the emotions and biases of the group to convince them their attitude or choice is their own.  What most don’t realize is the leaders of this world have already decided to do what they are going to do.  Politicians are just there to give you the illusion that you have a choice.   On any political or relgious belief you hold, ask yourself if you came up with that belief or was it given to you from someone else?

“The point is to make the masses demand of the government what the government has already decided to do.  If it follows this procedure, the government can no longer be called an authoritarian,  because the will of the people demands what is being done.”

Now that some of the world is waking up to the fairy tale of a god who sees everything that everyone does, governments are putting cameras up everywhere.  They tell us that our fellow humans are nothing but thieves, criminals and sinful people who are going to hell.  They need to put the cameras up to help protect us.  The Herd cries out, “Yes, protect us!  Rescue us from ourselves”.  I for one believe that the majority of humans are good.  It is a minority that act bad, but most who act that way are manipulated into doing it.  In reality these cameras are put up not only to watch you, but they know humans act differently when they think they are being watched.  We all do things when we are by ourselves that we wouldn’t do in front of other people.  We sing, we dance, we make love, we talk to ourselves, we pretend, we are creative, etc.  We become our true selves when no one is watching.   With cameras everywhere and the media having us believe that our phones, computers, televisions and appliances are watching everything we do, we never let our true selves out.  We push that part of ourselves to the shadows and become automated robots.  Constant monitoring creates a prison in the mind.  And to make it perfectly normal, Mark Zuckerberg gets on television and tells us “Privacy is no longer a social norm”.  We need a place to think freely and be ourselves.  Rosa Luxemburg stated “Those who do not move, do not notice their chains”.

If I am tough on the masses, it is not because I like to belittle them.  It is because I want those who can see whats going on to know they don’t have to stay in the Herd.  I do it for the sake of waking others to the deceptive nature of political rule.   If you are growing tired of the game of social norm and it is troubling you and giving you ulcers, you are probably searching.  It is a symptom of you growing.  You can not just start thinking positively about everything and make these feelings go away.  Your life path must change.  You must escape the Herd.  Your life path must become authentic. That is your life path is shaped by behaviors, knowledge and values which are chosen for authentic reasons.  Some of this will entail adopting things from the Herd that are considered socially acceptable, but you will accept them because you understand their utility.  The Herd adopts them because they want to fit in or be accepted.  Not only does the Herd accept their oppressors, they adore them.

My work is for the individual who is tortured by the chains that the Herd does not notice.  Educate yourself and develop your critical capacity to unlock those chains.  Quitting the Herd is quitting the game of servitude.  If enough people ‘wake up’, voluntary servitude will end quite abruptly.  While I don’t think that will happen in my lifetime, at least I can help plant the seed for a better tomorrow.

“Each individual has a share in numerous group minds- those of his race, of his class, of his creed, of his nationality, etc. – and he can also raise himself above them to the extent of having a scrap of independence and originality.” – Sigmund Freud

2 thoughts on “The Herd”