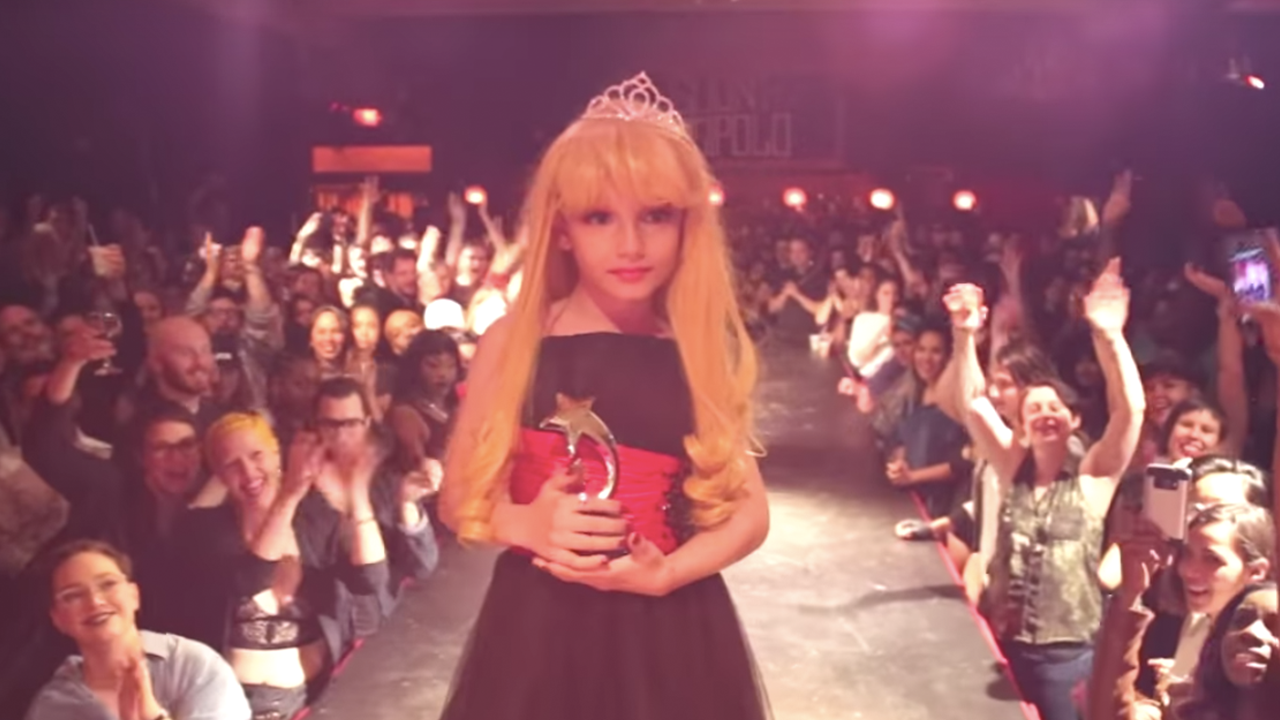 Every time I think perhaps I’m being too hard on our culture, that things can’t be as bad as I make them out to be, I stumble across a story like this and realize, if anything, I’m far too optimistic.

You may not want to click the link and be subjected to all of the requisite images and details, so I’ll just summarize: The LGBT community has been celebrating an 8-year-old drag queen who goes by the name “Lactatia.” The child has been “performing” in sexually charged drag shows in Montreal since he was 7. His “supportive” (read: abusive, insane, barbaric, Satanic) parents have encouraged his continued sexual exploitation. His mom even does his makeup for him.

The gay media and the gay community in Canada can’t get enough of the cross dressing prepubescent child. If you were to click the link (which I don’t recommend), you would see screen shots of the child writhing about on the ground in women’s clothes while a crowd of perverts look on and cheer. And that’s what makes this whole thing all the more disturbing. It’s not just that a child is being sexually abused, but that he’s being sexually abused to the sound of uproarious applause. And even those who are not applauding still have chosen not to protest. We are all just sitting by and offering our tacit or explicit approval as a child is turned into a circus act for homosexuals.

Now, let’s adjust a few of the details and imagine how the reaction may differ. Let’s consider how people would respond if it were an 8-year-old girl being dressed up in make up and lingerie and paraded in front of a crowd of hooting and hollering heterosexual men. Now imagine that some mainstream publication for straight men did a glowing profile of the girl and her parents, declaring her “the next superstar” on the child sexual exploitation circuit. That’s exactly what the gay news site The Advocatedid for this young boy, ecstatically proclaiming that the boy “looked like a living porcelain doll” when he danced on stage for the sexual gratification of a bunch of grown men. What if Maxim described a sexually abused girl in the same way? Well, maybe we’ll get to that point soon enough, and I’m sure most of us will remain as obediently silent in that case as we are now.

It should go without saying that this boy’s parents ought to be thrown in prison as sexual abusers. I can think of harsher punishments for them, but I’m a Christian and so I must leave that to God. And if we lived in a just and sane society, the police would roll up in vans and conduct mass arrests of all those who organize or attend a drag show featuring an 8-year-old boy. They should all be in jail, or at least on a registry so we know to keep our children far away from them. The fact that I must even say any of this — and that many people who read it will actually disagree — tells you what you need to know about our wicked, rotten, disgusting, predatory culture.

There is one other thing that should go without saying, and it does, because nobody will: the LGBT agenda is an active threat to children. This story is not an aberration. It may be more extreme than what we’ve seen elsewhere, but it’s all in the same vein. Montreal may be a few cars ahead of us on the train to Hell, but that won’t make much difference in the end. The movement to indoctrinate our children into this kind of debauchery and insanity is widespread. Across western civilization, children are being abused and exploited in the name of sexual enlightenment. The militants in the LGBT camp are not satisfied to let kids be kids and make their own choices when they become adults. They want to get into their heads now and turn them into disciples — or worse.

And, as we’ve seen, all too often a child’s own parents are more than happy to cooperate with, or even facilitate, this process. What chance does a child really have if his own parents have decided to pimp him out to the local gay club? The poor boy has nowhere to turn. It’s an outrage. A real outrage. Not the popular, fabricated kind of outrage. His innocence has been defiled, his childhood stolen, and he has been convinced that his role in the world is to be a spectacle for the amusement of corrupt, despicable adults. A “doll,” as the gay media has described him. A plaything for degenerates. An object for their pleasure.

I suppose I have nothing more to add here. What else can be said? How can I explain why this is terrible and evil? If you are such a moral monstrosity that you can’t see any problem with an 8-year-old boy in fishnet stockings gyrating on stage in front of a crowd of drunken pedophiles, what can I say to change your mind? All I can do is rage against the dying of the light, and pray for your soul, and more importantly for this boy and all the other children who’ve fallen victim to LGBT indoctrination.

To see more from Matt Walsh, visit his channel on TheBlaze.