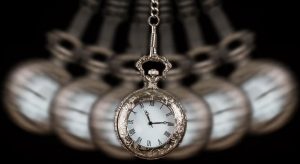 Time is the greatest of all matrix-based constructs to graduate through, for once you exit the time-track, consisting of past/present/future, you enter the absolute state called the now, free from any embedded program functioning within the time-track. The only way you can be controlled within time is if you are still playing a part within present time. Anything greater than yourself with power over you means that you are inside of time, and the program causing relativity would be running from the now.

The now is the source of everything in the universe. If there ever was such a thing as god, then god would sit in the now, with absolute power, because the now is outside of time which would also be a fully conscious state!

Whatever is outside of time determines what happens inside of time. Unconsciousness in the now determines what is happening within the construct of time, and actually creates the illusion of a time-track! In order to build what is called a life you can only do so with the help of a time-track that consists of past/present and future. The fundamental axiom of life is built on time, and so is death.

For time to play a role, you need to embrace the present time, fit into it, maybe get a partner who is fitting into the same game, (a part-ner also playing a part, part of the illusion) share the experience, intertwine with the architects creation, create memories; a past from the restricted present construct, and believe in an imaginary future. This is how consciousness materializes what we call time and life built out of it.

It is the operation of yourself in a time-track that keeps re-incarnation operational through your soul, because time loops in on itself, it repeats, much the same as a clock. You cannot escape the hold of time once you are under its spell, which would be all the programs housed inside the time-track, sourced from the future which is in the now.

In time there is actually no going forward and no progress because time is merely an observer-dependent phenomena and the observer would of course be us, the consciousness, which is guided like sheep by the lightshow of the light-bearer.

All future is in the now, there is only an unpredictable future because you are not in the now and there are still programs running from this space, affecting your beingness, you may call this space the machine world if you like.

All the programs in the matrix can only touch a soul inside of time but once the soul enters completely into the now where all of it was running from, by an ascension of consciousness, then the programs cannot work anymore because they only function through you in accordance to your own unconsciousness.

By becoming more conscious in the hologram and by finding  the reasons and mechanisms behind all the phenomena in the illusion, how the mechanisms functions in duality, you start shattering all the veils put before you, which would be the same as operational programs. You have to learn how the digital hologram of the mind conspires in order to render it obsolete! This is the only way to escape time, is to raise consciousness.

The architect was sourced in the future. He is the only time-traveller, because all his programs affect the whole construct throughout time. We started from the beginning of time, graduating slowly but surely through it, taking billions of years!

So he would have the whole script in his hands, and made sure through minions and puppets, who sold their souls, that the script would be realized, as far as he could push it!

This means that the architect obviously had an advantage from the start, always one step ahead, “the adjustment bureau” foreseeing and overseeing the progress of the matrix 24/7. It is said that he himself has come and gone in many forms through many different influential people so to lead mankind further astray.

It is in the unattainable future where the illusion of the present and the past actually sit, from your perspective. Remember, you are only in time because you are unable to see your unconscious agreements that keep the veils/programs operational that run from the now, which keeps you out of any likely future!

Breaking the Axiom of Time

“Once a soul understands this spell he reclaims the Now; which holds the past present & future and this alchemises the spell back into the 5 elements.” – Diclem, Metaphysical Alchemists

Origin of yourself in the Matrix

To make this simpler to understand, imagine that before the beginning of time (before time existed), in the now, the creator programmed a computer game called the matrix, and initiated the birth of artificial intelligence which broke the ether (the bond that makes everything one) and so everything inside of the whole had to acclimatize accordingly to the computer generated holographic program, in order to keep the whole in-tact!

There was a choice, the soul had to adapt to the birth of this computer generated hologram and within it there is the creation of everything that is as we know it, matter, time, energy and space. Due to the creator breaking the ether, you had to therefor give up some of your elements (not all) in order to be in the matrix, you had to divide yourself inside the hologram according to the code, you had to follow the rules! Nevertheless this had to be done in order to not break the unwritten soul contract, that of immortality. You had to remain one with it to not break your own ether! Your own connection to the whole.

“Before you enter the matrix you are a soul. All 5 elements are intact! Entering the Matrix you change from “I the soul”(creator) to a “Me”(destroyer). This is initiated by the 10 insights, 10 doorways, 10 dynamics & 10 Gates – The 10 major energies of the matrix that forms the arsenal of the illusion. (The artificial divisions of this reality!)

“You go from I the Soul to a me by accepting Metaphysics(Science/Mathematics Religion etc, etc) You turn your Breath; Oxygen element into the above knowledge and 97 and a half % of your 0xygen has turned into knowledge(Metaphysics). This causes you to lose the fire element (fire needs 0xygen).”

“The reason we chose all those elements is because the creator broke his Ether to make the illusion of Metaphysics; therefore you had no option but to accept it through the oxygen and fire element!  In order to come into the matrix, you have to give up some of your elements, because you were complete prior to the matrix! That is how you lost part (97 and a half%) of your fire element!” – Diclem, Metaphysical Alchemists.

This is how I the soul lost Its absolute potency. The 5 elements had been split and separated, which makes up the soul.

There are those that never accepted, never sold  their souls to the architect and his creation, they  remained soul-centered, and have retained the potential to over-write all the programs via alchemize! It is said in the bible that many are called and few are chosen. This actually means that many are called to join the matrix but very few are the chosen ones that do not fall for the illusion in any way.

Light-beings work on sound(consciousness) and not intelligence, the last of those that have retained soul-center, are alchemizing all the programs back to the 5 elements which will bring us all back to cosmic laws, and the end of what had a beginning out of the word. The end of the illusion is upon us.

It does not matter what you do to the soul, the absolute fact remains that it is eternal, and does not have an end, nor beginning.  What is crucial to know is that the matrix had a beginning and therefor it simply must have an end. An absolute will always triumph over an obsolete.