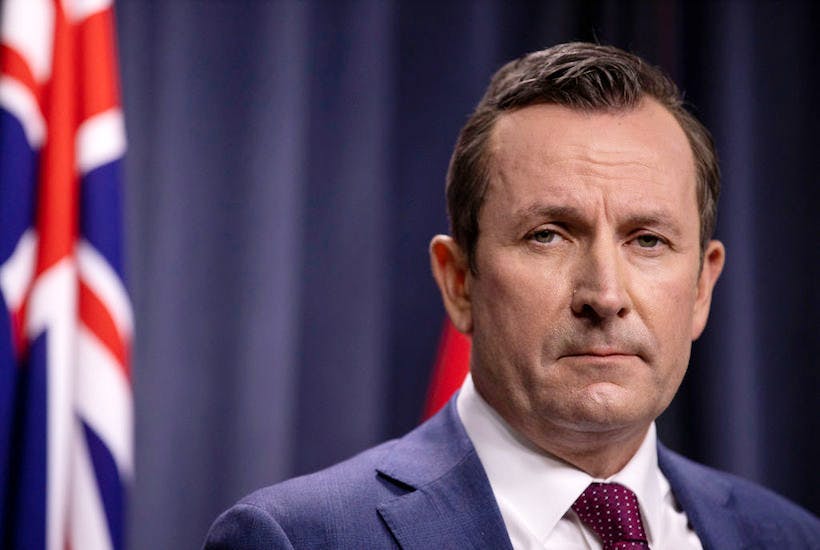 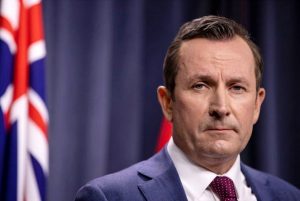 As the saying goes, all power corrupts, and absolute power corrupts absolutely and — after his astounding eruption Friday afternoon — the nation is now fully aware that the hubris of Western Australian strongman (sorry, Premier and self-appointed Treasurer) Mark McGowan knows no bounds after conquering all before him in the March state election.

Since he is all-knowing, he regularly dispenses advice to everyone in National Cabinet. Last week he took aim, as he often does, at New South Wales Premier Gladys Berejiklian.

On Friday Marshall Mark know-all set out how he would “crush and kill” Sydney’s outbreak if he were NSW premier – by mandating masks outdoors, calling in the army, putting up roadblocks and having the same harsh restrictions for everyone.

He labelled some of the measures being applied by the NSW Government as “half baked” four weeks into lockdown, adding it was “inexplicable” Sydneysiders were mixing mask-less outdoors and urged his counterpart to leave “no stone unturned” in the battle to contain the virus.

The day before he lectured that the NSW government had clearly made mistakes and needed to ignore the “shock jocks”.

“They’ve got to ignore some of the shock jocks in NSW, some of the right-wing nut jobs who are saying let it rip,” Marshall Mark said.

“They’ve got to actually hold the course… lockdown until they crush and kill it… for all our sakes.”

By “right-wing nut jobs”, Marshall Mark presumably means anyone who disagrees with him.

Let me state clearly. I’m no fan of Berejiklian. However, as Spectator Australia readers, a discerning bunch, would know, Marshall Mark despises these ‘nut jobs’ because they present a view that does not accord with his. In doing so, they have been referring to proper evidence-based research which states, among other things, that the costs of lockdowns outweigh the benefits, at many levels. So those infectious diseases experts at Stanford University, who wrote in January in the European Journal of Clinical Investigation that the costs of lockdowns (both health and economic) vastly outweigh any potential benefits, are ‘right-wing nut jobs’?

What about Professor Gigi Foster of the University of New South Wales, who referred recently to a report from the National Bureau of Economic Research in the US? The report’s authors examined data from 43 countries and all US states, looking for a positive link between shelter-in-place orders (i.e., lockdowns) and excess deaths. They observed either no visual change in excess deaths or increases in excess deaths resulting from lockdowns. They must be nut jobs, too.

As for Marshall Mark’s insistence that people wear masks outdoors, those who conducted the Danmask study must also be loopy. This was the most comprehensive study on the subject, conducted according to properly rigorous scientific research we can rely on. The evidence showed that wearing masks in the community does not significantly reduce the rates of infection. The study concluded that it seems any effect masks have on preventing the spread of the disease in the community is small.

Then there is this craziness of ‘crushing the virus’. Marshall Mark now has omnipotent powers to eliminate diseases. Epidemiologist after epidemiologist around the globe has declared coronavirus will be with us for some time yet and that it cannot be eradicated. They must be nut jobs, as well. Which virus will you try to crush next, Your Magnificence? The ‘flu? The common cold? Gastroenteritis?

Let’s not forget in 2019, according to the Australian Bureau of Statistics, the ‘flu killed more than 4100 people, 37 on one day alone in Adelaide. Road accidents account for over 1000 deaths over the last 12 months. But we didn’t crush businesses and livelihoods for those things. The total deaths from or with Wuhan flu this year amount to a grand total of six.

Maybe Marshall Mark is upset that he is being exposed for his failures and backflips, thus using the old gutter tactics of diversion and mud-slinging. Of course, the classic left-wing strategy when you can’t win an argument with logic is to resort to insults and vitriol.

Before the state election, the Marshall promised WA’s electoral laws would not be reviewed, only for it to be one of the first announcements made following the swearing-in of his government. The aim of this review would be to reduce the amount of rural representation in the WA parliament, effectively disenfranchising these voters.

Two weeks ago, while he was on leave, he had to reverse his policy of banning organisations (in this case the Australian Christian Lobby) that ‘do not agree with the views of the WA Government’ from hiring theatres operated by the Perth Theatre Trust. It later emerged that Uyghur organisations had also been prevented from hosting events at Perth Theatres pursuant to the same policy. The Nine Newspapers and their local website, WA Today, in particular, have focussed on the apparent closeness between the McGowan Government and the Chinese Communist Party.

Last month the WA Salaries and Allowances Tribunal awarded politicians a pay rise while, wearing his Treasurer’s hat, Marshall Mark increased household charges in the last state budget. Power and water bills will rise by 1.75 per cent. The emergency services levy will go up by more than 4 per cent and motor vehicle costs will go up by 3 per cent. Surely this was not necessary with a budget surplus of $2 billion?

With a surplus like that, he could doubtlessly afford more than the measly $3000 offered to small businesses who were forced to close during the lockdown early this month. Of course, as anyone who has run a small business knows – it goes without saying that Marshall Mark never has – $3000 doesn’t get you very far at all. What is more, this grant is very restricted, so tourism-reliant industries such as wineries, breweries, museums, wildlife parks, coach services and vehicle hire operators were excluded. Other small businesses to miss out were specialty retail stores, physiotherapy and allied health professionals.

Then we have a crisis in our hospitals. Last week the emergency departments at Sir Charles Gairdner Hospital and Fiona Stanley Hospital, Perth’s two largest hospitals – not for the first time – were forced into a code yellow, which meant they could not admit non-urgent patients. This comes on top of 20 new nursing recruits being denied entry into the state after WA Police refused their G2G applications. Add to these record ambulance ramping levels, and the tragic death of seven year old girl at the Perth Children’s Hospital. Immediately following, Health Minister Roger Cook promised to introduce a system to give worried parents more chance to be heard in the children’s hospital system. Yet, when a tragic death in similar circumstances happened in 2016, Mr Cook, as then-Opposition Health Spokesman, promised exactly the same thing, only to forget about it when the ALP won government in March 2017.

My dear readers, the real nut job here is Mark McGowan and, as is usually the case with people who think they know everything, when he screws up it’s never his fault.

One thought on “The People’s Republic of Westralia: where nut jobs rule”