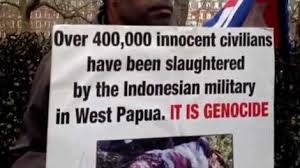 West Papua is the western half of the island of New Guinea, bordering the independent nation of Papua New Guinea. It lies just 200km north of Australia. The land comprises a large mountainous interior, forest lowlands, large areas of coastal mangrove swamps and is surrounded by numerous small islands and coral reefs.

Indonesia officially acquired West Papua in 1969, after a sham ballot on independence in which only a handful of the local population were allowed to vote. When the ballot was held in 1969, it was far from free and fair: the Indonesian military handpicked 1,026 leaders to vote on behalf of the entire population, and threatened to kill them and their families if they voted ‘the wrong way’.

In this environment, the outcome of the so-called ‘Act of Free Choice’ was unanimous – and Indonesia’s takeover of West Papua was rubber-stamped by the UN. The ‘Act of Free Choice’, in 1969, was obviously a sham referendum headed by the US Government and United Nations with support from the Australian Government. The UN has failed to acknowledge, and rectify this, showing its lack of commitment to human rights, international law, and UN Resolution 1514.

Consequently, the UN and a number of countries are complicit to genocide.

Indonesia has been criticised for many human rights abuses in the past which includes the mass slaughter of communists in 1965 in Indonesia itself, the invasion of East Timor in 1975, and now its illegal occupation of West Papua.

The Genocide Australia Does Not Want You to Know About

Since the first days of Indonesian occupation, the people and land of West Papua have been under relentless attack. In an attempt to control the Papuans, and to claim the land to make way for resource extraction, the Indonesian army has systematically murdered, raped and tortured people in numbers that would constitute a genocide.

Indonesia has also carried out a social engineering project on a massive scale in West Papua by relocating hundreds of thousands of people from across Indonesia to live in camps cut into the forests of West Papua. This program of transmigration has long been heavily criticised and has brought problems for both the indigenous population and trans-migrants alike.

One of the worst examples of this is the displacement and killing of thousands of people to make way for the giant American owned Freeport mine, the largest gold mine in the world, which has reduced a sacred mountain to a crater and poisoned the local river system.

Indonesia guards West Papua aggressively not allowing journalists, diplomats or human rights workers into the country. The massive US owned Freeport McMoran gold and copper mine in West Papua is one of the Indonesia’s largest taxpayers. The US, UK, China, Japan, Indonesia, South Africa and Australian have mining interests operating in West Papua.

The Indonesian Military along with global corrupt governments, and associated transnational companies, are supporting the oppression of the West Papuan people to ensure they maintain control of West Papua’s rich natural resources.

Exploitation and Genocide in West Papua

Estimations of over 500,000 indigenous West Papuans have been murdered over the last 54 years. This also includes reports of wide spread torture of women and children.

The United Nations, European Union, and associated governments have received ample evidence of atrocities, massacres, torture, and crimes against humanity and chose to remain silent and complicit.

Australian refuses to talk about the genocide in West Papua due to their financial interests in the country. Australia supports Indonesia with 605.3 million AU dollars a year. They also train 100 Indonesian military officers a year at no cost.

Human Rights Abuses continue today and those who protest for independence openly in West Papua do so at a high personal cost. It is illegal to raise the morning star flag and many West Papuan leaders are sitting out long jail terms for peaceful acts of defiance.

Australia, a quasi-military ally of Indonesia through the 2006 Lombok Treaty (which was itself based on suppressing international support for West Papua), will find itself in an increasing awkward position: a self proclaimed promoter of human rights, yet a supporting actor in an occupation entailing crimes against humanity and genocide.

Australia and the world should be ashamed of their inaction.

For more information, or to get involved and help stop the genocide, please visit: