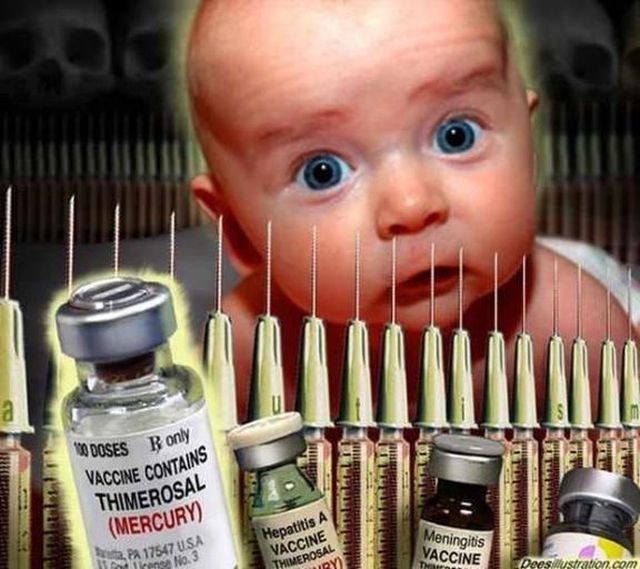 Before people lost track of a subject called logic, the fallacy called ad hominem was widely understood: ignore the substance of an argument; simply attack the person making the argument.

Barbara Loe Fisher leads a private non-profit US organization called the National Vaccine Information Center. She has worked for decades to bring truth to the issue of vaccines. Recently, she gave a talk titled, “Class and Race Profiling in the Vaccine Culture War.” Here are vital excerpts:

“The Vaccine Culture War is heating up. Ground zero is America, Europe and other economically developed countries, where the pharmaceutical industrial complex is raising an iron fist to protect multi-billion dollar profits by disempowering the people.”

“In America, professors and doctors in academia and government are profiling parents by class and race to shame and discredit those challenging vaccine orthodoxy. Elite members of the highest paid professions in our society are using academic journals and mainstream media to openly preach fear, hate, prejudice and discrimination against people who disagree with them about vaccination.”

“’When it comes to vaccines, rich parents get away with child neglect,’ the headline in the Washington Post proclaimed on May 10, 2017…”

“That ‘punish the mothers’ Op Ed was preceded by a May 8 Boston Herald editorial revealing just how far the persecution of people advocating for vaccine safety and informed consent has gone. The Boston Herald editorial staff called for the execution of individuals who exercise free speech about vaccine risks and failures. As in, it should be ‘a hanging offense’ to inform parents (especially to inform parents in ‘immigrant communities’) that vaccines carry an unpredictable risk of injury or death and often fail to work as advertised.”

“In 2011, Greg Poland, a University of Minnesota professor of medicine and vaccine developer at Mayo Clinic, profiled parents concerned about vaccine risks in the New England Journal of Medicine. He said, ‘Antivaccinationists tend toward complete distrust of government and manufacturers, conspiratorial thinking, denialism, low cognitive complexity in thinking patterns, reasoning flaws, and a habit of substituting anecdotes for data.’ Then he used a death image to invoke a thinly veiled threat. He asked, ‘What can we do to hasten the funeral of antivaccination campaigns?’”

“Trash talk has become the weapon of choice for a select group of professors and doctors using academic journals and mainstream media to humiliate and bully people who disagree with them about the science, policy, law and ethics of vaccination. In the 21st century, it has been going on in earnest since about 2004 when Centers for Disease Control (CDC) officials kicked off the Vaccine Culture War by asking this question in the Journal of Pediatrics: ‘Children Who Have Received No Vaccines: Who Are They and Where Do They Live?’”

“The CDC study authors played with the words ‘undervaccinated’ and ‘unvaccinated’ so mothers could be profiled by class and race. They said:”

“’Undervaccinated children tend to be black, to have a younger mother who was not married and did not have a college degree, to live in a household near the poverty level, and to live in a central city. Unvaccinated children tended to be white, to have a mother who was married and had a college degree, to live in a household with an annual income exceeding $75,000 and to have parents who expressed concerns regarding the safety of vaccines and indicated that medical doctors have little influence over vaccination decisions for their children.’”

“When doctors with big titles in government and academia put a target on the backs of parents and doctors opposing inhumane one-size-fits-all public health policies and laws, it gives a green light for legislators to do the same thing. In 2012, California pediatrician politician Richard Pan lobbied to eliminate the personal belief vaccine exemption for children to attend school. He told Associated Press that, ‘In private schools, these are people who have money, who are upper middle-class, and they are going on the Internet and seeing information and misinformation.’”

“In 2013, the flames of prejudice were fanned by an online publication profiling parents in a San Francisco community and labeling them ‘vaccine deniers.’ The parents were described as ‘wealthy, educated, liberal leaning’ and often working in ‘technology, law and other white collar professions that demand critical thinking skills,’ who put their children at risk by feeding them non-GMO organic food, taking them to holistic doctors, and paying $20,000 a year to send them to private schools where self-reliance, independence and critical thinking are taught.”

“So, by 2015, the narrative about parents being stupid and crazy for questioning the safety of vaccines had morphed into one profiling parents by class and race. The New York Times had no problem running the headline, ‘Rich, White and Refusing Vaccinations.’”

It’s not what you think, what you know, what your independent research has uncovered—no, no. It’s all about your profile. Your class and race profile is the only relevant factor.

What you know is merely a bogus affectation based on your class and race status.

Welcome to the ad hominem universe.

“We are official science. Everything we assert is true. Why? Because we are the class of the all-knowing. Anyone who doubts us is from a sub-class of morons. We can break down that sub-class by race and economic status. Then we can use those profiles to shame you into agreeing with what we say…”

It goes further than this, straight into the heart of actual racism:

“You’re black and poor and you doubt the safety and efficacy of vaccines? You obtained those ideas from people who are trying to harm you and your children. You see, you’re not capable of looking at the evidence and the facts yourselves. You’re eternal victims. You don’t have minds of your own.”

Yes, that’s where all this “science” leads.

On the other hand, if you’re “rich and white,” and believe that vaccines are dangerous, you’re simply acting out an elitist desire to separate yourselves from the bulk of humanity who understands the necessity of vaccination.

According to this perverse “analysis,” the only people who truly understand the facts are the princes of vaccination, the talking heads who front for the pharmaceutical giants.

https://crazzfiles.com/wp-content/uploads/2017/09/RAPPOPRT-VACCINE-WAR.mp3Podcast: Play in new window | DownloadSubscribe: Apple Podcasts | Android | Email | RSS On tonight’s podcast show 24/11/22 i am joined by researcher and author John Hamer to discuss and break down his incredible reasearch and books. John Hamer is back on the podcast with me tonight to continue our discussion about central[…]