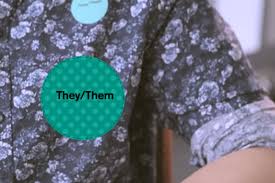 Turnbull government ministers have slammed a Victorian government department’s promotion of the first Wednesday of every month as “They Day” as an “affront to common sense”, and “political correctness gone mad”.

The Australian revealed today the Victorian Department of Health and Human Services has urged its 10,000 staff to avoid “gendered” language and instead refer to others using neutral pronouns such as “they” or “them”.

The department issued staff with stick-on badges featuring preferred pronouns and produced a short film to highlight the issue.

Home Affairs Minister Peter Dutton said it was rude to refer to people as “they”.

“Of course it is, and this whole industry that you see come out of government departments, out of universities, it’s an affront to common sense, and we should call it out,” he told 2GB.

“A lot of good people you meet right around the country just shake their heads at this and say, ‘how can we allow this nonsense to continue?’, but good people need to speak up and we need to stare this down, because this is a significant movement, there are people making fortunes out of all this garbage.

“The Victorian government, I think, has completely lost the plot. The whole gang, refusal to acknowledge gang violence, and people of African descent being involved in gangs in Victoria. Now this garbage.

“We need to push back against it, and nobody tolerates any sort of racial abuse or discrimination on the basis of gender or anything else, but our kids are taught to have respect for each other, they’re taught to have respect for themselves, and this invading the minds of young people with this sort of garbage message, I think really, we need to push back against it because it is creeping into different parts of society, and there are other priorities that the Victorian government should have, other governments, including the federal government.

“This is not a priority for us. We need to make sure there’s no discrimination, but the money that’s spent on all of this could be well and truly spent on other areas that could be more productive, and as I say, good people need to speak up because a silent majority at the moment aren’t being heard on this stuff.”

“Next they’ll be saying you can’t call somebody a ‘mate’,” Mr Frydenberg said.

“That would be really unAustralian.

“Let’s focus on the important issues in people’s lives: reducing people’s power bills, creating jobs and improving their security and their safety on the streets.”

Victorian Equality Minister Martin Foley, a strong proponent of the language guide, declined yesterday to comment on They Day or whether he would encourage its rollout more broadly. A spokeswoman for the department said the Pride Network did not receive government or departmental funding for the event or the film, which features staff from various departments speaking about their preference for neutral pronouns.

“DHHS is proud to be an inclusive workplace,” the spokeswoman said.

According to its latest annual report, the department is in the process of working towards achieving a “bronze” employer award in the Australian Workplace Equality Index in recognition of its LGBTI inclusion initiatives.

It is also considering labelling bathroom facilities to meet the specific needs of LGBTI employees who are non-binary, gender-fluid, transgender or intersex. The Pride Network is a volunteer organisation that has previously received one-off department funding to help acknowledge events of significance, such as World Aids Day and the International Day Against Homophobia, Biphobia, Intersexism and Transphobia.

It is understood that other departments will consider adopting They Day.

2 thoughts on “They Day slammed as ‘political correctness gone mad’”