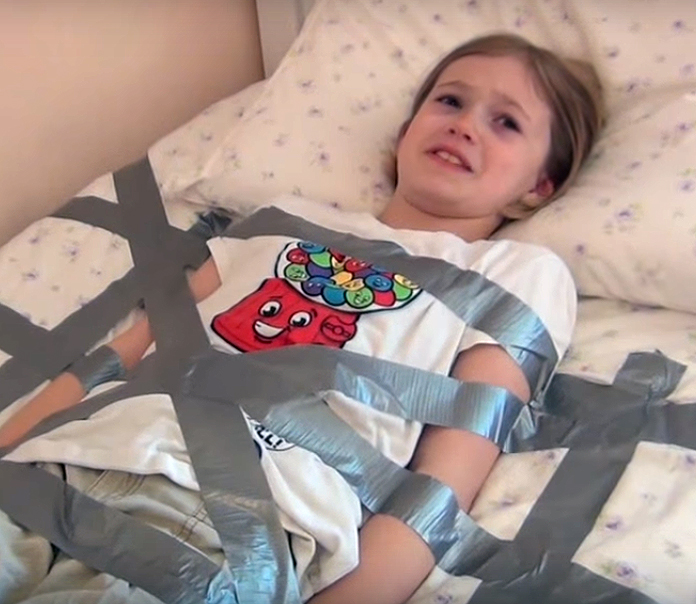 The YouTube channel SevenSuperGirls features tween girls doing random stuff. However, it also appears to be custom-made for pedos. Even worse, the channel is recruiting young girls on the internet.

In my article entitled Something is Terribly Wrong With Many “Kids” Videos on YouTube, I described the numerous ways videos aimed at children can be toxic and disturbing. Unfortunately, that was only the tip of the proverbial iceberg. And that iceberg goes deep. And it stinks. It is basically a terrible iceberg.

A segment on the comedy show Tosh.O exposed a YouTube channel named SevenSuperGirls which contains thousands of videos featuring young girls doing “cute” things. In his segment, Tosh.O claims that he might have stumbled on to “something dark” while adding that those who watch that channel should “put on their pants and report themselves to the FBI”.

Jokes aside, there is clearly something dark about that channel – not only due to its contents but due to how it attempts to recruit new girls by requesting audition tapes.  It doesn’t take a lot of imagination to picture how things can go horribly wrong for the girls involved. Especially when one understands the system behind the channel.

At face value, SevenSuperGirls appears to be a “tweens” channel aimed at young girls who want to see girls their age doing random stuff. However, it is difficult NOT to see the appeal the videos could have to adults who want to ogle underage girls in all legality.

The channel description even states that it is the “largest all-girl (under 18s) partner collaboration on YouTube”. Here’s a screenshot of the channel’s description. As you can see, the channel boasts nearly 7 million subscribers and over 7 billions views. That is massive.

This description is oddly similar to something one would find on an adult site.

As the name of the channel implies, SevenSuperGirls consists of seven girls who each have a sub-channels on which they post videos. In most of these videos, the girls act in an overly childish or bratty matter, while wearing evocative outfits. A ridiculous number of these videos feature the girls – who are aged between 8 and 12 years old – wearing bikinis and leotards. Why? Is that necessary to capture the attention of young girls? No. But it is necessary to capture the attention of creeps.

While I feel uncomfortable posting screenshots of these “videos” here, they are needed to illustrate how the channel obviously caters to specific “adult” fetishes. To find these screenshots, I did not need to scan hundreds of videos in order to find outrageous stuff. I simply played some of the most watched videos on the channel and captured tons of images in a matter of minutes. In other words, this article could have been much longer and filled with hundreds of screenshots, each one more disturbing than the other.

For starters, here’s a screenshot from the #1 most viewed video on the channel. It has 138 million views – a number that rivals music videos by international pop stars. Does it feature lit dancing and fire music? Nope. It features this:

Here are screenshots from other videos.

My previous article also contained a screenshot of girls wearing a mermaid suit. It there a secret fetish market for underage girls in these costumes? I hope not.

Who comes up with these scenarios? Don’t the parents of these girls find them extremely inappropriate?

In the video How to Get on SevenSuperGirls!, young girls explain how the recruitment process works. It is a rigid and specific process.

Indeed, girls who want to be part of SevenSuperGirls must first apply to one of the sister channels that are part of a larger entity called SAKs Channels. The sister sites are SevenGymnasticsGirls, SevenPerfectAngels, SevenAwesomeKids, SevenFabulousTeens, SevenFuntasticGirls, SevenCoolTweens, SevenTwinklingTweens and SevenEpicDancers. These channels are all filled with hundreds of videos similar to what is found on SevenSuperGirls.

Therefore, SAKs created a system where it obtains audition tapes from young girls, recruits the most promising ones within its ranks and transfers those who have “what it takes” to SevenSuperGirls. That is one sketchy thing to get young girls involved in. The recruitment video even states:

“Beware of the fake SAKs channels. There’s hundreds of them.”

What kind of people would create fake channels to trick young girls into sending audition tapes? You know exactly who.

One thing is for sure, in order to get audition tapes accepted by SAKs, strict guidelines must be followed. The video SAKs Guide to Auditions details these requirements (though I wouldn’t watch the intro of that video in public).

Here are some of the requirements: Girls cannot hide their faces; They must include head-and-shoulder shots, half body shots, and full body shots; They must “include some action” (i.e. dancing or swimming). A girl in the guide video even says:

“Think about how you look. Try to look your best.”

Why though?? Here’s another requirement posted on the channel’s Weebly page:

“If you’re auditioning for SevenGymnasticsGirls, try to wear a leotard. Remember that they need real gymnasts.”

Parents of young girls should probably be leery of sending videos of their children wearing leotards to complete strangers on the internet. Maybe I’m just old-fashioned that way.

A NY Times article about SAKs explains how one of the girls ended up singing with Nickelodeon. It also sheds some light on the company.

“The SAKs channels, as they are known, were started in 2008 by seven families in Britain who, in the early days of YouTube, wanted to make sure their children were making family-appropriate content. The only remaining parent of that original partnership is Ian Rylett, who is currently in charge of the SAKs operation.

Mr. Rylett, who lives in Leeds, said producing the channels was essentially his full-time job. He and a team of six others take care of copyright issues, create sponsorship deals, come up with weekly themes, monitor the channels and arrange meet and greets. The tickets for a 1,000-seat event that is coming up in Orlando, Fla., are selling for $30 each.

Mr. Rylett receives an income from the channels, as do some of the girls. The girls own their own content, he said, but they have not signed contracts.”
– NY Times, With Hair Bows and Chores, YouTube Youth Take On Mean Girls

While, in 2008, the goal was (reportedly) to produce “family-appropriate content”, the goal probably shifted once 6 of the 7 families involved in SAKs quit. The channel now appears to be banking on the fine line between “family-appropriate” and “perv eye candy”. Furthermore, SAKs also generates lots of revenue with “real life” events.

In a Tosh.O comedy skit, Tosh goes to one of those events while spoofing the show “To Catch a Predator”. An older dude comes in and Tosh asks the guy to “take a seat”. The skit implies that these events are filled with creeps. He’s probably right.

While the channel SevenSuperGirls appears to be aimed at young girls, it doesn’t take much of a stretch of the imagination to see who else it is aimed at. Several videos appear to cater to specific “adult” fetishes and, judging by some of the creepy comments left by viewers, some of them really LOVE these videos.

Meanwhile, young girls looking to be the next SevenSuperGirl are told to send in videos of them “in action” while including “half-body” and “full body” shots while “looking their best”. These videos end up in the hands of who-knows-who and the girls who are successfully recruited could end up who-knows-where. In short, SevenSuperGirls is yet another example of a “wholesome” YouTube channel that is actually a gateway to a dark and exploitative underworld.