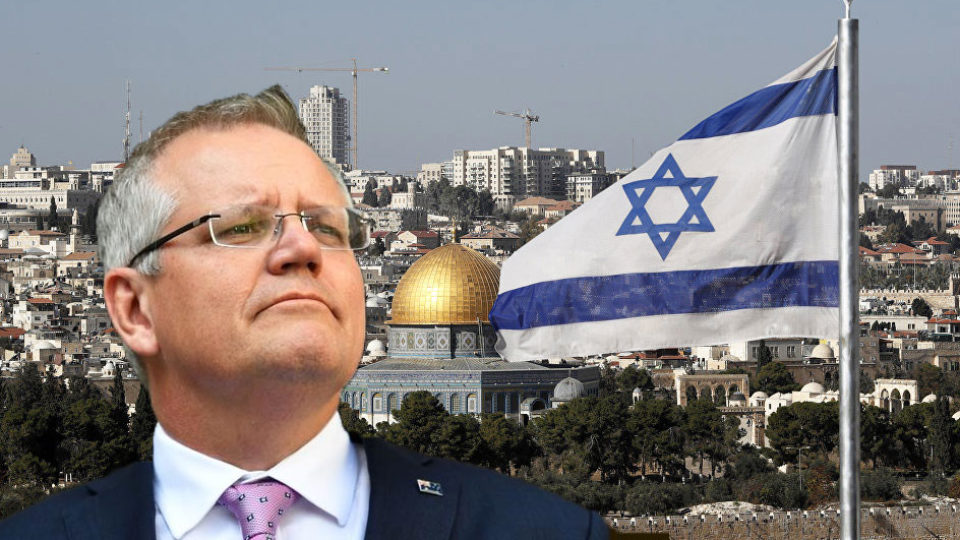 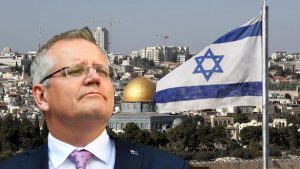 Australia may move its embassy in Israel to Jerusalem from Tel Aviv, following US president Donald Trump’s lead.

Scott Morrison faces his first electoral test as Prime Minister on Saturday. The Liberal Party is in danger of losing the seat vacated by Malcolm Turnbull, once one of its safest.  Morrison has just shown that he is absolutely desperate to avoid this possibility.

The seat of Wentworth has a relatively big Jewish population of about 12 per cent.  Morrison on Tuesday proposed two possible changes to Australian foreign policy designed to pander to them specifically. The effect is simply to appear to be wrapped in the flag of Israel.

And he’s done it by echoing Donald Trump positions, but not actually acting on them. Trump moved the US embassy in Israel from Tel Aviv to Jerusalem. Why? To gratify Israel’s Prime Minister Benjamin Netanyahu and to shore up the conservative right wing of the Republican party.

So Morrison has floated the possibility of Australia changing its policy to move the embassy in Israel from Tel Aviv to Jerusalem. If he does actually follow through, Australia would join Guatemala in mimicking the US and become the first significant country to do so.

Trump withdrew US support for the deal that blocks Iran’s nuclear weapons program. Why? To gratify Israel’s Prime Minister Benjamin Netanyahu and to shore up the conservative right wing of the Republican party. So Morrison has announced that Australia will reconsider its support for the deal.

Why not? They’re not axiomatically bad ideas just because Trump embraced them. But they are the policies of a foreign country that are fundamentally ill-suited for Australia.

The US can be stridently, uniquely pro-Israel because it’s America. It’s a superpower. Australia is not. And America’s key strategic approaches are not dominated by the world’s biggest Muslim-majority nation. Australia’s are. Indeed, Australia’s only strategically significant neighbour happens to be Indonesia. Indonesia’s political system is primed to take offence from Australia at any time. Politicians earn easy credit points by kicking Australia; they earn nothing by supporting it.

So Morrison has just invited a kicking for Australia in Jakarta. Worse, he’s made it hard for Indonesia’s President Joko Widodo to pursue a positive relationship with Canberra.  The President, known universally by his nickname Jokowi, is a friend of Australia. He has been pressing his government to conclude a free trade agreement with Australia. He proposed that Australia be permitted to join ASEAN.

Australia depends on Indonesia for vital cooperation on counter-terrorism. Australia’s policy of stopping the boats, Morrison’s greatest achievement, can only work with Indonesia’s acquiescence.
But for his own political survival Jokowi will now need to distance himself from Australia so long as Australia has a prime minister wrapped ostentatiously in the Israeli flag.

And anyone anywhere in the world who wants to dismiss Australia as a mere lap dog of America’s, a deputy sheriff to Donald, need only point to this.

Morrison, no doubt, knows all this. He must know how much he could be putting at risk. That’s why he’s only flirting with these ideas, not actually embracing them.

That’s why it’s irresponsible. Why is it stupid? Because the Jewish vote in the seat of Wentworth is solidly with the Liberal candidate, Dave Sharma, already.  The Liberals won’t gain any significant number of Jewish votes that aren’t already theirs. And Israel already considers Australia to be one of its best friends in the world.

The Jews of Wentworth shouldn’t feel gratified by Morrison’s gambit. They should feel insulted. He’s gaming them. And besides, he’s not committing to these policies, only toying with them. Who knows? Today he’s pitching for one ethnic and religious minority’s support, tomorrow he might be chasing another. In a general election he might need to court the Muslim vote on the other side of Sydney.

If he’s prepared to risk Australia’s vital interests for the Jewish vote in one seat, how far would he go for the Muslim vote in half a dozen seats? This is unprincipled and craven politics of a low order. And you probably thought Australian politics was as bad as it could get. It seems that there is no expectation so low that it can’t be disappointed.