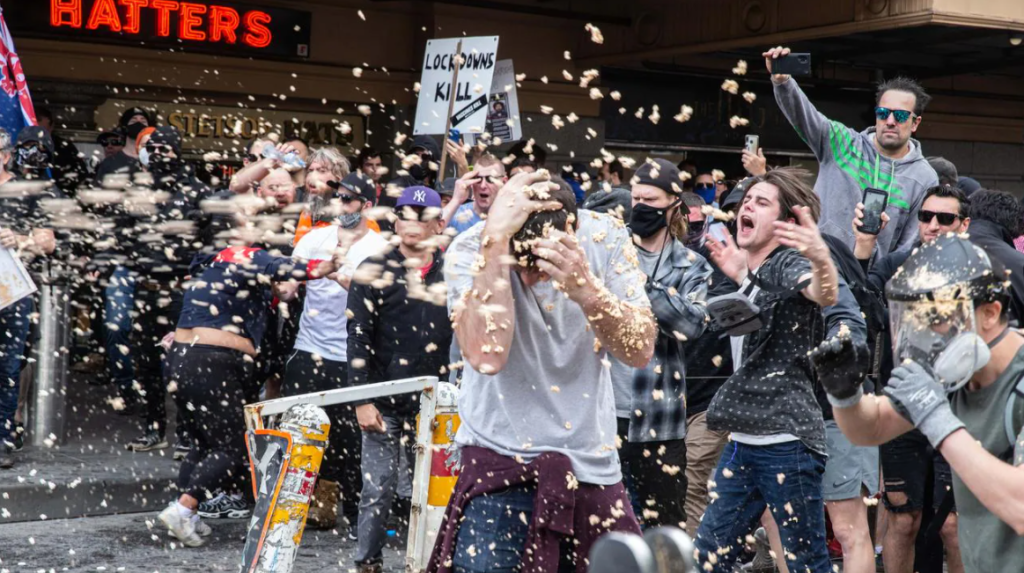 This page is constantly being updated.

Here’s some vision of the anti-lockdown protest in Melbourne, where there have been arrests.

As was witnessed at the last rally in Sydney, most of the group was largely peaceful, with a small group at the front taking charge and causing the eruption. Mixed emotions everywhere today.

Protesters have been dispersed after a few intense hours. We’ve seen a number of arrests. On Telegram, organisers are hailing the rally a success and flagging another next month.

Protesters have been blocked by the riot squad, as a huge squad now engulfs the CBD.

2:15pm – A huge amount of tactical squad members have descended onto the city. Unbelievable shot.

Police want to end this quickly, calling in the big boys to go full steam towards the markets.

Melbourne rally almost into its third hour. Still families out. Numbers may have weaned slightly, but a core group still pushing on towards Queen Victoria Market now.

This video shows protesters using water to treat pepper spray to the eyes.

More pepper spray is used on protesters who continue past police line.

A number of people engaged with the first line of police physically, leading to a pretty significant scuffle and copious amounts of pepper spray being unleashed.

Consensus appears to be the front of the crowd was provoked after being sprayed at.

1:35pm – Police pepper spray protesters that get too close to line.

1:30pm – Protesters meet a wall of police on Elizabeth Street.

Protesters soon meet a police blockade. Powerful footage shows fed up Australians screaming in the faces of police officers; a mix of “join us” requests and anger.

1:00pm – Police begin descending upon the protesters to block them.

Scenes comparable to those found in the history books.

A large congregation of protestors moved fast down Russell Street in the CBD, flanked for a time by police mounted on horses.

12:30pm – Crowds begin to gather in the Melbourne CBD.

the crowd is screaming “freedom”. Most of the crowd aren’t wearing masks and loud music is playing. There are a few children among the strong crowd with their families.

After many arrests, blocked entries into the city, imprisoned suburbs, the protest has ended.

The remaining crowd did attempt to begin marching through the city, but were cut off.

Sydney never had a chance to get off the ground with an overwhelming presence.

1:00pm – On-the-ground footage of the group that made it in.

12:15pm – Small groups made it into the city, arrests continue:

A number of people walking past have been arrested, as journalists and police overwhelm. Still, remaining groups have made it in the city and gather opposite the park.

11:30am – Footage of police roadblock designed to prevent protests.

Almost every entry into the Sydney CBD has been blocked off.

We have received a number of reports that entry points into the Sydney CBD have been blocked by police, who announced yesterday that 1,500 police officers will be on-the-ground.

10:30am – Police begin setting up their massive operation in the CBD.

As part of ‘Operation Stay At Home’, authorities announced yesterday they will be out in force.