(NaturalNews) “Officially,” the U.S. national debt has frozen in time, though “unofficially” it continues to grow at a frenetic pace.

What’s going on? Did the federal government suddenly become fiscally responsible and we are no longer accumulating country-destroying debt?

If you believe the U.S. Department of the Treasury, yes. As reported recently by CNS News, the national debt froze for more than 21 days.

Hiding the true damage by making up numbers as they go

In a March 13 letter to House Speaker John Boehner, R-Ohio, Treasury Secretary Jack Lew explained that he was planning to declare a “debt issuance suspension period.” That was required, he explained, because in 2014 Congress passed legislation that “suspended” the debt limit until March 15, but reinstated it again on that date at whatever level the debt had reached at that time.

“As you know, in February 2014, Congress passed the Temporary Debt Limit Extension Act, suspending the statutory debt limit through March 15, 2015,” Lew said in his letter. “Beginning on Monday, March 16, the outstanding debt of the United States will be at the statutory limit. In anticipation of reaching that date, Treasury has suspended until further notice the issue of State and Local Government Series securities, which count against the debt limit.”

What are State and Local Government Series securities? According to the Congressional Research Service they are “customized securities available for state and local governments to hold proceeds of bond sales.” They are further considered to be part of the federal government debt held by the public. 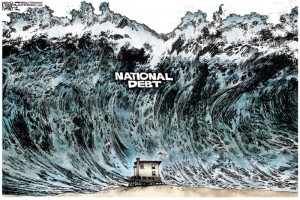 “Because Congress has not yet acted to raise the debt limit,” Lew continued in his letter, “the Treasury Department will have to employ further extraordinary measures to continue to finance the government on a temporary basis. Therefore, beginning on March 16, I plan to declare a ‘debt issuance suspension period’ with respect to investment of the Civil Service Retirement and Disability Fund and also suspend the daily reinvestment of Treasury securities held by the Government Securities Investment Fund and the Federal Employees’ Retirement System Thrift Savings Plan.”

Some of these same actions have been taken before, during earlier periods when the debt seemed to freeze in time.

Wait – what about the Ponzi schemes?

In a separate report entitled, “Reaching the Debt Limit: Background and Potential Effects on Government Operations,” the CRS further explained:

Under current law, if the Secretary of the Treasury determines that the issuance of obligations of the United States may not be made without exceeding the debt limit, a ‘debt issuance suspension period’ may be determined. This determination gives the Treasury the authority to suspend investments in the Civil Service Retirement and Disability Trust Fund, Postal Service Retiree Health Benefit Fund, and the Government Securities Investment Fund (G-Fund) of the Federal Thrift Savings Plan.

In other words, in order to avoid exceeding the congressionally set debt limit, which is codified in statutory law, the Treasury secretary has the authority to simply cook the books and then “declare” that Uncle Sam is no longer accruing any debt.

So, why doesn’t the government just “declare” that it no longer even has any debt? Because it does – the federal government owes creditors, many of whom are foreign governments, and cannot simply whitewash them away.

The Treasury also engages in Ponzi schemes. Click here to see how these financial “geniuses” get creative with the numbers, in order to avoid telling Americans just how bad things really are.