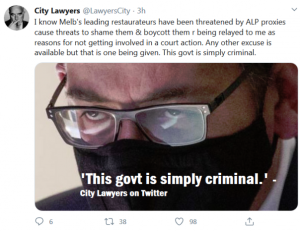 THUGS working for the Victorian Labor Party are reportedly threatening restaurant owners with “shaming” or “boycotts” for joining legal actions against the Andrews lockdown.

The lockdown and curfew were never ordered by the state’s chief medical officer Brett Sutton, nor the police commissioner, despite Andrews lying to the public that they were.

Ferrara’s lawsuit is being filed by US and Sydney law firm Emanuel Urquhart & Sullivan and can be joined by all businesses shut down after July 1, when Andrews ramped up the so-called second wave with mass COVID testing.

Mrs Loielo says the stage four lockdowns have cost her 99 per cent of her business, in addition to having her rights to freedom, liberty and security violated.

After the action went public her social media was bombarded with abuse and her café page suddenly flooded with one-star reviews.

Mr Ferrara said Victorian businesses “don’t need charity or kind thoughts from politicians. We need certainty and we need it soon. Our situation is not our doing. We are calling to account those who put us in this dire position.”

Sky News commentator Andrew Bolt was staggered by the actions of cult-like Andrews defenders, who are putting up banners on their homes in support of the dictator.

He noted that Victoria was the state that turned anti-government rebels like Ned Kelly and Peter Lalor into heroes. “But now if you simply refuse to wear a face mask in the open air, outside in the sun … that is now seen as treason.

That will not just get you handcuffed by the police, but denounced by the ABC in Victoria, and by Victorians who are licking the jackboots of the most authoritarian premier ever seen in this state or probably any other.”

THE German lawyer who won major lawsuits against Volkswagen and Deutsche Bank is taking on his own government over its disastrous measures to allegedly combat COVID-19.

The complaints are highly relevant to the illegal shutdown of Victoria’s economy by the rogue fascist premier Daniel Andrews, aided and abetted by major media who whitewash his coup with daily press conferences citing all sorts of dubious case and death statistics.

Dr Reiner Fullmich and his Corona Virus Investigation Committee have been hearing experts and witnesses in weekly meetings on a wide range of issues concerning the virus, the crisis management and the consequences.

Of particular interest to the law firm is the collateral damage of the lockdown, which has not yet been evaluated in detail, but will be examined in greater detail.

Dr Fullmich is calling Germany’s response “the corona scandal”, a title that can be applied to most government responses, as “guided” by the WHO, the CDC and other global entities associated with and funded by the Bill and Melinda Gates and Rockefeller foundations.

It appears this major development has prompted renewed panic messages from the World Health Organisation with warnings of “a new COVID wave” coming into the European winter.

But Dr Fullmich says a large number of studies have shown that COVID lethality and mortality are similar to influenza. “Throughout the entire coronavirus measures, the German health care system was never overwhelmed,” he says.

“However, the government’s coronavirus measures, which were imposed in a great panic, have caused massive social, psychological, health, cultural and economic collateral damage. This is becoming increasingly clear and is in particular due to the lockdown.

“We are seeing millions of additional unemployed and short-time workers, companies in bankruptcy, excess mortality among the isolated elderly, reduced health care services for the general public due to a large number of postponed operations and a lack of doctors visits due to fear, an increase in suicides, a large elevation of child abuse cases, general traumatisation and ‘new’ anxiety-ridden social behaviour.

“Many basic rights have been restricted as a result of hastily enforced legal changes. Due to the new legislation, the federal and state governments are authorized to restrict civil rights beyond the end of this pandemic.

“Furthermore, democratic processes have been shortened and suspended (e.g. postponed elections). Our liberal democratic structures have been changed. Democracy has thus suffered great damage. Many people feel that the measures taken were degrading and discouraging.”