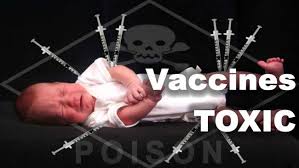 Here is an interview I did on maxresistance.com and fprnradio.com. It was a great experience and I feel we touched on many of the non disclosed aspects revolving around vaccines and immunizations. Please Share This Information.

Our Resistance Round Table guest Experimental Vaccines was amazing. EV Kenny works with develop disabled and mentally ill patients and children with behavioural issues. EV noticed most of those he has worked with were in some way or another connected with vaccines and the damage they have done to so many people. He began researching in depth on the effects of vaccines just after his encounter with a bad vaccine at the age of 19.

Here are an array of topics we talked about and discussed over the 2 hr period of the show. It was fast hitting and shocking to learn so much of the information being uncovered about the bad effects of the vaccines on the populace.

– in Australia, transfer payments are limited to families who refuse to vaccinate

– children who have just received a vaccine are more contagious than unvaccinated children – re: Disney Measles outbreak

– Scientists now pressing that delaying breastfeeding to boost vaccine efficiency and how ridiculous that sounds.

– during MMR testing, they did not test for SV40

– Kenny asked audience for vaccines inserts from their area

– Event Skeptic asked about the efficacy of the Hep B. vaccine which is given to infants

– We talked about how fear pushes legislation through

– the use of human diploid cells from aborted fetal tissue

– Kenny went through the vaccine exception and media summary where adjutants are detailed and discussed the senator lying.

– discussed efforts (SB 540) to get rid of exemption forms altogether

– how vaccine trials changed the time frame, thus skewing the length of time measured between shot and adverse results

– how several auto-immune diseases, ie. Guillane Barre could actually be polio in another form

– social media efforts to promote clean vaccines and how there is no such thing, and Alex Jones is promoting dis-info

– is there any value in a vaccine, Kenny said the fundamental way of how vaccines work would say no value

In summary I have to add there were several times during the show the panel had a lapse in response. The information is so resounding and informative how can you dispute the documented facts on the subject. I believe we were all set back by how very informed and educated on the facts EV is there is no way to argue the details.

In closing I only wish my doctor was as well informed and had actually researched the information as much as Experimental Vaccines has. An amazing guest and astounding information.