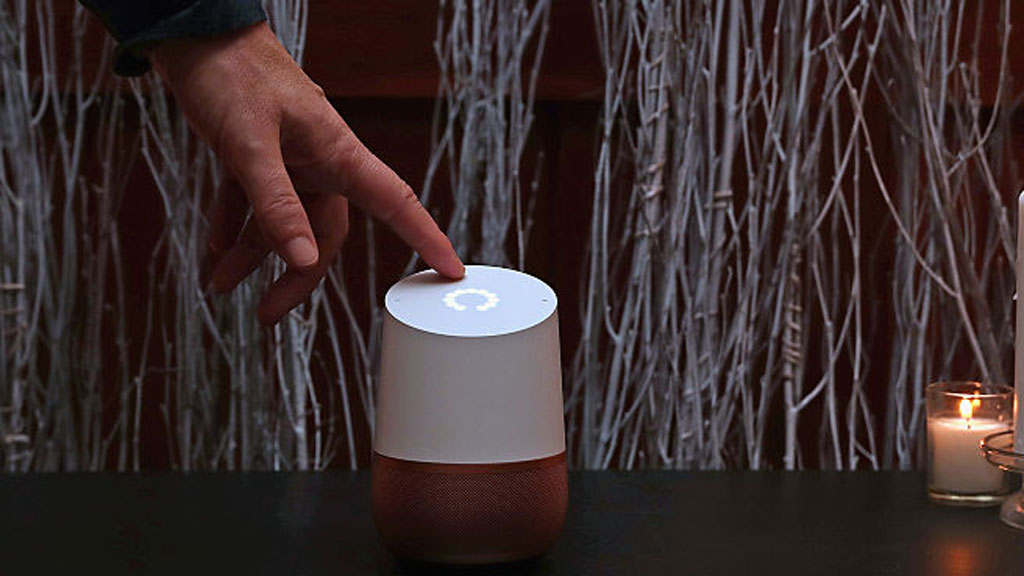 Google Home (GH) is always listening to everything that goes on inside your home. It’s like paying the NSA, sorry I meant Google, $129.00 to bug your home. Click here & here to find out about Google’s close relationship with the NSA.

GH does more than listen to music, it can control your lights, thermostats, radios, TV’s, smart refrigerators, smart plugsand more. GH has partnered with Nest, Phillips, IFTTT and Samsung who also makes the ‘family hub refrigerator‘.

Google Assistant’s new surveillance feature called “My Day,” gives you morning updates, weather, commute times and a summary of your schedule (assuming you opt in).

At least GH doesn’t have SEVEN microphones like Amazon’s Echo.

“Amazon Echo runs on Amazon Web Services. In the default mode the device continuously listens to all speech, monitoring for the wake word to be spoken.’

Just how invasive is GH?

‘Always on’ devices are always listening

Voice Search (Google Assistant) uses pattern recognition to transcribe spoken words to written text. For each voice query made to Voice Search, we store the language, the country, the utterance and our system’s guess of what was said.

A Computerworld article warns everyone about the dangers of ‘always on’ devices.

“There are plenty of privacy issues with this type of always listening technology,” said Dan Olds, an analyst with OrionX, a technology analyst firm. “It’s obvious that any device that is always listening could also be always storing and always analyzing anything that is within earshot of the receiver.”

“It could give Google a hell of a lot more personal data about users than they get now,” he said. “That microphone will be a witness to every verbal interaction in the home. It will also know what you watch on TV, what you listen to, and, obviously, when there’s no one home” Olds said.

Can Google be trusted not to spy on our conversations?

“Without consent, Google’s code had downloaded a black box of code that – according to itself – had turned on the microphone and was actively listening to your room,” said Rick Falkvinge, the Pirate party founder.

“Which means that your computer had been stealth configured to send what was being said in your room to somebody else, to a private company in another country, without your consent or knowledge, an audio transmission triggered by … an unknown and unverifiable set of conditions” Falkvinge said.

The FBI could be wiretapping ‘always on’ devices

Earlier this year, Matt Novak from Gizmodo filed a Freedom of Information request with the FBI, asking if they had ever wiretapped an Amazon Echo. The FBI’s response, “we can neither confirm nor deny…”

GH identifies people in your personal pictures and videos

According to a CNET article, GH knows what pictures you have and you can bet they’re using facial recognition to identify everyone.

You can tell GH to show you your photos on your TV, and if you say “Show me the photos from my wedding” Google’s assistant is supposedly smart enough to find those shots without any extra help on your part.

According to an article in Quartz, Google’s AI helps the camera pick the best image in a burst, and recognize faces to make collages of friends and family. The article goes on to warn everyone, that Google’s future is about remembering everyone’s personal information and identifying images.

Google’s “FaceNet” which stores over 260 million faces, claims to be 86% accurate in identifying people’s faces. So it’s no stretch of the imagination to assume Google has identified EVERY person in your pictures.

For example, facial recognition helps users of the Find my Face feature to see suggestions about who they might want to tag in a photo or video they’ve uploaded and would like to share.

Do you still trust Google and Amazon not to spy on everyone?

Last year, I warned everyone that “smart” devices and homes were spying on everyone.

Apartments and homes are being designed with over 40 “smart” (surveillance) devices.

IOTAS partners with property developers and owners, to install apartments with smart outlets, light switches, and motion sensors before they’re rented. The typical IOTAS apartment has about 40 sensors in it!

Many of these “smart” devices use biometrics like voice, facial recognition and fingerprints.

I have an idea, why not have firefighters give out free Echo’s and Google Home devices with smoke detectors?

12 thoughts on “WAS “GOOGLE HOME” DESIGNED TO SPY INSIDE OUR HOMES?”