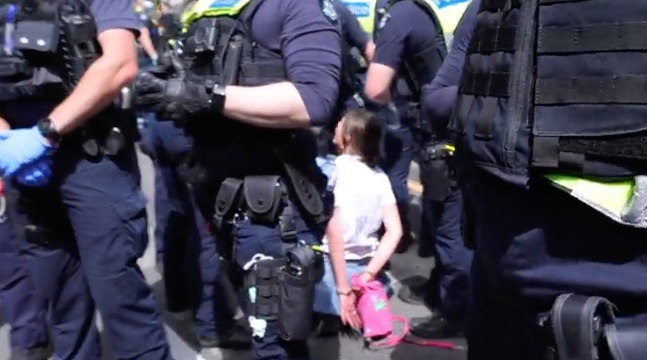 The next time anyone asks you why the Daniel Andrews’ government’s controversial Public Health and Wellbeing Amendment (Pandemic Management) Bill 2021 is worth fighting against, show them this video.

We managed to capture on camera the moment a young girl, clearly looking for her friend in a crowd of people, was SLAMMED to the ground for no apparent reason.

“It’s a little girl…. these f–king heroes!” said one bystander as the crowd began to realise what happened.

“There was two little girls sitting up on the bus stop. Cops come along, they hop down, and then they decided to bash the crap out of them,” said another bystander.

The girl violently thrown into the ground said she was looking for her friend when an officer attacked her.

“Three of the cops started grabbing and groping my mate, saying she’s arrested,” she said.

“And a cop goes BANG, shoved me on the floor and no one, no one will ever hold them accountable.”

The extraordinary pandemic powers bill is set for a vote in the upper house on Thursday. It would give the Premier additional powers to declare a pandemic at will and command the complete resources of the state to enforce authoritarian emergency laws.