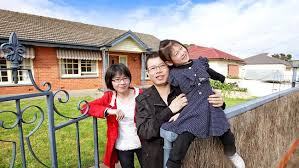 China is on the hunt for new food sources to feed its one and a half billion people and its central government has ordered $3 trillion be spent securing food and farmland overseas.

A significant share of that fortune is already flowing to Australia — a trend likely to increase with the signing of a Free Trade agreement with China last month.

The timing of the shopping spree couldn’t be better for the Chinese, with so many Aussie farms going broke. Banks are looking to sell properties and overseas buyers are eyeing off our clean, green land.

John Codrington, a business advisor who grew up on a farm in Moree, has been tracking the rate of foreign investment and says it is cause for alarm.

“The Chinese government has now relaxed their one child policy, which will mean that over the ensuing years we are going to see an increased in a number of mouths to feed in China and their agriculture industry over there won’t be able to feed them,” he said.

Nearly 50 million hectares of agricultural land has some level of foreign ownership – that’s an area twice the size of Victoria.

While there is no comprehensive national list of foreign investment in rural land, we do know that last year 69 countries bought a piece of Queensland, spending 1.7 billion dollars in total – and the biggest spender was China.