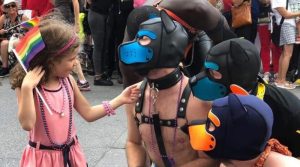 Honestly, I had no idea we would be living in this world when I was growing up. I did not expect that I would see sick, dangerous dogs that look like they should be locked in a basement in Pulp Fiction being heralded as great heroes of diversity, tolerance, and love. 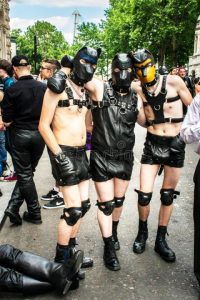 The photos above are just a small sampling of the many examples you can find. You will notice that these “pride” parades are all taking place in broad daylight in major cities, where lots of children are able to view what is taking place, and often these children are encourage to take interact with the freaks. This must scar and warp a child’s psyche for the rest of his or her life.

Hell, pederasts can make out with their victims on city streets, and as long as it is part of a pride parade, no one will object in the slightest. In fact, many of the people attending will applaud the “bravery”. 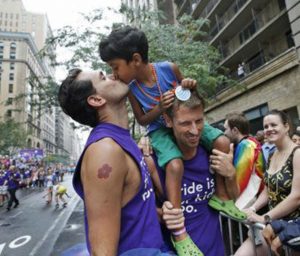 Far from doing anything to stop this child abuse from continuing, politicians in the Western world are doing everything in their power to ensure more of this takes place and are enacting legislation to hunt down anyone who objects.

Take, for example, the anti-White faggot Justin Trudeau, who led the Vancouver pride parade, pushing his child in a stroller. 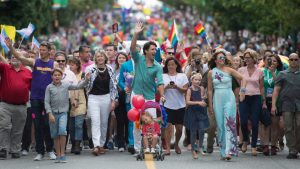 Trudeau also loves getting in some photo ops with half-naked sodomites. 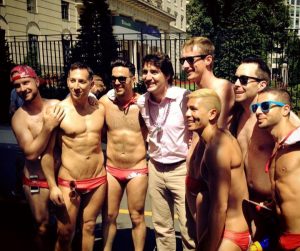 Not surprisingly, Justin Trudeau uses a well-known boy-raper symbol for his foundation. 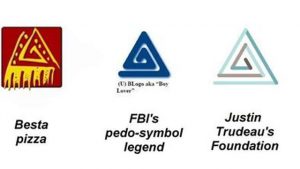 Although Trump is not openly marching in pride parades (unlike his buddy Roger Stone), he has done nothing to stop any of this criminal culture. In fact, Trump has made it a mission of his administration to go after any countries in the world that do not fly the rainbow flag of degeneracy and child abuse. 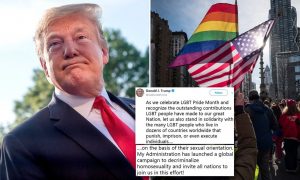 The United States government is not going to do anything to stop the abuse of children in the country since government officials are some of the biggest abusers. 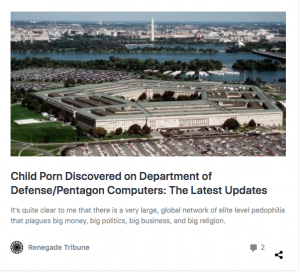 Just consider how many children go missing around Washington, DC. This information is from the Center for Missing and Exploited Children. The state of Virginia has by far the highest number of missing children per capita in the nation at 0.00467. The second highest per capita is the much larger state of Florida at 0.00175. This means that a child in Virginia is about 2.67 times more likely to turn up missing than in second ranked Florida. Most of the states run about 0.0010, making Virginia an 4.67 to 1 outlier. The state of Maryland nearby to DC is also quite high on a relative basis at 0.00179. Almost all the missing children were concentrated in Farifax County, Norfolk and Virginia Beach. Fairfax is one of the wealthier counties in the U.S. and, of course, has high concentration of government employees and officials.

I could go on and on about how the ZOG government, jewish media, anti-White academics and the rest are all in on this conspiracy to radically transform our society to one even worse than Weimar, Germany and abuse as many children as they can along the way, but I think you get the picture.

We need to get angry about this. We need to protect our innocent children.