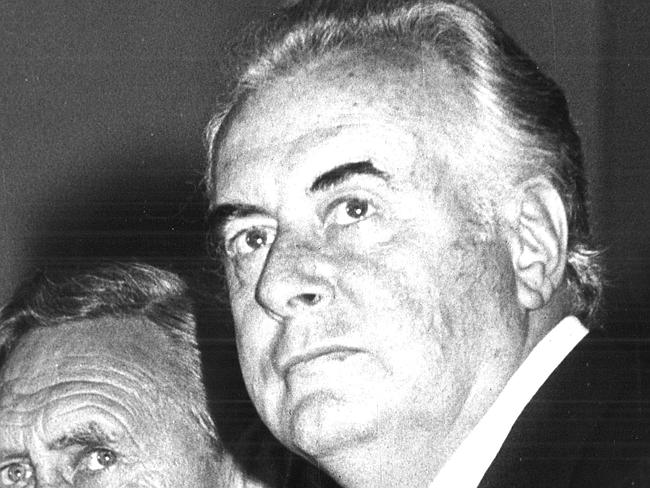 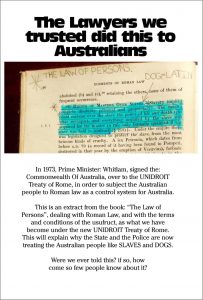 In 1973, Gough Whitlam, signed Australia over to the foreign: UNIDROIT Treaty of Rome, handing the Equitable Title of the mineral and energy wealth of Australia to a “foreign power”, head office Rome. Why do so few people know about this criminal act of treason and why are there so many lawyers in parliament that pledge their Oath to the foreign: CITY OF LONDON in order to hide the truth from the masses?

UNIDROIT uses the ALL UPPER-CASE debased corrupt DOG-LATIN text of Babylon (Rome), being foreign to the common law English language. DOG-LATIN is used for foreign Roman (VATICAN) military accounts. (Military Dog Tags) The UNITED-STATES was signed over to UNIDROIT in 1964, just after Kennedy was shot dead.
This fact was hidden from the masses.

UNIDROIT, dealing with the private contracts of Rome…

The sick reality of what the NEW WORLD ORDER really is ..

How do BANKS really work when “Money” and “DOLLARS” are completely separate “things”. A DOLLAR is a Military or Company Scrip, an internal bank note or promise to pay at some point in the future and only relates to the “internal” private account holders of such a private “corporate” banking entity. A DOLLAR is not money evidenced by the Latin meanings of both words: “Dollar” and “Money” The very word Bank, does not mean “Safe”, a bank is the edge of a river, that controls (Directs) the flow of current, (Currency) energy is current, dollars are the ACCOUNTS of debt currency, so a bank does not have money! it is the director of the flow of debt currency. (Debt titles being DOLLAR’s) The gold is you, being the dominion over the Mineral and Energy wealth that was originally granted to the living man and without you acting as the ACCOUNT holder of their bank, (Under a hidden TRUST-LAW-SPLIT-TITLE arrangement that renders you as the Legal Title holder of their ACCOUNT), they lose equitable rights over your Dominion because Dominion was never granted to a dead entity such as a corporation, “Dominion” was only ever granted to man and the Bank can only act as a commercial “agent” of living man on the condition such a living man has agreed or been deceived into acting as the DEAD ACCOUNT holder of such a BANK in order that the “Equitable Title” falls into the hands of the Bank. The BANK sits between your “Christian” name (CERTIFICATE OF BIRTH) and your “SURNAME” (STATE BIRTH CERTIFICATE) as an Agent-administrator of the Christian name (Christian ACCOUNT. being the separate CERTIFICATE OF BIRTH, birthed on the registration date), Once the BANK can deceive you into assuming that “their” SURNAME, that looks a lot like your heritage name, (“Smith” is glossed into “SMITH”) the bank assumes consent in order to confer the legal title of the BANK to their SURNAME that you assumed was your property. (ALL UPPERCASE TEXT is a foreign written language identified in article 11:147 of the: Chicago Manual of Styles 16th edition) Your surname glossed into a foreign SIGN language, is not your property! but when you attach your Christian name, being the name that is attached to your dominion, to their foreign ALL UPPERCASE SURNAME you, by your own consent, become subject to the ACCOUNT of their property … So simple but so effective and yet so biblically perfect once you violate the laws of the first GOD by serving the false God, GOD of the person-corporation. The POWER of TRUST-LAW is the greatest power of all… Trust Law is Master-Servant, relationship, it does not work backwards, it is the system of conferring debt ACCOUNTS onto the unsuspecting…

LEGAL TITLE can not be held by a living man. only a “Person” can hold Legal Title and what is a Person you may ask, it is the legal title holder of man. The only thing that created the “Person”, being a mask in a play, was the VATICAN: “ROME”.

The Word “Vatican” means: “vat I can”, meaning, “holder or vessel I can do”, meaning, the VATICAN has become the first Trustee Legal Title holder of the dominion of the living man. The VATICAN has become the beast of burden, it has no jurisdiction with living man because it agreed to act as the trustee… The VATICAN, that now held the Legal Title over the Dominion of man, offered the ACCOUNTS of the Legal Title to its own Persons by offering such a title to a living man and only when the living man was deceived into accepting such an ACCOUNT, did such a man become the “assumed debtor trustee person” of the world debts of the VATICAN and such acceptance of such an ACCOUNT was the “conformation” that granted Equitable Title back to the VATICAN because the living man accepted Legal Title, rendering the living man to fall into the jurisdiction of the DEAD ACCOUNT holder of the VATICAN beast instead of being the first trustee to the real GOD of living man. The VATICAN is the GOD of the dead persons because it was not God of man that created the DEAD juristic corporate Person, it was the VATICAN that created such a thing as the “Person”.

The VATICAN is the false GOD.