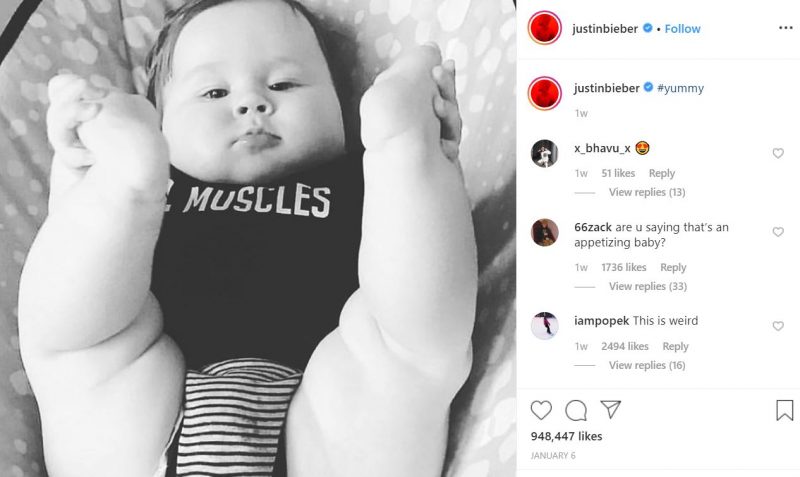 To promote his new single “Yummy”, Justin Bieber posted strange pics of random babies with the hashtag “Yummy.” Also, there are lots of references to pizzas. Also, the “Yummy” music video has a hidden message.

What is going on with Justin Bieber?

Justin Bieber released a new single called Yummy and it seems to be custom made to piss people off. For starters, the song’s brain-numbing hook is somewhat infuriating in its own right. It’s like it was written for toddlers:

However, the verses make it clear that the actual subject of the song is very adult and very sexual.

A headline from Elite Daily about the song’s lyrics.
Here’s an example of suggestive lyrics:

That jet set, watch the sunset kinda, yeah, yeah
Rollin’ eyes back in my head, make my toes curl, yeah,

Standin’ up, keep me on the rise
Lost control of myself, I’m compromised
You’re incriminating, no disguise (No disguise)
And you ain’t never runnin’ low on supplies

While Bieber is clearly not the first artist to release a pop song with sexual innuendo, the promotion surrounding the single makes things extremely weird and uncomfortable.

Here are some examples: It is now a widely known fact that “pizza” is a code word used in pedophile circles. It even became a meme in internet forums such as 4Chan.

To those who understand the sick codes of these people, the combination of the song’s lyrics with pictures of babies and the word “Yummy” written in pizza letters is difficult to ignore.

Another widely known meme associated with these creeps is pedobear. Here’s another post on Bieber’s IG account in the midst of the Yummy promotional blitz: To make things even stranger, the music video adds another layer of “what in hell?”

The music video takes place in a posh restaurant that is attended by posh-looking people. It’s the type of place people in the elite would go to.

At the beginning of the video, the camera lingers on children playing music:

The only children in the restaurant are the musicians. In other words, children are the “entertainment”.

While the children are playing, Bieber enjoys weird food with some weird-looking people:

Dining with the occult elite?

This older man is fed a strawberry by this older woman. Suggestive.

The final frame of the video explains what the food in the video actually represents. That frame is so symbolically important that it was also posted on Bieber’s Instagram account: A cake is eaten and reveals the face of a very young Justin Bieber … with the word “Yummy” underneath.

The final frame basically says that the dishes represent children. They are being “tasted”. And Bieber is a victim of the very system he is celebrating in the video.

What Is Happening With Bieber?

Some might wonder why Bieber is partaking in this is creepy and overt child-loving stuff while he could, like, not do it. The short answer is: He doesn’t have a choice.

Since the very beginning of his career, Bieber was always an industry pawn, with little or no control over his career. As the last frame of Yummy appears to say, Bieber himself might have been abused by creeps in the music industry.

Others wonder why Bieber – who is a devout and outspoken Christian – is partaking in this occult elite stuff. Indeed, there are lots of Jesus-related posts on his IG account (although weirdly mixed with creepy, Yummy-related pictures).

However, to get a better picture of what is happening here, we need to look at Bieber’s church: The powerful, star-studded Hillsong Church. Hillsong Church went from a small local church in Australia to an “international movement”.

The Church is famously attended by various stars such as Selena Gomez, Kylie and Kendall Jenner, Kourtney Kardashian, Vanessa Hudgens, Nick Jonas, Hailee Steinfeld, and Bono. All of them are pawns of the occult elite.

The founder of the church Brian Houston also has close ties with the political elite of Australia:

Hillsong Church has attracted support from high-profile politicians, especially from the Liberal Party of Australia. In 1998, Brian Houston met with then Prime Minister of Australia, John Howard, and most of his Cabinet, at Parliament House in Canberra before sharing prayers.

In 2002, John Howard opened the Hillsong Convention Centre at the Baulkham Hills location. In 2004 and 2005, the then Treasurer of Australia, Peter Costello, spoke at its annual conferences. – Wikipedia, Hillsong Church

All of this elite endorsement happened despite the fact that the Church has a dark secret: The father of the Church’s founder Frank Houston admitted to abusing several young boys in Australia and New Zealand. And the leadership of the Church did everything possible to cover-up this sordid affair:

Frank Houston, the father of Hillsong Church founder Brian Houston, was a pastor in New Zealand and Australia who abused as many as nine boys over the course of his ministry. In the 1960s and ’70s, one victim was routinely subjected to sexual abuse from the age of 7 to 12.

In 1999, his mother reported the abuse to the church. Although Brian Houston was legally obligated to report the crime, he did not do so.

The victim later testified to the Royal Commission into Institutional Responses to Child Sexual Abuse that Frank Houston offered him AU$10,000 as compensation at a McDonald’s in the presence of Hillsong Church elder Nabi Saleh.

During an internal church investigation, Frank Houston eventually confessed to the crime. The commission also heard that he was involved in the sexual abuse of other children in New Zealand.

Frank Houston resigned from his church in 2000, which then merged with Hillsong Church. Contrary to what is stated in Frank Houston’s resignation letter, he retired from the position of senior pastor of Sydney Christian Life Centre in May 1999 and was never employed by Hillsong Church.

In 2015, the royal commission examined allegations that accused Brian Houston of concealing his father’s crimes and censured him for failing to report his father to the police.

In November 2018, 60 Minutes aired a segment revisiting the sexual abuse scandal, because newly revealed documentation allegedly reveals that Brian Houston was deeply involved in a cover-up and that Frank Houston’s abusive behaviour was worse than initially thought.

Brian Houston allegedly used his position within the Assemblies of God in Australia denomination to conceal his father’s serial child sexual abuse.

The matter was referred to the New South Wales Police Force, which confirmed that Brian Houston was under criminal investigation for failing to report a serious crime. Following the 60 Minutes story, Hillsong released a statement in response to the allegations. – Ibid.

So, to circle back to the title of the article: Why did Justin Bieber tag babies “Yummy” on Instagram? Because he is a pawn of the entertainment industry which is controlled by some very sick people.

Since the beginning of his career, Bieber has been caught up in a never-ending whirlwind of strange, humiliating events and has often displayed bizarre behavior.

He’s always been a “whipping boy” of the industry and the face of crappy pop music.

With Yummy, the pattern continues. His handlers purposely turned Yummy into some kind of “child-lover” anthem by associating it with overt imagery and creepy Instagram posts.

In short, Bieber was used to push one of the elite’s favorite agendas: The normalization and the celebration of child abuse.

2 thoughts on “Why is Justin Bieber Tagging Babies “Yummy” on Instagram? The Answer is Sickening.”