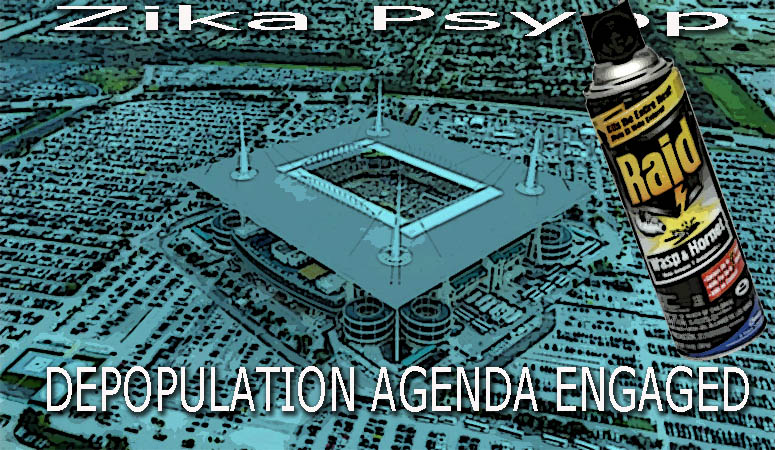 It’s official. The Miami Dolphins NFL football team has announced that this fall before every home game massive chemical pesticide spraying will be conducted to supposedly combat Zika virus, the totally benign virus which just recently (last year in 2015) was recreated by the mainstream media and turned into a scary killer virus which supposedly causes microcephaly in newborns.

This is mass genocide any way that you look at it as there is no such thing as a “safe” pesticide. Even worse than that is the precedent that someone at a very high level made this decision without approval from we the people:

The Miami Dolphins aren’t messing around when it comes to the Zika virus and the health of their employees and fans.

As a means to combat the virus, the organization has been aggressively using EPA-approved chemicals in and around the newly dubbed Hard Rock Stadium, where the Dolphins play their home games.

“All month, the Dolphins have been treating the 265 acres of property around the stadium, including parking lots, as a precaution, and in the interest of fan safety. The Dolphins are contracted with a pest control company that has followed CDC (Center for Disease Control) recommendations in its multi-step approach and are using products deemed safe for people, pets and aquatic life,” writes Joe Schad of the Palm Beach Post.The team is targeting areas where water drains, areas of standing water and basically anywhere else mosquitoes could potentially be found.

Backpack foggers are going to be used every two weeks. Additional treatments will happen two days before every Dolphins game, as well as any Miami Hurricanes games, that occur at Hard Rock Stadium this year, per the report.

So based on the power of the ministry of truth mainstream media Zika virus unproven claims the mass depopulation agenda is a full go in Miami and will be forced on innocent sports fans and anyone traveling or living near Hard Rock stadium in Miami.

I’ve been predicting a huge Zika virus psyop scare for this fall but I didn’t see this quick reaction coming at this level. Now hundreds of thousands of fans will be exposed to chemical pesticides they are told is deemed “safe” by the CDC. Mixed in these massive crowds will be pregnant women and unborn babies sucking up pesticides into their innocent and undeveloped nervous systems. This is undoubtedly intended to create what could be an epidemic of birth defects in Florida which will be blamed on, you guessed it, Zika virus. This is one of the most evil agendas imposed on innocent Americans and the whole process of jumping to conclusions about Zika virus was one of the most unscientific, knee-jerk, quick reactions to a non-problem I’ve ever seen. Frankly I believe this marks a dark and frightening moments in American history and for medical freedom and human dignity.

The tyrants are now imposing their genocide on all of humanity and these mass decisions are now based on whatever “stories” they want to conjure up. Science and reason no longer matters.

As I’ve written about for almost a year, Zika virus is a benign virus which is unrelated to microcephaly and birth defects as a whole. The cases of microcephaly seen in Brazil in 2015 (which is when this psyop began) was confirmed by doctors in Brazil to be associated with the northern region of Brazil heavily sprayed with pesticide.

All the research reports and literature clearly suggests that chemical pesticides = birth defects, sickness and health disorders. This relationship is undeniable. One investigative report in Brazil published by Reuters says the following regarding the results of chemical pesticide use in Brazil:

Since 2007, when Brazil’s health ministry began keeping current records, the number of reported cases of human intoxication by pesticides has more than doubled, from 2,178 that year to 4,537 in 2013. The annual number of deaths linked to pesticide poisoning climbed from 132 to 206. Public health specialists say the actual figures are higher because tracking is incomplete.

So how ironic is it that the fake “solution” for the Zika virus lie is more pesticide. Again, this is mass genocide and everyone should treat this as such.

Help spread the word to all Dolphins fans and all NFL fans and let them know it’s time to boycott these big sporting events. Don’t give these professional sports team owners if they are going to ignore science reason and more importantly medical freedom.

I repeat, the only way to fight back here is with education and by chosen where to spend your money.

Bernie is a revolutionary writer with a background in medicine, psychology, and information technology. He is the author of The Art of Overcoming the New World Order and has written numerous articles over the years about freedom, government corruption and conspiracies, and solutions. A former host of the 9/11 Freefall radio show, Bernie is also the creator of the Truth and Art TV project where he shares articles and videos about issues that raise our consciousness and offer solutions to our current problems. His efforts are designed to encourage others to joyfully stand for truth, to expose government tactics of propaganda, fear and deception, and to address the psychology of dealing with the rising new world order. He is also a former U.S. Marine who believes it is our duty to stand for and defend the U.S. Constitution against all enemies foreign and domestic. A peace activist, he believes information and awareness is the first step toward being free from enslavement from the globalist control system which now threatens humanity. He believes love conquers all fear and it is up to each and every one of us to manifest the solutions and the change that you want to see in this world, because doing this is the very thing that will ensure victory and restoration of the human race from the rising global enslavement system, and will offer hope to future generations.

@gus: Should this be correct then it seems Commo Joe is all out to protect h...
@gus: We in Australia have some choices. We must discard these New World Or...
@gus: State total control, socialism or Communism is effected by conquest an...
@gus: The Holocaust and the CoVid-19 pandemic are joined at the hip. They c...
@gus: More and more it is becoming very obvious that our Government and Main...
@gus: It never ceases to amaze me that our Governments are so ignorant. A s...
@gus: The old saying rings true. "You can fool some of the people sometime ...
@gus: Apologise as the above link has been edited. Must be hitting a nerve? ...
@gus: It has taken awhile for science to admit to the bleedin' obvious that ...
@gus: Total State Servility has arrived and we can thank ourselves for allow...