A 2011 report by Harvard Pilgrim Health Care, Inc. for the U.S. Department of Health and Human Services (HHS) stated that fewer than one percent of all vaccine adverse events are reported to the government:

Currently, data from the two experimental mRNA COVID injections that have been voluntarily reported is available for a two week period from the end of December through January 13, 2021.

The largest amount of deaths occurred in people over the age of 75.

There was at least one death recorded of an unborn baby dying just after the mother received an experimental mRNA Pfizer shot while pregnant:

I was 28 weeks and 5 days pregnant when I received the first dose of the COVID19 vaccine. Two days later (12/25/2020 in the afternoon), I noticed decreased motion of the baby.

The baby was found to not have a heartbeat in the early am on 12/26/2020 and I delivered a 2lb 7oz nonviable female fetus at 29 weeks gestation. (Source.)

As we have previously reported here at Health Impact News, the guidelines for emergency use of the experimental mRNA Pfizer injection in the UK warned pregnant women, and women planning to soon become pregnant, to NOT get the experimental jab.

But the FDA guidelines issued in the U.S. for the same experimental Pfizer injection did not include such warnings. See:

When reading the accompanying notes from these cases that were reported to VAERS, it is clear that many healthcare professionals are reluctant to report these cases, probably fearing repercussions for doing so.

In some cases, family members filed the report because the healthcare facility refused to do.

(VAERS ID # 913733) My grandmother died a few hours after receiving the moderna covid vaccine booster 1. While I don’t expect that the events are related, the treating hospital did not acknowledge this and I wanted to be sure a report was made.

(VAERS ID # 914621) Resident in our long term care facility who received first dose of Moderna COVID-19 Vaccine on 12/22/2020, only documented side effect was mild fatigue after receiving. She passed away on 12/27/2020 of natural causes per report. Has previously been in & out of hospice care, resided in nursing home for 9+ years, elderly with dementia. Due to proximity of vaccination we felt we should report the death, even though it is not believed to be related.

Since so few reports are actually recorded in the VAERS reporting system, what is the true number of people being killed by these lethal injections? For those who are not killed, how many will be crippled or suffer autoimmune diseases for the rest of their lives?

If during pre-COVID times less than 1% of all vaccine injuries and deaths were reported to VAERS, let’s make a conservative estimate and say that because it is widely known that the COVID injections were fast-tracked to market and have not yet been approved by the FDA, that a greater percentage are being reported, like 10% of the adverse reactions, including deaths.

We are looking at a pace of nearly 1000 deaths per week by injection due to non-FDA approved mRNA injections among nearly 40,000 cases a week of injuries due to these injections.

This is a public health crisis that is 100% avoidable and 100% caused by Big Pharma and the U.S. Government!

It is well known now that due to federal funding for COVID in 2020 that nearly all deaths were recorded as “COVID” deaths, even in cases where the death occurred by traffic accident, shooting, heart attack, etc.

Now we are seeing the exact opposite happen with the roll-out of the COVID experimental injections. NONE of them are being recorded as vaccine deaths. Why?

Our current system for capturing mortality rates can and does provide a mostly uninvestigated and inaccurate picture of what causes a death. The process for creating and registering causes of death for public records is a complicated, convoluted, politicized, completely open to both ignorance and the manipulations of personal, professional, and governmental interests.

I’m the one creating these statistics and I offer you this: If you take one thing away from this, take away a healthier skepticism about even the most accepted mainstream, nationally reported, CDC or other ‘scientific’ statistics.

What most people don’t know is that doctors are not allowed to attest to anything that is not a strictly NATURAL cause of death. (Full article.)

Criminal Charges for MURDER Need to be Filed IMMEDIATELY – Experimental Injections MUST BE HALTED!!

We are witnessing the mass murder of Americans right before our very eyes, and the genocide of our elderly population!

Complicit with these murders is the Pharma-controlled corporate media that not only fails to publish these statistics derived from a government reporting system, but actually publishes lies and fake news to encourage people to receive lethal injections.

As an investigative journalist, I have consistently presented the evidence that should be used to arrest and charge the criminals behind this atrocity which is nothing less than MASS MURDER, and crimes against humanity.

In the spirit and legal protection of the U.S. Constitution’s Bill of Rights, and the First Amendment which protects Freedom of Speech and Freedom of the Press to criticize public officials, here is the short list of government officials who need to be arrested immediately and have charges brought against them for intent to commit mass murder by lethal injections, among many other charges such as fraud.

There are literally thousands, if not tens of thousands that should be arrested and charged, but these are the top 3 most responsible and who should be brought to justice immediately.

The evidence against Anthony Fauci for mass murder is overwhelming. Not only does he profit from bringing an experimental mRNA vaccine to market, something he has worked on for decades together with Bill Gates, but he has publicly demonized safer, effective drugs already approved by the FDA, such as hydroxychloroquine, that many doctors have been using successfully to treat COVID patients.

He has used his public office at the NIH to bring great harm and death against the American people, by capitalizing on so-called “health crises” such as COVID, and HIV in the past.

For more of the evidence against Anthony Fauci, see:

Stephen Hahn was appointed by President Trump to lead the FDA, and his actions prevented doctors across the country in emergency room and hospital settings from using safe, already approved by the FDA, drugs that doctors were saving lives with, such as hydroxychloroquine and ivermectin.

In addition, Hahn allowed fast-track approval of the experimental mRNA COVID injections illegally, because there were already other successful therapeutics in the market to treat COVID.

Hahn also ignored an ADMINISTRATIVE STAY OF ACTION that was filed with the Department of Health and Human Services and Food and Drug Administration (FDA) to stop emergency use authorization of the COVID injections, because the trials used the faulty PCR tests to determine the presence of COVID in evaluating the “effectiveness” of these new experimental injections. See:

His failure to act upon this “Stay of Action” makes him criminally liable for all of these deaths resulting from the COVID experimental mRNA injections. For more evidence against Stephen Hahn, see: 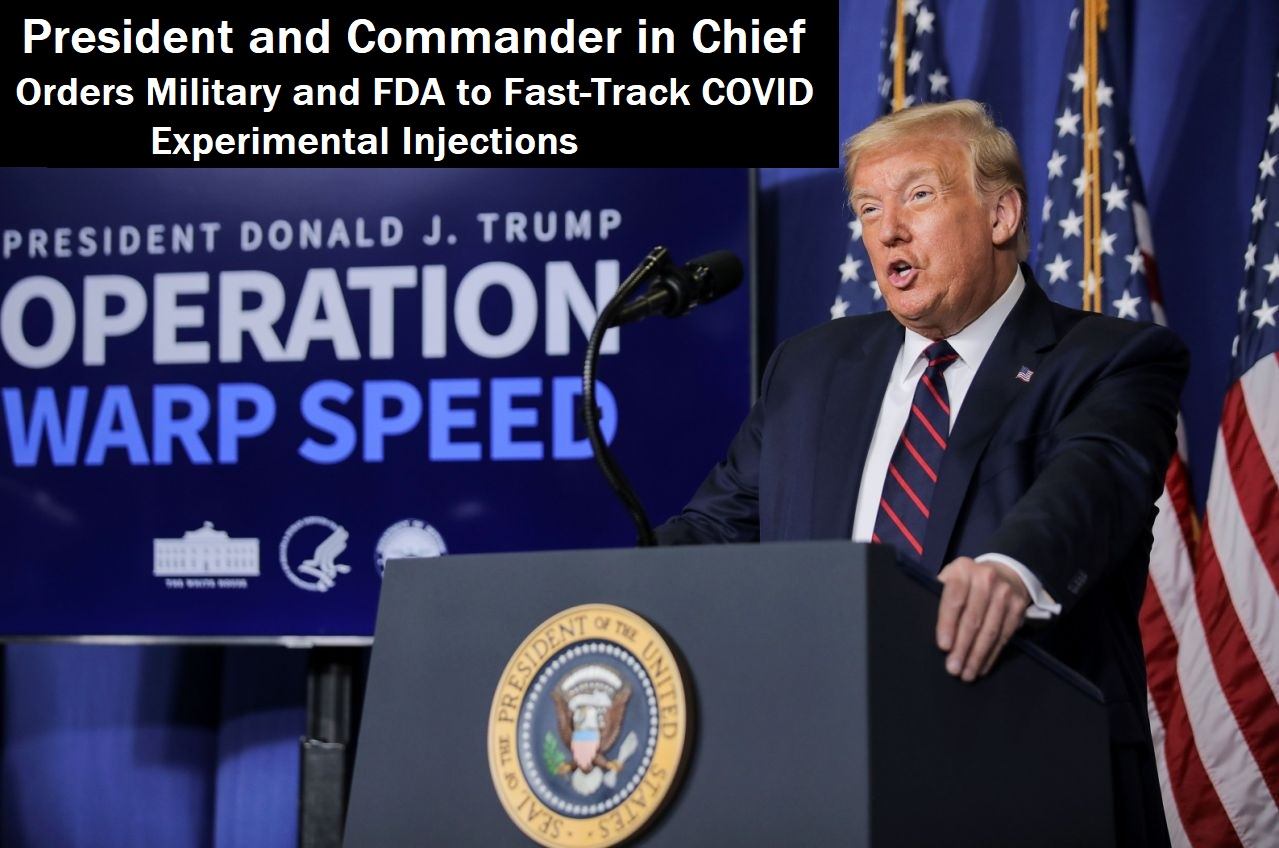 I don’t know if Donald Trump is the current or only former President of the United States (depends who you ask), but one thing nobody can disagree about is that President Trump initiated “Operation Warp Speed” which resulted in the theft of America’s wealth and transfer over to Big Pharma, for several TRILLION dollars, to develop experimental mRNA COVID vaccines.

He ordered the military to participate in their distribution, and he pressured the FDA to issue emergency use authorization, threatening to fire the FDA director for not issuing the EUA quicker.

Up until his last day of this first term, he bragged about how these “vaccines” were brought to market in record time, whereas the normal FDA approval process takes 5-10 years.

These experimental COVID mRNA injections would not be in the market today killing people, if it were not for President Trump leading the way to their approval.

Donald J. Trump should be arrested and charged with mass-murder. For more evidence against President Trump, see:

Trump to do Full 5-Day Course of Remdesivir – Betrayal of Hydroxychloroquine Doctors?

Is Trump the Most Pro-Pharma President in History? QAnons Continue to Lose Credibility

If these three are indicted by a Grand Jury, brought to trial in front of a jury of their “peers”, and then convicted as “guilty,” they should be publicly hanged on a gallows for all to see, and Joe Biden and his administration and health officials should be warned that they are next, unless they stop these injections IMMEDIATELY.

To do this, of course, we will need the restoration or formation of militia groups as provided by the Constitution, and they will probably have to convene Grand Juries to bring charges against corrupt judges first, to remove them from the bench so honest judges can be appointed, or elected, so law and order can be restored to the Court Houses.

Constitutional Sheriffs can also be utilized (many of their deputies serve as bailiffs in the court rooms,) as these crimes have been committed in probably every county in the U.S. where people have been injured or killed by these injections, and most every county is going to have dishonest, corrupt judges who need to be brought to justice and removed from the bench.

Because otherwise there is little hope for any political solution. We the People need to start exercising our Constitutional rights, and take our country back from the Globalist pedophiles who now run the show.

181 Dead in the U.S. During 2 Week Period From Experimental COVID Injections – How Long Will We Continue to Allow Mass Murder by Lethal Injection?