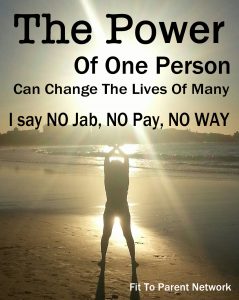 The last few days there has been lots of “bragging” in the media about the success of the No Jab, No Pay Policy… supposedly an extra 5700 children under 5 are now up to date with their vaccines…

2/ Creating segregation in our society

5/ Acceptance of Bullying and name calling

6/ Creating lack of Trust in our Government

8/ Promoting coercion, intimidation and belittling within the medical system

10/ Picking on families with small children and babies

12/ Amplifying the NEED for a new Government and NEW Governing system in Australia.

14/ Showing the number of people that are stupidly/unknowingly supporting the erosion of the Individual Rights of the People.

15/ Raising awareness of the inadequacies within the system and Government

17/ Uniting those that are now isolated, alone and fearful of an inadequate, intimidating Government.

18/ Pointing out the necessity to create positive change and raise awareness and educate the rest of society.

19/ Educating and raising awareness of ALL corruption, fraud and coverup’s by those in “power” and in Government. The opening of “Pandora’s Box”

20/ “Waking me up” and giving me the power, drive and passion to unite, raise awareness and educate people…. Myself, like many have now found their mission and we aren’t going to go away!

21/ making it very clear to many Australian’s that our spineless government & main stream media are in bed with multinational drug corporations which has reshaped the way many people see the Government & media.

As you can see NJNP has been successful – very, very, very successful… ARE YOU GOING TO PUT UP WITH THIS? Or are you going to do something about it??

For those that would like to unite with likeminded people in your local area please PM me for details.

Join the AVN and check out http://www.freedomofchoice.org.au

2 thoughts on “21 Reasons Why The Draconian No Jab, No Pay Policy Has Been Successful”