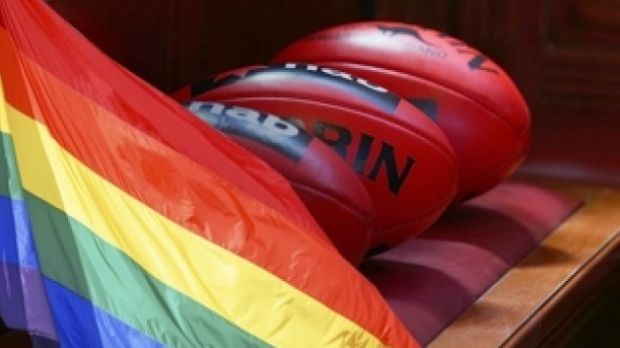 Admittedly a more catchy title would have been something like ‘The GayFL and GayGE Doing Their Thing’. The Melbourne Age is the state’s most left-wing and pro-homosexual newspaper, but surprisingly I could not seem to find covered there a very recent story on the AFL and homosexuality.

However the somewhat more conservative Herald Sun has just run with this story. I refer to the League’s first homosexual pride round, which will occur August 13 at Etihad Stadium, and some leaflets that have been distributed in football ground car parks protesting it. The upcoming game will be between St. Kilda and Sydney.

A bit of an Internet search did however reveal the Age has indeed been happy to write these things up in the recent past. For example, I found an April 30 story about a similar happening. But let me deal with today’s article first. The HS article begins:

Homophobic flyers have been left on car windscreens at AFL grounds after St Kilda revealed it would host the league’s first Pride game against Sydney this month. Victorian Gender and Sexuality Commissioner Rowena Allen described the flyers as “ugly”, but declared it would not overshadow an “awesome day” at the footy on August 13 as she urged the community to get behind the initiative.

In an interview with the Herald Sun after one year in the job, Ms Allen admitted she was “nervous” about the game.

“I’ve never felt safe at the football, so this is the first time that I’m taking my eight-year-old,” she said. “There are so many rainbow families that are coming to the football for the first time. We’ve got one chance to get it right, and Etihad Stadium and the police will do everything they can. But homophobia is real.”

St Kilda chief executive Matt Finnis said the game would be a “proud and important day” for the AFL.

And this is journalism? The mainstream media has simply become the propaganda arm for the militant homosexual lobby. The overwhelming majority of the population who are not homosexual or may oppose the agenda are simply ignored and treated as non-persons.

The older Age article I found did list the contents of a flyer passed around then. I don’t know if this is the same as the one criticised as being “ugly” in the HS piece. But if it is, there is absolutely nothing ugly about it. It is totally accurate and loving and sound.

A few other things can be pointed out in the Age article. First, at least the piece did include a small bit of commentary from the other side:

Attempts to reach the leaflet’s author were unsuccessful. While the flyers referenced the Australian Marriage Forum, president David van Gend said it was not involved, although he sympathised with the views. “I guess people express their concerns in whatever way they can about the injustice to future children inherent in any institution of genderless ‘marriage’. That, after all, is the heart of the matter,” Mr van Gend said.

Second, I am still trying to find out exactly how many AFL players are homosexual. All that the Age piece could tell us is some country league player is! It says: “Saints chief executive Matt Finnis lobbied the league for the Pride match in a bid to stamp out homophobia and celebrate diversity in sport. He was inspired by country footballer Jason Ball – the first gay player at any level of the game to come out – who has held a Pride Cup at his Yarra Glen club for the past three years.”

What?! So here we have an entire round devoted to homosexuality and the AFL, and they can only offer one – just one – player, and he is not even in the AFL? This is madness. How many Christian AFL players are there? Do they get a special round as well?

Indeed, I first wrote about the homosexualisation of the AFL last year and raised some of these questions: billmuehlenberg.com/2015/03/05/the-appalling-gayfl-social-engineers/

As I said in that piece:

But I wonder if much bigger and far more representative groups are worthy of such diversity and celebration. Two thirds of all Australians claim to be Christian. Now that is a sizeable group. Yet for some strange reason I am not aware of this group getting any special treatment by the AFL.

Why can’t they have a special day? Bibles could be passed out free of charge – I am sure the NAB would be happy to subsidise this. And prayers could be said at the beginning of each quarter. Surely the AFL would have no problem with that, right?

And hey, some of these Christians are also theologians. In the name of making everyone feel warm and accepted, will there be a theology round as well? Maybe abridged versions of Calvin’s Institutes could be made available for a weekend of theology football. A ‘theology pride’ round does have a nice ring to it.

After all, these guys keep telling us that “diversity and inclusion is essential to our game” and that they “want everyone to be themselves”. So when is the Christian round coming up AFL? Why aren’t you eagerly and proudly pushing for this NAB?

Or is it in fact so much utter baloney when you speak of diversity and inclusion? Is it really just a complete load of codswallop, and instead you have just succumbed to the demands of the militant homosexual lobby? Perhaps your number one priority is not a lousy game of football, but something far more important, like political correctness and radical social change.

So here we have one massive sporting group – the AFL – with not one identified homosexual, yet it still insists we must have an entire round devoted to such non-existent players. That is one round out of 23. So to be representative, that should mean over four per cent of all AFL players are homosexual.

Not only is that higher than the national average (which has always been around 1½ per cent), but we still are not aware of even one of them in the league. With 18 AFL teams, each with some 40 (?) active players listed, we are talking some 720 players.

It is about indoctrinating the entire nation into embracing this activist agenda and lifestyle. Most people going to an AFL match just want to have a few hours of enjoyment with the game. They do not want the politically correct and politically-motivated AFL pushing every lousy agenda around.

Shame on the AFL. I encourage every one of you to complain to the AFL about this. www.afl.com.au/contact