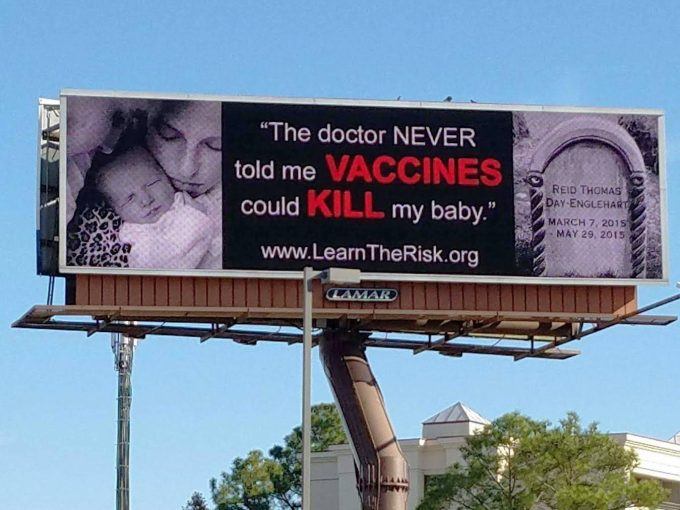 In an effort to remind parents that vaccines can kill their baby, a billboard has been placed in Baton Rouge, Louisiana, on interstate I-10 at College Drive, to honor Baby Reid Englehart and all of the other children taken from these toxic injections.

Baby Reid died at the age of two months old, only nine days after the doctor said it was safe to vaccinate him with eight vaccine doses, while he was sick. The vaccines were never investigated before his death was ruled as being caused by some unproven reason, rather than the vaccines that overstimulated his immune system.

Reid’s parents cannot directly sue those responsible for his death. The manufactures of those eight vaccine doses are protected from liability, afforded to them since 1986 through the National Childhood Vaccine Injury Act. [1]

There is no amount of compensation a parent can receive to replace their child that died from vaccines the doctor insisted were safe. And there is no recourse for those killed from vaccines. [2]

Since Reid’s original story was published through VacTruth, many other parents have come forward admitting the same thing happened to their child and the vaccines were not even mentioned on their babies’ autopsy reports. [3]

When doctors are collecting money from the insurance companies, for each vaccine administered to these babies they helped kill, the parents are left begging for help, to pay for funeral costs and a headstone. [4]

This treatment is one main reason why parents will no longer vaccinate their children. The financial burden from a vaccine injury is much more costly than getting any of these mild childhood diseases naturally.

Parents of children who died from a vaccine injury are demanding accountability. These deaths will not be covered up. The Back To Sleep Campaign distracts the public form the truth that vaccines are behind many of these sudden infant deaths.

Reid’s mother, Christy Day, wants all parents to research vaccines as much as they would research their child’s food, carseat, highchair or stroller. It only makes sense a parent should research what is directly getting injected into their baby.

Christy grieves daily over the loss of her son and has experienced how families are treated to cover up these vaccine-related infant deaths. She wishes she could turn back the clock and would have never allowed her children be part of this vaccine experiment. She will continue to share her story to raise awareness, so other babies get to live.

Brandy Vaughan, founder of LearnTheRisk.org, has worked tirelessly to raise money to fund this billboard. She is an ex-pharmaceutical representative who witnessed corruption from the inside and hence founded LearnTheRisk.org, because parents are not being given necessary information to make an informed decision.

Learn The Risk made history by launching one of the most POWERFUL billboards the vaccine truth movement has ever seen — a billboard honoring baby Reid Englehart, who lost his life to vaccines, in his hometown of Baton Rouge, Louisiana.

I want to send a huge heartfelt thank you to all who donated, to help make baby Reid’s billboard a reality — it was a dream come true for his mother.

In Reid’s honor, we also launched a Sudden Infant Death info page on the website. Learn more about SIDS here.

Further donations will help keep this board up and running and bring it to other areas in the US, so more parents understand the REAL risks of vaccines and save other children from the same fate.PLEASE DONATE TODAY TO HELP KEEP THIS BOARD UP! [5]

By sharing Reid’s story, we can help save other children from the same fate.

Augustina Ursino has spent many years researching vaccine ingredients and vaccine reactions. Once she became aware of so many children and adults dying after vaccinations and that most people that survived them are living with vaccine injuries, this impelled her to write these stories. She earned a BS in Marine Biology, focusing on conservation biology and realized it didn’t make sense to inject life forms with the ingredients used in vaccines, under the guise of keeping us healthy. Augustina now writes for VacTruth, where this article first appeared, and continues to help families negatively affected from vaccines.