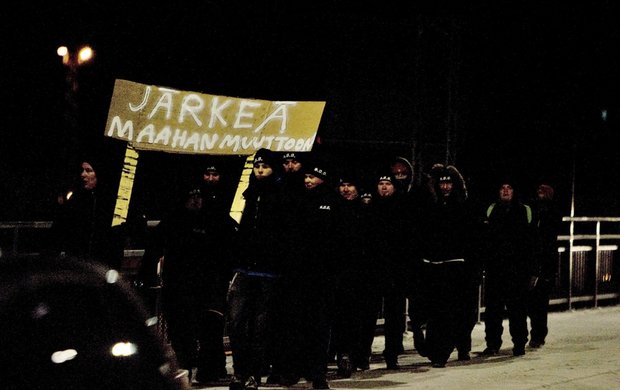 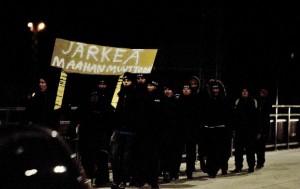 HELSINKI (AP) — In the snowy streets of Finland’s cities, black-clad vigilantes are on patrol, to the alarm of the police and many residents. They say they’re there to keep Finnish people safe from what they say is a new and clear threat — the increasing numbers of asylum-seekers.

A group that calls themselves the Soldiers of Odin demonstrate in Joensuu, Eastern Finland. The rise of the Soldiers of Odin, which claims 500 members, has sparked both concern and ridicule in the Nordic country. They derive their name from a Norse god, and insist their patrols are needed to protect the peace in the sparsely populated nation of 5.5 million, which wasn’t a major destination for migrants until 32,500 people applied for asylum last year. (Minna Raitavuo/Lehtikuva via AP) FINLAND OUT

The rise of the Soldiers of Odin, which claims 500 members, has sparked both concern and ridicule in the Nordic country. Opponents dressed as clowns recently to accompany the ominous-looking men on their patrols.

But the Soldiers of Odin, who derive their name from a Norse god, insist their patrols are needed to protect the peace in the sparsely populated nation of 5.5 million, which wasn’t a major destination for migrants until 32,500 people applied for asylum last year. Most came from Iraq but also from Afghanistan, Somalia and Syria.

“It’s chaotic and getting out of hand,” Mika Ranta, a 29-year-old truck driver who founded the group, told The Associated Press. “We should be more careful about who we let into the country.” The Soldiers of Odin say they are unarmed, though Ranta acknowledged he carries pepper spray, which is legal in Finland. They wear black jackets bearing their logo on the back — a mustachioed man wearing a Viking helmet and Finnish flag as a neckerchief.

Speaking by phone from the northern city of Kemi, Ranta said the posse isn’t racist, but considers the newcomers a threat because “they are Muslims.” “Islam has never adapted anywhere and only brings problems with it. They don’t tolerate anyone else apart from believers in Islam,” Ranta said.

He said police are overworked and need help to deal with the migration situation — a claim rejected by Finland’s top police official. National Police Commissioner Seppo Kolehmainen said the tenfold increase in asylum requests in 2015 has greatly increased the workload for police officers, including the need to fingerprint applicants, keep order at reception centers and protect them from arson attacks, mostly by drunk Finnish men — not always successfully.

“But we categorically don’t accept any street patrols that have been set up solely against immigrants or asylum-seekers. It’s the duty of the police to keep law and order,” he added. Formed in October when the flow of migrants peaked, the Soldiers of Odin raised their profile on social media following reports that Finnish women were harassed on New Year’s Eve in incidents that resembled a string of attacks in Cologne, Germany, that were blamed largely on foreigners.

Police are investigating 15 reported cases of sexual assault, including rape, attempted rape and groping in downtown Helsinki during New Year’s celebrations, with many of the suspected perpetrators having foreign backgrounds, including some asylum-seekers.

So far, the Soldiers’ patrols have been uneventful — they haven’t had any encounters either with asylum-seekers or with the police. But they have created debates on social media, radio and TV shows and worried officials. They have also sparked counter-movements.

Last week, a group calling itself the Sisters of Kyllikki, named after a mythological Finnish female figure, began street patrols of their own “to spread love and caring” in the southeastern town of Joensuu, where a week earlier the Soldiers of Odin held an anti-immigrant demonstration.

That group’s fame has spread on Facebook, with patrols planned in at least four other towns. A troupe of clowns calling themselves the LOLdiers of Odin, in apparent reference to the text messaging abbreviation, LOL, for “laughing out loud,” has gone even further.

Dressed in crazy clothes, including Viking helmets, tin hats, and long flowing gowns, they taunted and mocked the vigilantes on one of their patrols last week in the southern city of Tampere. The clowns sang children’s songs, threw cartwheels and slid down piles of snow along the black-clad men’s route.

Ranta said one of the clowns poured water on a patrol member when the temperature outside was as low as minus 25 degrees Celsius (minus 14 Fahrenheit). “They just tried to provoke us,” he said. “If they poured water down my back I’d throw pepper spray in their face.”

Unlike the clowns, some take the vigilantes seriously, including Prosecutor General Matti Nissinen, who described them as sending “a racist and threatening” message. “If we go back in history, we see that nothing good has ever come out of street patrols by this kind of uniformed group,” Nissinen said.

The patrols have also caused consternation at government level. While Prime Minister Juha Sipila initially appeared to dither about taking a stand, Finance Minister Alexander Stubb quickly condemned the groups, saying the government would seek ways to ban them. Foreign Minister Timo Soini, who leads the anti-immigration Finns party, said he condemns racism but didn’t take a clear stand on the patrols.

Ranta’s group claims offshoots in Britain, Germany, the U.S. and Estonia as well as neighboring Sweden and Norway. It hasn’t got a foothold in the Helsinki region, where people are used to foreigners and are generally welcoming toward them.

“We’re not there yet, but it’s just a question of time,” Ranta says. “Those New Year attacks are a clear sign we are needed.”

2 thoughts on “Anti-immigrant vigilante patrols cause concern in Finland”