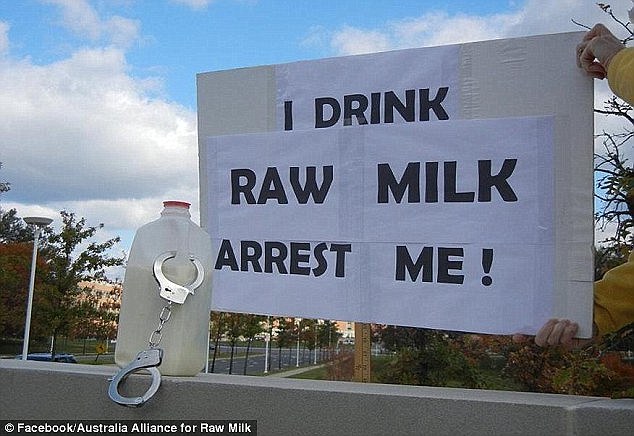 “There’s a lot of ignorance. People don’t understand the facts about raw milk and how it can be done well,” raw milk dairy farmer Mark Tyler said.

Selling raw milk is currently illegal in Australia, but farmers can drink their own milk.

“I was just eating my Vitabrits one morning and just thought, ‘How come I can drink this milk and other people can’t?'” Mr Tyler said.

Consumers were demanding the product, so Mr Tyler came up with a plan where, instead of buying the milk, customers bought a share in the cow.

The Tyler family, who farm at Willunga Hill, about an hour out of Adelaide, now supply the niche product to about 700 investors in South Australia.

Raw milk is a premium product and sells for at least three times the farm-gate milk price.

“We’re just providing an alternative rather than dairy farmers being locked in as slaves for the big corporations,” Mr Tyler said.

Working within the legislation has not been easy,with authorities charging Mr Tyler for selling raw milk illegally.

After an appeal to the Supreme Court a mistrial was declared, and a new trial will begin later this year.

“A farmer has a choice if we can get this legalised and simplify the whole procedure so that it is something people can do and do well,” Mr Tyler said.

“In 15 years of testing, we’ve never had a pathogen in our milk,” Mr Tyler said.

A Victorian child died in 2014 after drinking raw milk marketed as bath milk, and in that state a bittering agent is now added to discourage consumption.

“In our opinion, the risks of allowing the wholesale sale of raw milk onto the market presents too high a public health risk,” FSANZ chief executive Steve McCutcheon said.

A 2014 review saw the relaxation of rules around the sale of raw milk cheeses, and selling raw goat’s milk is allowed due to what the regulator believes is safer production processes.

Raw milk legitimised in UK when stocked by Selfridges

Australia, Scotland and Canada are the only countries where selling raw cow’s milk is illegal.

In the rest of the United Kingdom raw milk producers can sell directly to consumers, but not through a third party like a supermarket.

Steve Hook is the face of the raw milk movement in the United Kingdom and is one of around 100 raw milk dairy farmers.

He starred in documentary The Moo Man, which premiered at the Sundance Film Festival in 2013, and said selling raw milk saved the family farm.

“With 75 cows we’re half the national average size and we employ 25 people, whereas in the UK there’s usually one person per 150 cows,” he said.

“We put a vending machine in the store and I rented a bit of floor space in the food hall. The pasteurising industry went nuts,” he said.

“They put massive heat on the food standards agency to get the machine out of there.”

Dairy consultant says it is time for rules to change

Ron Hull, a former CSIRO microbiologist and now dairy consultant, said pasteurisation had served Australia’s export-focused dairy industry well, but that it was now time to change the rules.

“Now the industry is deregulated there is much more competition on world markets,” Dr Hull said.

“There’s now a real need for farmers to run their own micro-dairies and sell raw drinking milk and raw cheeses.”

Raw milk producers set up a cooperative this year and will push political parties for legal changes.

Despite the economics of raw-milk farming, while the health impacts remain controversial it seems unlikely regulatory changes will be forthcoming.