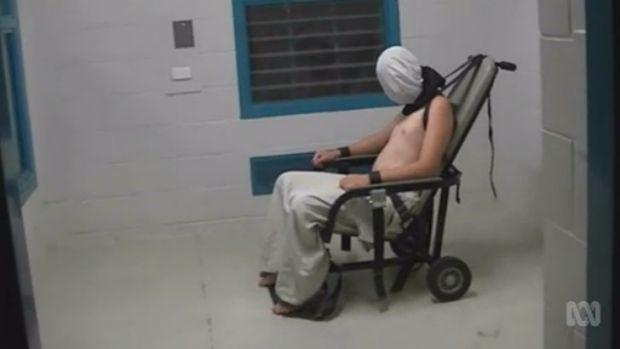 It almost defies belief but right here in Australia there is a prison system that locks up 10 year olds and places children as young as thirteen in solitary confinement.

“This is barbarism, this is inhumane, this is child abuse.”Lawyer

Children have been confined to an isolation wing with no access to sunlight or running water.

“Those cells were ghoulish, they were something medieval.”Lawyer

Some held for weeks on end, deprived of basic necessities.

“We all sort of looked at each other in shock… there were signs of life in there but we didn’t know who was in there or what was happening, or how long they’d been there.” Lawyer

“What’s going on with children in detention here is a deliberate, punitive, cruel policy.” Lawyer

On Monday night Four Corners reveals the shocking truth about the treatment of children behind bars, where young offenders have been stripped naked, assaulted and tear gassed.

“They had absolutely nowhere to run…Those children were afraid for their lives.” Children’s Advocate

Held by a system that seems bent on breaking children instead of reforming them.

“If I treated my children like that, the authorities would take my children from me quite properly because I would be behaving cruelly to them.” Lawyer

This confronting investigation with send shockwaves around Australia.

Australia’s Shame, reported by Caro Meldrum-Hanna and presented by Sarah Ferguson, goes to air on Monday 25th July at 8.30pm. It is replayed on Tuesday 26th July at 10.00am and Wednesday 27th at 11pm. It can also be seen on ABC News 24 on Saturday at 8.00pm AEST, ABC iview and at abc.net.au/4corners.

One thought on “AUSTRALIA’S SHAME”