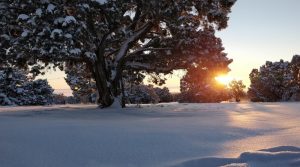 By William Tyler Olcott
From Sun Lore of All Ages [1914]

BECAUSE of the importance of Sun worship, and its widespread influence upon the primitive inhabitants of the world, there were instituted in honour of the solar deity, in many lands, great festivals and elaborate ceremonials, the traces of which have come down to us in modified form even to this day. Our most important ecclesiastical feast days in fact are but survivals of ancient solar festivals.

Twice in the year the sun apparently changes its course. In midwinter, having reached the lowest point in its path, it turns about and begins to mount the skies; in midsummer, conversely, having attained the highest point it reaches, the sun seems to turn about once more, and descend the steeps of the firmament. These two epochs, the winter and summer solstices as they are called, that mark the sun’s annual course, were regarded as supremely important by the ancients and gave rise to great national festivals that were celebrated with pomp and ceremony throughout the ancient world.

At the feast of the winter solstice men testified their gladness at witnessing the return of the all-powerful sun. To the inhabitants of Greenland it meant the early return of the hunting season, and all nations regarded it as a sign that springtime and harvests were on the way, and the dormant life of the winter season was on the wane.

In many countries this festival season was known as “Yole,” or “Yuul,” from the word Hiaul, or Huul, which even to this day signifies “the sun” in some languages. From this we get our word “wheel,” and the wheel is one of the ancient symbols of the sun, the spokes representing the sun’s rays. As we shall see later this symbol was a prominent feature in one of the great solar festivals.

Procopius describes how the men of Thule climbed the mountain tops at the winter solstice, to catch sight of the nearing sun after their thirty-five days of night. Then they celebrated their holiest feasts.

Plutarch, referring to the solar festivals of Egypt, says, that “about the winter solstice they lead the sacred cow seven times in procession around the temple, calling this the searching after Osiris, that season of the year standing most in need of the sun’s warmth.”

In our own time a number of Christian religious observances and festivals are of distinct solar origin. Notable among these feast days is Christmas. “The Roman winter solstice,” says Tylor, “as celebrated on December 25th (VIII Kal. Jan.) in connection with the worship of the Sun-God Mithra appears to have been instituted in this special form by Aurelian about A. D. 273, and to this festival the day owes its apposite name of ‘Birthday of the Unconquered Sun.’ With full symbolic appropriateness, though not with historical justification, the day was adopted in the western church where it appears to have been generally introduced by the fourth century, and whence in time it passed to the eastern church as the solemn anniversary of the Birth of Christ, Christmas Day. As a matter of history no valid or even consistent early Christian tradition vouches for it.”

Many of the early dignitaries of the Church reveal in their writings the solar character of this festival. Augustus and Gregory discoursed on “the glowing light and dwindling darkness that follow the nativity,” and Leo the Great denounced in a sermon the idea that Christmas Day is to be honoured, not for the birth of Christ, but for the rising of the new sun.

The solar origin of the great feast is attested in Europe by bonfires, and the burning of the Yule log, and in the Christmas service chant, “Sol novus oritur.”

Even the sacrifices offered to the Sun in pagan times at the great solar festivals find their survival in the sacrifices of a lamb which we offer at Eastertide, and an ox at Christmas. The lighting of the Christmas tree is but the light to guide the Sun-God back to life, and the festival cakes of corn and fruit, made in honour of the Sun in ancient times, and laid on the sacred altars of the Persians as an offering of gratitude to the Lord of Light and Life, find their prototype in the plum pudding that graces the board at our Christmas feasts of rejoicing. Christmas is, therefore, nothing but an old heathen celebration of the winter solstice, the feast of rejoicing that a turning point in the sun’s course has been reached, and that the life-giving orb has attained the end of its journey of dwindling hours of daylight, and has started back on a course that brings with it each day an increase of warmth and light.