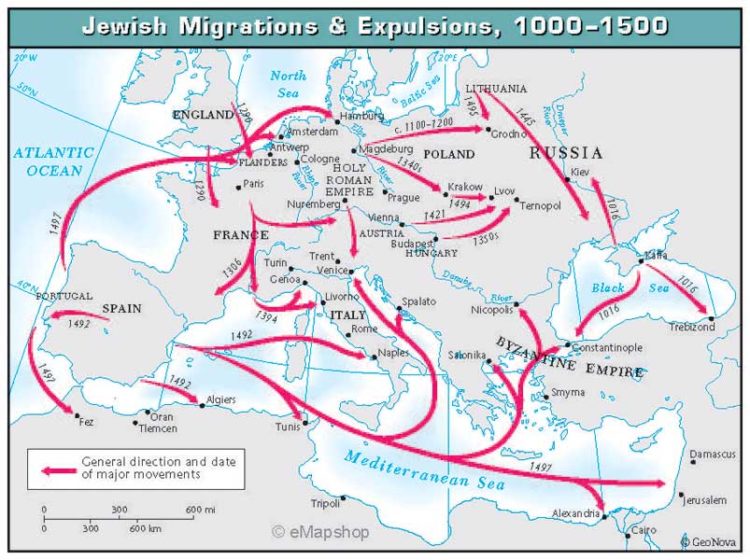 Jews are a mixed race, but all Jews, Ashkenazi or Sephardic, have very significant commonalities with each other and with other Middle Eastern Semites such as Arabs.

ONE OF THE RESEARCHERS involved in this study of genetic similarity between Jews and Arabs, Dr. Mark Jobling, denies that the study could have political implications, but he considers that question in terms of whether genetic similarity could bring peace between Arabs and Jews. There is another aspect, the bearing that genetic dissimilarity has on relations between Jews and White people. The sociobiological implication is obvious — i.e., as Kevin MacDonald says, that the Jews are a genetically alien population with interests inimical to those of the White majority — and, if sociobiology were given the consideration in our politics that it deserves, this would result in a movement to curtail Jewish influence in Western societies.

Neither Jews nor Arabs (apart from some of the population of the Arabian Peninsula, the true Arabs) are a pure Semitic people. Both have significant Negro admixture, as is evident for example in the Negro-wool seen on the heads of many Jews like Alan Dershowitz.

No doubt the Jews and Arabs, being genetically related, also share some psychological characteristics, for example, as I see it, a certain unreasonableness and inclination to support with great stubbornness some representations of reality that are demonstrably false but socially useful for them. The Jew and the Arab, compared to Europids, are more attuned to “social truth” than to the world as it is, and their genetic kinship would partially explain that.

This finding of course directly contradicts the theory put forth by Jew Arthur Koestler (The Thirteenth Tribe) that Ashkenazi Jews are not genetic Jews but converts from the Khazar people, a theory cherished by some Christians who want to excuse the “real Jews” (Sephardim) from blame for the Bolshevik Revolution etc., overlooking that Sephardic Jews, while generally not as rabid and obviously deleterious (and inbred) as “Russian Jews,” have also done bad things in the West. There have been slave-traders like Aaron Lopez, opium magnate David Sassoon, Spain’s Grand Inquisitor Miguel de Torquemada, and many other nefarious examples.

The important point is that the Jews are an alien genetic population and not, as they began to pretend during the reign of Napoleon, people just like us who merely practice a different religion.

Jews and Arabs are ‘Genetic Brothers’

They may have their differences but Jews and Arabs share a common genetic heritage that stretches back thousands of years.

The striking similarities in their biology have just been revealed in a study of over 1,300 men in almost 30 countries worldwide.

Scientists compared the men’s Y chromosomes, the tiny structures within cells that carry the genetic instructions that tell a developing foetus to become a boy.

The comparison also showed that Jews have successfully resisted having their gene pool diluted, despite having lived among non-Jews for thousands of years in what is commonly known as the Diaspora — the time since 556 BC when Jews migrated out of Palestine.

Throughout human history, alterations have occurred in the sequence of chemical bases that make up the DNA in the Y chromosome, leaving variations that can be pinpointed with modern genetic techniques.

Related populations carry the same specific variations. In this way, scientists can track descendants of large populations and determine their common ancestors.

The study, published in the Proceedings of the National Academy of Sciences, found that Jewish men shared a common set of genetic signatures with non-Jews from the Middle East, including Palestinians, Syrians, and Lebanese.

These signatures were significantly different from non-Jewish men outside of the Middle East. This means Jews and Arabs have more in common with each other, genetically speaking, than they do with any of the wider communities in which they might live.

Dr Mark Jobling of Leicester University, UK, one of the authors of the new study, told the BBC: “The kind of DNA we have used to analyse this question is the human Y chromosome. This represents only 2% of our genetic material and it is passed down from father to son.

“This makes it particularly interesting to use in a study of Jewish populations because Jewishness is passed down from the mother to children — it is maternally inherited. So using a paternally inherited piece of DNA gives us a good opportunity to see the signal of mixture with other populations if this has occurred.

“The fact that we don’t see it suggests that after the Diaspora these populations really have managed to maintain their Jewish heritage.”

Dr Jobling dismissed the idea that the study could have any political implications. “It seems that in many of these situations where groups are in conflict with each other they are likely to be pretty much genetically indistinguishable, and this factor, to the peoples involved in these conflicts, clearly isn’t the point and isn’t likely to change their behaviour very much.”