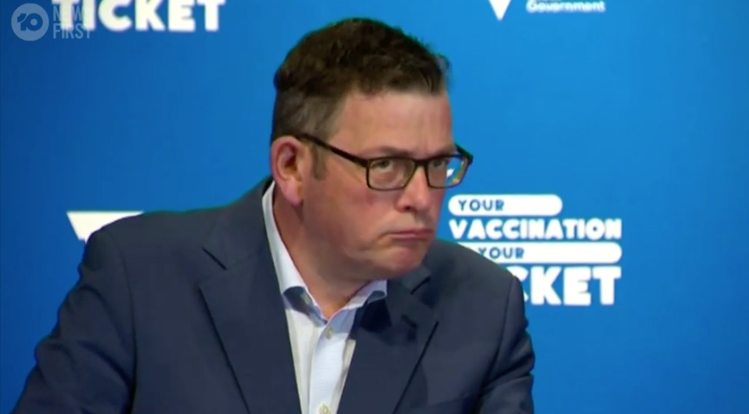 This Filthy Cockroach Belongs Behind Bars

“On this, we can agree with Premier Andrews. This is, indeed, what happens to a country that completely loses its moral compass.”

Victorian Premier Daniel Andrews is perhaps Australia’s most zealous political advocate for the arbitrary segregation of society through the use of ‘internal passports’.

In September, the Premier said the state would move from a “lockdown” to a “lockout,” promising the unvaccinated would not be afforded the freedoms of those who have been double-soon to be triple-vaccinated.

This week, Andrews delivered on his promise, removing “most of the remaining restrictions in Victoria,” but only for those who are currently deemed “fully” vaccinated.

According to reports, the unvaxxed could be locked out until 2023, with Andrews warning the unvaccinated will be barred from extra freedoms “for the entirety of 2022.”

“Whether it’s a bookshop, a shoe shop, a pub, café, a restaurant, the MCG, the list goes on and on,” Andrews said last month.

In effect, Andrews has split the population in two, with one portion enjoying freedoms and “privileges” denied to others. Ironically, this is exactly the sort of thing he lamented only five years ago.

In a recently resurfaced Facebook post from March 2016, the Premier lamented South Africa’s use of “extremely detailed ID cards,” describing them as a “grotesque kind of ‘internal passport’ that kept the population split in two.

56 years ago today, a group of South Africans gathered in the township of Sharpeville to protest a law which required black residents to carry an extremely detailed ID card at all times – a grotesque kind of ‘internal passport’ that kept the population split in two.

Eventually, the police turned up to this demonstration and opened fire on the unarmed crowd, shooting people in the back as they fled.

Over the next few months, the South African government then rounded up 18,000 activists and detained them without charge.

This is what happened to a country that completely loses its moral compass.

But South Africa’s story can teach us another lesson too, of what can happen when hope prevails.

A few years after the apartheid regime fell, President Nelson Mandela returned to that very spot in Sharpeville to sign his country’s new, fair, and equal constitution into law.

The world now knows March 21 as the Internal Day for Elimination of Racial Discrimination.

In Australia, we know it as Harmony Day. We’re proud to observe it. Diversity is our greatest asset.

Are there any boxes here Premier Andrews doesn’t check? Victoria Police may have been firing “less-lethal” ammunition on the state’s present Untermensch, but surely the Premier is objecting to more than the type of bullet the South African authorities were using.

On this, we can agree with Premier Andrews. This is, indeed, what happens to a country that completely loses its moral compass.