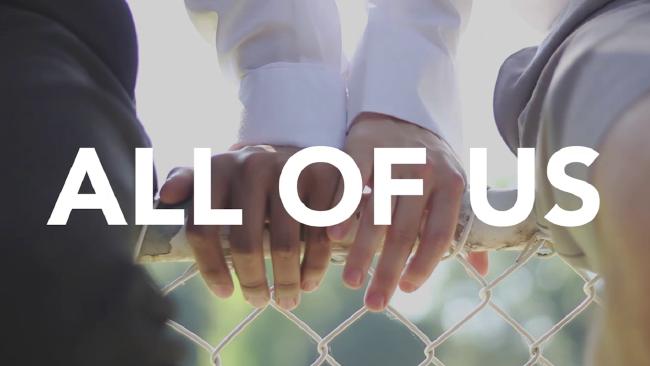 Part of the resource material associated with a manual distributed by a gay lobby group to schools.

Eleven-year-old children are being taught about sexual orientation and transgender issues at school in a taxpayer-funded program written by gay activists.

The Safe Schools Coalition teaching manual says that asking parents if their baby is a boy or a girl reinforces a “heteronormative world view’’.

Religious groups yesterday criticised the “age-inappropriate’’ manual, which suggests that sexuality be raised in every subject area. “Whatever the subject, try to work out ways to integrate gender diversity and sexual diversity across your curriculum,’’ the manual says.

The All of Us teaching manual, designed for Years 7 and 8, says that children often realise they are lesbian, gay or bisexual between the ages of 11 and 14, while the ­average age for “coming out’’ is 16

A lesson plan on “bisexual ­experiences’’ requires students to imagine they live in a world “where having teeth is considered really unpleasant’’. Students take turns telling a classmate about their weekend, without showing their teeth.

“How did it feel to have to hide part of yourself?’’ the students are asked. “Do you think that some lesbian, gay or bisexual young people feel that they need to hide part of themselves? How might this make them feel?’’

The children have to answer 10 questions, including whether they could “easily talk to your parents about your sexuality”, and to name four famous Australians of the same sexuality.

The teacher then instructs the children to stand, and slowly counts backwards from 10. Each child can sit down when the number called out by the teacher corresponds with the number of times they answered “yes’’ in the quiz — meaning that a student who answers “no’’ could be left standing in front of the class.

The Safe Schools manual ­appears to reach beyond promoting tolerance, to advocating activism by students. It tells students to defy teachers who refuse to let them put up LGBTI posters.

“If you can, it’s a good idea to get permission to put your posters up, so you avoid getting in ­trouble,’’ the manual says. “If your school or teachers say no, ask for reasons and see if they make sense. If they don’t seem reasonable, you may have to be creative about where you place them.’’

Safe Schools also advises ­students to “use your assignments to start conversations’’.

“For example, some students have chosen to do their English oral presentations on equal marriage rights or their music or art assignments on how artists express their sexuality, gender or intersex status through their work,’’ it says.

The federal government has provided $8 million in funding for the program, which has won support from the Australian Secondary Principals Association, beyondblue, headspace and the Australian Education Union. The Victorian government will require all state schools to join the Safe Schools network by 2018, but the program is voluntary in other states and territories.

So far 490 primary and high schools nationally have signed up, although the list of 24 schools in Queensland is secret.

Federal Education Minister Simon Birmingham said the Safe Schools program was an “opt-in’’ for schools and run at arm’s length from government.

“Homophobia should be no more tolerated than racism, especially in the school environment,’’ Senator Birmingham said. “The resource is intended to support the right of all students, staff and families to feel safe at school.’’

A La Trobe University study of more than 3000 same-sex-attracted young people in 2010 found that 75 per cent had experienced some form of homophobic bullying or abuse — with 80 per cent of those occurring at school.

She said forcing students to imagine themselves in a same-sex relationship was a “form of cultural bullying’’.

Ms Francis said the material was not age-appropriate, as 11-year-old children were too young to be taught about sexual orientation and transgender issues. “A lot of children are still pretty innocent about this stuff — these are adult concepts,’’ she said.

Ms Francis agreed that bullying against LGBTI students “absolutely has to be stopped’’.

“Every child should be safe at school,’’ she said.

Safe Schools Coalition national director Sally Richardson said students at safe and supportive schools did better academically and were less likely to suffer poor mental health. “Our resources are designed to provide teachers with tools to help them have conversations with students around inclusion and diversity in the community,’’ Ms Richardson said. “We provide schools with practical ways to foster a positive school culture where students, staff and families of all sexualities and gender identities feel safe, included and valued.’’

Ms Richardson said all the Safe Schools materials — including the All of Us teaching guide — were used at the discretion of individual schools.

The principal of Scotch College in Adelaide, John Newton, said his students had “embraced’’ the Safe Schools message of support and tolerance.

But he did not approve of the lesson plan that required children to imagine themselves in a same-sex relationship.

“That wouldn’t be a method we’d use,’’ Dr Newton said.

“It feels like a ham-fisted attempt to change a culture.

“Our children are well ahead of the issue and happy to talk about it — they seem to have a very mature approach.’’

Safe Schools is also used in Shenton College, an independent public school in Perth. “We strive to be a welcoming, progressive and inclusive public school,’’ said principal Christopher Hill.

“We can’t turn away from the fact that schools need to deal with these sorts of issues.’’

The Safe Schools guide cites statistics that 10 per cent of people are same-sex attracted, 1.7 per cent are intersex — born with both male and female features — and 4 per cent are transgender.