After coming under fire for being a “threat to free society,” Google is facing even more scrutiny for their extreme, cult-like atmosphere. It turns out new employees are forced to wear multi-colored propeller caps which say “Noogler” on them for an entire week after going to their first “TGIF” all-hands meeting.

The hats have been a part of Google’s corporate culture for years, but became fodder for public amusement after Breitbart leaked shocking footage of a “TGIF” meeting in which Google higher-ups disparaged Trump supporters and encouraged employees to think of ways the company could thwart populist movements in the United States and other countries. The Noogler hats are just one of the many ways in which Google forces its employees to bend to their authoritarian corporate culture — and are a representation of the company’s cult-like nature.

“If you’re new to Google, expect to be called a Noogler. Pronounced ‘new-gler,’ these people are identifiable thanks to the Google-colored propeller caps they receive,” Business Insider explains. Nooglers get their caps at their first TGIF meeting. The excitement at being christened with a Noogler cap strikes a shocking similarity to that of cult members who are eagerly awaiting their formal indoctrination. 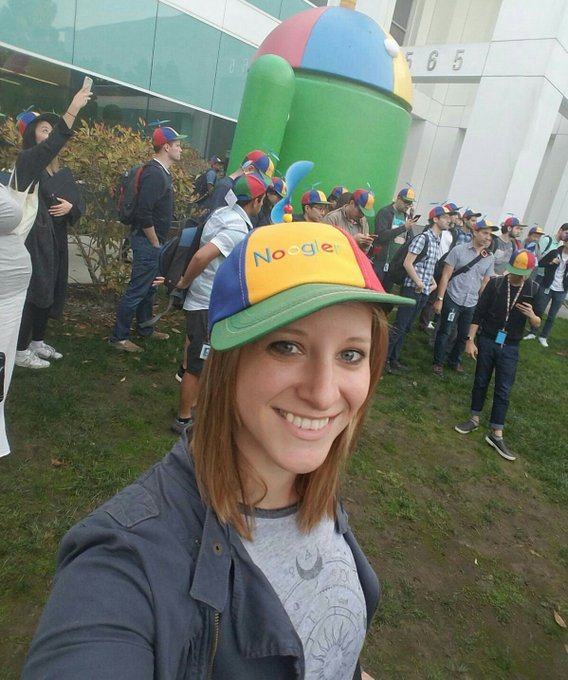 So excited that this day is finally here! #noogler @lifeatgoogle

After the public got to see the Noogler hats for the first time, multiple Twitter users commented that the hats were the epitome of the cultish corporate culture at Google.

“After watching the leaked video and seeing everyone with those hats on I’m convinced #Google is a cult,” declared one user,  while another proclaimed, “It’s cult-like, with all the hugs and so many ‘Googlers Googling’ by wearing those bizarre Google hats,” referencing a part in the video where all of the employees hug each other.

But it’s not just the hats that show how oppressive and cult-like Google really is: Recall the firing of James Damore, a former Google employee who was cut from the company simply for suggesting that the environment at Google was not conducive to diversity of thought. Damore accused the company of creating an ideological echo chamber with zero room for discussion.

At Google, if you don’t conform, you’re kicked out.

More insidious, however, is Google’s tremendous effort at keeping their employees “happy.” It’s not a secret that working at Google comes with a host of perks beyond the average working American’s wildest dreams: Free, organic, chef-prepared meals, free dental and healthcare, free haircuts, free dry cleaning, gyms and swimming pools, nap pods and other amenities make life at Google seem more like a luxury resort than a place of work.

Google says it provides these things to reduce employee turnover, but their generosity may serve a more clandestine purpose: Brainwashing their employees. By providing just about everything they could need, Google employees aren’t just being made happy, they’re being “turned” into Google disciples that will support the company’s endeavours, no matter how controversial — and follow the company’s lead, no matter where it takes them.

Alongside Google’s penchant for information control, it’s clear that Google isn’t the benevolent force it pretends to be.

The hats may say “Noogler” but what they really mean is, “You’re one of us.” And once you’re one of the “team,” there may be no coming back.

2 thoughts on “Google is a CULT: Employees wear multi-colored propeller hats to proclaim obedience to their creepy techno-cult”