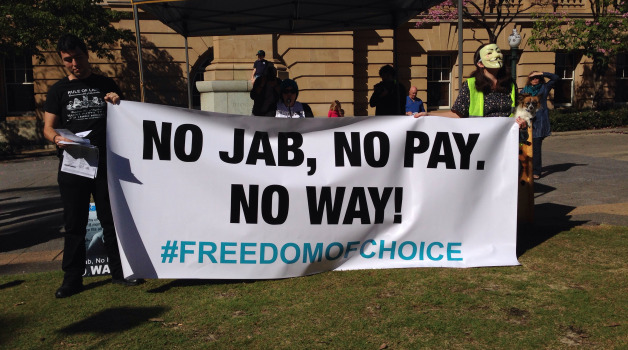 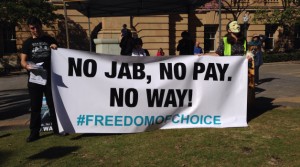 to debate the discriminatory and unscientific propaganda campaign

instigated by The Daily Telegraph and the smear campaign against

parents who have made informed decisions not to vaccinate their

Should Rupert Murdoch, who has pharmaceutical investments, be allowed

to influence government decisions, which affect our children? “

On the 20th of November the third Sydney NO JAB NO

Surry Hills to protest against the horrific, anti-human-rights

campaign against parents who make an informed healthy choice for their

children by not vaccinating them. Pro-choice parents believe that this

agenda has been driven largely by Mr Rupert Murdoch who has

pharmaceutical investments in vaccine companies such as

children cause outbreaks and makes demands that children who are not

vaccinated with state-mandated chemicals (which include mercury,

formaldehyde, aluminum and other toxins) be denied interaction with

other children. There is much scientific evidence questioning the

effectiveness of vaccines. Similar evidence on the vaccine

manufacturers’ own warning labels demonstrate that the vaccinated

population may be responsible for spreading disease. Freedom of Choice

than healthy happy families who exercise freedom to chose healthy and

proven alternatives for themselves and their children.

The policy and its supporters, including The Daily Telegraph, demands

that unvaccinated children be barred from all social contact with

other children thereby isolating them as social outcasts.

Freedoms of Choice organisers are demanding a public debate with

Well informed parents who choose not to vaccinate, have been called

“Baby killers and terrorists”. We are asking for a fair debate on

these absurd allegations. Claire Harvey wrote “Anti-vaxers you are

powerful man who has financial interests in pharmaceutical companies.

The organisers and their followers also demand fairness and equality

in the media, as there is a media blackout on freedom of choice

One must ask the question, is it Mr Rupert Murdoch’s media or the

government that controls our legislation? In another report by Claire

Harvey entitled: “The Sunday Telegraph has scored a massive victory in

Telegraph), we read the following:, “Today The Sunday Telegraph has

campaign”. The paper seems to be run by some with questionable regard

for human rights who are prepared to promote pharmaceutical child

children into anti-social monsters and psychological criminals. This

We protest against the Social Services Amendment Bill 201, we speak up

about our freedom of choice, we desire to highlight the influence the

measure with no definitive scientific basis launched as a community

health initiative. For some families, the changes to the exemptions

will be financially devastating.

The policy appears to have some connection, in part, to Mr Rupert

Murdoch, whose family has strong relationships to GlaxoSmithKline

(GSK). At a dinner held by the free market Institute of Public Affairs

public perception of vaccines. Since 2009 he has been a non-executive

director at GlaxoSmithKline (GSK) sitting on the board of its ethics

committee. He was apparently head-hunted by the Chairman of

pharmaceutical giant GlaxoSmithKline (GSK), who held his record in

corporate responsibility in high regard. It is interesting to note

that within two weeks of James Murdoch’s appointment, and with the

assistance of News international journalist Brian Deer, there were at

Clearly the science is far from settled. There are so many unanswered

questions regarding vaccine safety and efficacy. There are also

policy and public opinion for their own interests while suppressing

raise the rates of vaccination for those who are already conscientious

objectors and those who are well informed and loving parents. However

it will financially cripple many already struggling low income earning

from those who really need it. Where there is a risk there must be a

WHAT: Day of action to oppose the governments “No Jab No Pay No Play” policy.

Invited speakers will be there from many modalities

WHERE: 2 Holt Street Surry Hills out the front of the News Limited office

Facebook “NO JAB NO PAY NO WAY – SYDNEY” Sydney Rally

One thought on “Informed choice means freedom of rights”