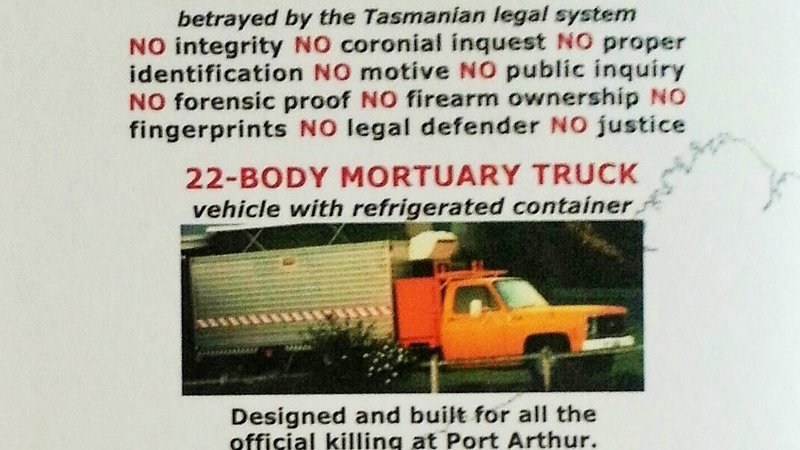 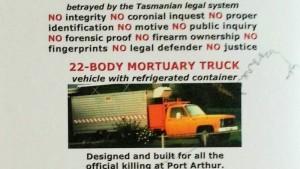 10 Nov 2015 — NO hard evidence proving guilt, NO motive, NO fingerprints, NO legal representation, NO truth, NO credible identification, NO public inquiry, NO legal integrity, NO proper firearm ownership, NO DNA evidence, NO coronial inquest, NO free admission of guilt, NO witness testified in court, NO forensic results, NO crime re-enactment, NO jury, NO complete list of evidence, NO JUSTICE!

Hello all Australians and people who were involved or knew of this tragic time in Australian history at Port Arthur. I lived in Tasmania and contributed my help toward victims, which barely scratches the surface to help that dreadful day in our History……My petition is to free the innocent Martin Bryant! and allow his rights to be heard once and for all…

It’s been a festering boil in my mind and many others I’m sure that poor innocent Martin Bryant is the victim of an atrocity designed to amend gun laws in this country. There is much proof of this happening, but wont go into this for now.. Martin was hand picked by ASIO to be handled by a Psy-op group in South Australia to become the patsy/fall guy for this murderous cover-up in 1996 Port Arthur Tasmania.  Martin had the IQ of 66 and mind ability of an 11 year old. The handling of Martin started a decade or more prior to the mass murder by Psy-op ( mind control).  When the time came for that horrid day they simply had all the Government’s on queue to murder escape, step down and tell the public, media lie after more lies, hiding, destroying all evidence from the public as this tragedy opened up, victims families included, and more so to Carlene and Martin!  As it is in 2015 nothing has budged to give Martin his lawful inquest, but only a shabby stupid piece in the Mercury paper ( Sept ) by a Mr. Ramage (Moron)  destroying Martin even more, what a hero Mr. Ramage is. NOT!  Carlene Bryant Martins mother has been denied access to her beloved son rotting away in Risdon prison where he is constantly being tortured. Martin is innocent of this horrifying mass murder cover -up, the true story tells of a much deeper sinister murder plan that was plotted by Government’s well before that fateful day in Port Arthur. Martin deserves a Coronial Inquest by law!  BUT hasn’t got it yet! its strange to have court hearings for such small crimes YET Martin has been denied right from the start!  When 35 people were murdered and 22 wounded by gunmen, just a bit to STRANGE don’t you think!  This is not how a justice law system should work!  So far its corrupt!! if we are controlled in this manner already god help the next ASIO hand picked child for maybe another Mass Murder any where in the world. I pray for every Australian to get behind a Coronial Inquest and to beat the drums for Martins freedom of speech rights and for Martin to be heard once and for all..as Australians we have a duty of care to all under privileged kids as Martin was and still is to a degree, this hasn’t worked either! the law has been broken! as many have in this horrid genocide.  The other factor is Martin HOLDS the truth! simply because he is still alive, this alone is worth more then we all could imagine, our people in power must be shaking in their boots to say the least.  I think its high time to have this story straightened out!  and have our so called heads of power talking some truths and sorting out who’s who, BUT we cant do it without the public support! …Please raise your voice and sign the petition to have Martin’s Coronial Inquest  under way, other wise we all lose in the long run, up until now Martin’s life certainly has! this is NOT the Australian way or is it? your choice…     Thank you for your time 🙂