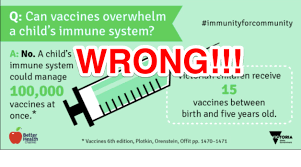 The Victorian government has taken down the infamous You can read the previous article on this matter here. 100.000 vaccines flyer from their website. 100.000 vaccines would be close to 50 litres of fluid. Yes, you read that right, FIFTY LITRES OF FLUID. There is zero evidence of this obviously and it’s irresponsible of anyone to claim such. Considering it is coming from the Better Health Initiative of the Victorian Government, this outrageous claim should have consequences.

I have asked the Victorian Health department, the health minister, Jill Hennessy and the Victorian Premier Daniel Andrews, to explain this ludicrous claim and also asked them if they would demonstrate it by taking the 100.000 vaccines challenge. (Follow it on Twitter and Facebook #100000VaccinesChallenge). As expected, no one responded. Rather than quietly removing this grossly incorrect flyer, the Victorian Government should have publicly denounced it and addressed the concerns about vaccines with integrity and compassion. This flyer highlights the disgusting lack of informed consent and the irresponsible tactics used to achieve and maintain it. The safety concerns parents have regarding vaccination are valid and the Victorian Government has failed families in this desperate attempt to silence them.

Health Minister Jill Hennessy has now demonstrated her lack of integrity over several vaccine-related campaigns. There simply is no room for blatantly false statements in the important role of Health Minister. How can Victorian families trust any of the information from the Government? It has shocked many families into questioning all vaccination information provided, including those who had not questioned before. Maybe this is why it was quietly removed.

The asterisk on the 100,000 vaccine flyer points to Paul Offit’s book, Vaccine 6th Edition. Paul Offit and his co-authors are the biggest pharmaceutical salesmen in the world. Offit is making millions off the vaccine schedule in the USA through his patents and as a result, he is not the person to quote on anything vaccine related. We wouldn’t, or at least shouldn’t, be listening to research on sugar intake, conducted by Coca-Cola for example. The Skeptics, however, will have it no other way.

A video of Paul Offit:

Minister Jill Hennessy along with The Skeptics and other members of the pro-vaccine community have consistently shown they don’t care about the side effects. They don’t care about the science behind the cases of vaccine injury. Why must they ignore those families? If vaccines are so safe and effective, why can’t they openly discuss risks in the way they do about other medical procedures? We are entitled to ask questions and being sceptical regarding the health of our families and they have verified our concerns.

Health Minister Jill Hennessy has made mistake after mistake. She has lied, worked with intrenet bullies and fabricated “tweets”. Now she is trying to cover up potentially dangerous information spread by her health department. When will people realise her position is no longer sustainable?

One thought on “Jill Hennessy’s 100.000 Vaccines Cover Up – The Science isn’t clear. The Silence is!”