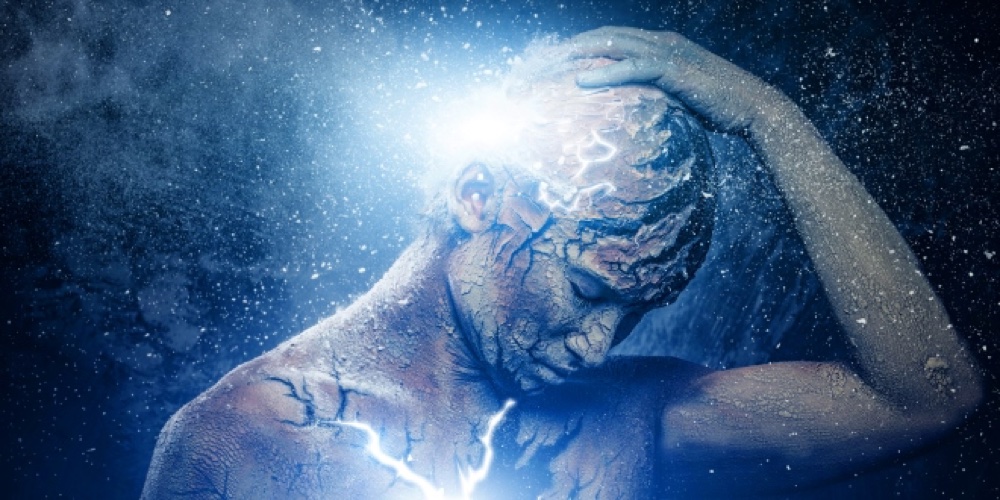 It also seems contradictive to many that pushing the envelope spiritually would produce physical ailments. It is only a contradiction if they are on the café-latte New Age route, with healthy living only, denying what they perceive as ‘bad’ feelings, such as anger and jealousy, basically perceived as feelings of the ego.

Genuine Spirituality is not for the privileged faint hearted who push the agenda of trigger happy spiritual insights of this and that on a cliché level.

People who insist on replacing worn out spiritual and mundane programming with their new found experienced spiritual insight, often find themselves in some sort of agony, because they will see that maybe the Guru was wrong, and the Mundane Control System / Spiritual Control System, is there to keep them at bay.
They are the ones often in emotional, intellectual and spiritual agony. And that stuff hurts.

Classically it is two different routes:

-Spiritual insight and fulfillment on the road of least resistance.

-Spiritual insight and fulfillment on the road where suffering is a component in the shift of the consciousness. The path of the true mystic, who knows that he or she will face many deaths in this lifetime: the death of the intellectual, emotional and spiritual insights.

That’s not easy, since we all probably thought at some point that we were founded and grounded in the status quo of things in our lives. Then we find that the status quo only is valid for some time and the eyes begin to stray, events kicks in and we have to change again. Every time we do that, it affects our inner life of thinking, feeling and most importantly attachments, either to people or to ideas of any kind on how this world is constructed, its emotional design and its spiritual markers.

Good, it’s called evolution and it’s agony time again in Nomad City. After the flush, out – a new found clarity sets in.
It’s going through a tunnel and crossing the bridge of sighs, to come out on the other side: Reborn again, a little less holy Baptist southern roller with an appetite for preaching and with a strengthened connection to what each of us perceives to be the celestial, holy, the Uni or whatever we call it.

We feel bliss, we feel safe, we thrive as well in churches and in a bar or at a mushroom retreat in Jamaica because we are even closer to the core of the sutra: I am in this world but not of it.
Which doesn’t mean we do not care about this world or the people walking this planet. We just get better at understanding it.
Often, and it goes as well for daily life, we have to distance ourselves from a situation to truly understand it, and the reason that really works well is that we are not entangled in the emotions of the same situation. If you want to evaluate your romantic relationship, its best done alone. We call that a sober look.

It’s the being in an argument-delayed response: I should have said… but we didn’t because the emotional content of the situation held us hostage.

When we walk the path of the mystic and account for and accept suffering as part of the spiritual buffet, it becomes much easier and that stuff simply stops happening to us because we get oddly detached in the moment and we often know what the situation is really about, usually power, and have no interest in that anymore.

This life, dear fellow traveler, is not about out powering our fellow beings. It’s about empowering them and between those poles, is the landscape in which the spiritual warrior fights his battles. The final sword is merely a shake of the head and a walk away and a non-religious version of: Forgive them Lord, they know not what they are doing.

Patanjali says in a Sutra: ‘Who are you? The Fly or the Bee?’
Sutras have layers and we have to peel them.
What Patanjali means is: What are you looking for in this life: The shit or the honey?
And the core of this sutra is: Both.

I wrote: Without the busy buzzing of flies, there would be no morning choir of birds.

Both are needed and this is where the path reveals itself to the Mystic.

At some point in my life I contemplated on the saints and eastern mystics, swami´s and such. They all were very fragile in the flesh. Francis of Assisi is perhaps the one most accounted for. He pushed it to become as close to his beloved Jesus as he could and it is my understanding that he achieved what he set out to: To merge with the consciousness of The Christ. He found a path, quite extreme through suffering and joy.

The Swamis and Gurus of India did and do similar things to transcend their being into the field of enlightenment.

We will be equally comfortable in the presence of both, but I don’t think that path is: The (only) Way.

But, the path we take as Nomad souls contains the joy and the suffering so it’s in the collective spiritual consciousness that the swing of the pendulum is embedded in our journey.

The question is: Why? The answer is: Light is the spirit – meek is the flesh.

Our spiritual body, our emotional body, and our intellectual body, move so fast and merge, and it’s the merging that is interesting.

As we travel our intellect gets more and more uninteresting, as goes for understanding spirituality. That is why I often say: I’m not interested in intellectual spirituality, I’m very interested in direct experienced spirituality, since it is that and that only, which makes us shift into a higher frequency of being. The mystical experiences we all have.

The merging of the intellectual body and the emotional, I refer to as the Alchemistic wedding.
That is where there are no contradictions between emotion and thought. They are One. When they are One, they give birth to Wisdom.

As a measurement, you can examine this for yourself. When you stop thinking about stuff and morph into a feel about stuff, these experiences will come as pearls on a string and you change.

It is not a One Moment illumination although it can be theoretically. It’s a reality-based illumination, and that really takes its toll on the flesh, since the vehicle that transports our emotional, intellectual, spiritual life, is our body. That causes friction and that friction can be very hurtful and can push the body to its limits due to its density. That often makes us ‘sick’, physically.

All of these bodies have to move at the same frequency, in order for us to be in perfect balance. It is in these periods between peak direct experienced spirituality, we suffer. It takes time, so give it time and do not think poorly of yourself when this is going on.

In such delicate moments of your life avoid the cliché factory of more or less drunken diagnoses such as:

“Cancer is growth at the wrong level”
Deepak says that we produce cancer every 15 minutes – but the immune system beats it.
“You need glasses – what is it that you won’t see” and such childishness.

You have to ignore that – telling yourself that you’re not spiritual enough and whatever boring stuff they come up with. They know not what they are talking about. You do! because it is experienced spiritual reality.

These alignments of our vehicles can take minutes, weeks, months, years. But the more we get them – the faster it goes.

Having to deal with this goes to show: You cannot ignore your own progress, victories and plugging out of the field of spirituality that you found for yourself –  there is no way back to who you thought you were once.

That train has long left the station.

6 thoughts on “LIGHT IS THE SPIRIT – MEEK IS THE FLESH”