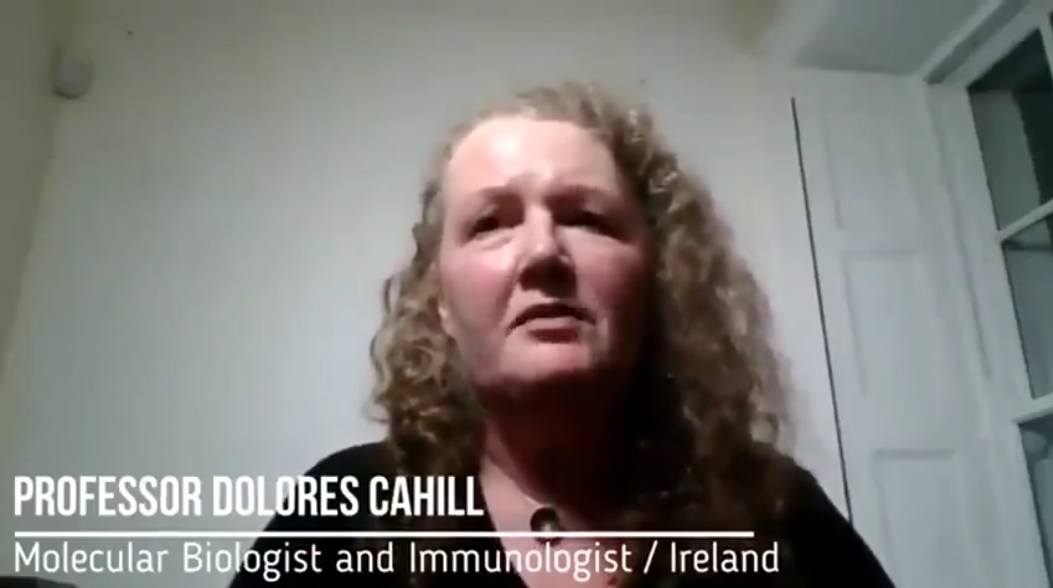 Dr. Dolores Cahill, PhD, is a Molecular Biologist/Immunologist and Professor at the University College of Dublin in Ireland.

She is an inventor, founder and shareholder of companies, and has been granted & licensed patents in Europe, the USA & worldwide with applications in improving the early accurate diagnosis of disease (autoimmune diseases & cancer).

Dr. Cahill recently did an interview explaining how previous peer-reviewed studies on SARS Coronavirus mRNA vaccines conducted on animals have had very negative results, which is why one has never been approved for humans.

One of the studies she discusses in this interview is a study published in 2012 titled: Immunization with SARS Coronavirus Vaccines Leads to Pulmonary Immunopathology on Challenge with the SARS Virus.

So the issue when you inject messenger RNA was that if it had a protein from the virus like the spike protein, this plus positive RNA can go into our cells.

The spike protein from the virus is expressed in our cells, and may be exposed to the immune system when those cells die, and the body starts mounting an immune response, including an antibody response.

So let’s say that happens in December, and people would start doing that straight-away, so within two or three weeks that process would start.

But if in February, March, April another coronavirus is circulating naturally in 2021, that will be like a challenge with the natural, you know the SARS is one of the natural coronaviruses, or it could even be the common cold, that what happened in this study is that the animal models after they had been challenged, got very sick, and that some of them died.

So then it says in the last line in the abstract, it said: “Caution in proceeding to application of a SARS-CoV vaccine in humans is indicated.” (Source.)

And so the name for this thing is “antibody dependent response,” or “cytokine storm,” or “immune priming” or “immune super priming.”

So this is why there has been no vaccine for decades licensed for coronavirus, because you get this issue that the messenger RNAs starts expressing the virus.

And then when it comes across the natural circulating coronavirus, it could be a month or a year, or 2 years down the road, that then the people get very, very ill very quickly with this cytokine storm.

And they also saw this in a respiratory vaccine, RSV. (See study.)

And the conclusion from this was that the disease was enhanced by the prior vaccination.

So what people need to know is that with these RNA vaccines, is that after you’re vaccinated, the rest of your life you will have much higher deaths in the children according to this study because you were vaccinated.

And when I came out with this in May 2020 (slide show presentation), is that the people may not make the connection, and what we do not want is that if there are significant deaths, say in February, March and April next year, that that is called Covid19 or Covid21.

We will have to monitor if the people who are dying, and there are predictions, that is why they are having the tender for large amounts of adverse events from the vaccine, is that if there is an increase in deaths, it is well-known, and we don’t want those deaths to be called Covid19 or Covid21.

They are, this issue with that vaccine, making people more sick than ever. There is a higher chance for death, not because of the circulated virus, but because of the vaccination, weeks or months ahead.

The cytokine storm is when you put RNA genes, mRNA vaccine injected into your body, you bypass all of the natural immune response, which would (normally) build an immune response to prevent the vaccine from actually entering your body.

So suddenly the mRNA gets into your body, and it’s used as the human machinery in the cells to express the human proteins.

So that suddenly the virus has been injected into your body, and then your immune system sees the virus in your body as something that should not be there, and it mounts an immune response.

But the shocking thing is, that normally you’re immune and you can get rid of the virus particles. It’s a slow thing.

But when you inject it, this mRNA, why it’s so deadly, is that it now goes into your genes, and starts expressing. And it starts stimulating the immune response from inside your body, and you can’t get rid it because of the source of the viral protein. You now have become like a genetically modified organism.

Listen to the entire interview, which is also on our Bitchute Channel.

If this sounds fantastic to you, please understand that Dr. Cahill is not the only one explaining how these mRNA vaccines work.

There have also been documentaries produced explaining how this “pandemic” is actually a “plandemic,” and that the U.S. Government has owned patents on coronaviruses since the late 1990s. See:

Also visit our Plandemic Page in our COVID Information Center.

This is a eugenics program in action before our very eyes, and if you have not yet listened to the interview with Catherine Austin Fitts that we published on 1/1/21, please watch it now so you can be informed as to what is coming later this year: