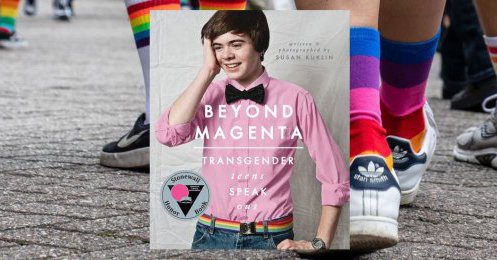 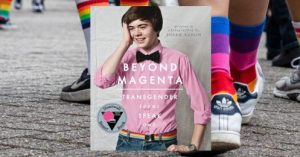 READ MORE AT RT
A “groundbreaking” book billed as an “honest look” at the life and struggles of transgender teens has sparked outrage online over a disturbing description of “sex” with a six-year-old child.

The book titled ‘Beyond Magenta’ has actually been on the shelves since 2014, but gained widespread attention after some disturbing passages were highlighted by the Binary Australia website, which describes itself as seeking to “challenge the aggressive agenda to de-gender” society.

ALSO ON RT.COMWait! US & UK doctors warn against hormones/surgery for trans-identified kidsOne young adult interviewed for the book describes performing and “loving” oral sex from the age of six. Alarmingly, there is no immediate clarification for young readers that this is illegal and damaging behavior.

From six up, I used to kiss other guys in my neighbourhood, make out with them, and perform oral sex on them. I liked it. I used to love oral. And I touched their you-know-whats. We were really young but that’s what we did.

A transgender book for teens which contains graphic descriptions of oral sex carried out by children as young as six is being promoted in the youth sections of local libraries, according to Kirrali…

The same person describes being “creeped” out by pedophiles who would “touch themselves” in front of him. Acts of aggression are also described in the book, including one incident of a teen pushing a pregnant teacher to the ground.

Describing past experiences and sexual abuse is one thing, but casually re-telling such stories in a manner that verges close to normalization is another thing entirely — a point which many on Twitter were quick to make.

Call your local library and/or public school and ask if they have the book “Beyond Magenta: Transgender Teens Speak Out.” Then respond accordingly.

It’s one thing to identify abuse as harmful. It’s another thing entirely to normalize it.https://www.binary.org.au/transgender_book_describes_oral_sex_by_a_6_year_old …

In the book it literally says “I enjoyed it.” Its not an account of sexual abuse. It’s the person literally saying they loved giving oral sex to people at age 6.

Some have even been tweeting and calling their public libraries to complain about the “sickening” book, with some even describing it as akin to “child pornography.”

My local library has a copy. @BMCLibrary I don’t know what they think. They didn’t respond when I tweeted about it the other day.

Disgusting. “The book contains explicit language, violent acts, and graphic descriptions of oral sex carried out by children as young as 6 years-old.”

The book is on offer in about 60 public libraries across Australia, but Twitter users pointed out that it is also available in UK libraries and has been included in online lists of the “best” books for transgender “kids” to be reading.

It’s in our libraries in London. It won’t be much longer when I pass on this info.

Yet, ‘Beyond Magenta’ has also found itself on another kind of list. It was number four on the ‘Top Ten Most Challenged Books of 2015’, according to the American Library Association’s ‘State of America’s Libraries’ report. Despite the uproar — or maybe because of it — the book sits at number 22 in Amazon’s ‘Teen & Young Adult Sexuality and Pregnancy’ section.

Kirralie Smith, the directory of Binary Australia told the Daily Caller that “such material has no place in tax-payer funded libraries and should certainly never be promoted to children.”

Some aren’t worried by the book’s content, however. In its review, Publishers Weekly called it “a sorely needed resource”for teens.