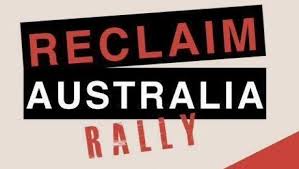 Saturday saw heated exchanges at protests around the country with the Reclaim Australia group facing off against supporters of multiculturalism.

The largest gathering was in Melbourne where protesters from both sides pressed against police officers charged with the responsibility of separating the two groups.

Mr Shorten told Channel Nine on Sunday that the Reclaim Australia group’s concerns about sharia law in Australia were unfounded.

“This idea somehow that there’s a big conspiracy amongst the Muslim minority to bring in sharia law is just completely exaggerated. I think it is really wrong to tar everyone in a minority with the view,” Mr Shorten said.

He said free speech was no justification for the demonstrations turning ugly.

“There’s no place for violence in any protests or any expressions of freedom of speech,” he said.

Supporters of multiculturalism say the Reclaim Australia rallies would have caused distress among new migrants.

The group said its hundreds of supporters were rallying against Islamic extremism, and not Muslims in general, but Welcome to Australia’s pastor Brad Chilcott said many of the signs and comments at the rallies were hurtful.