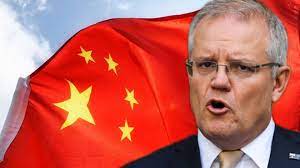 Letter to the Editor.

Here is the tracing of Just the aircraft from China to Sydney since 2pm Sunday 26 Sept 2021.

Click on this link and open, then copy and past an aircraft number listed above and see where they travel from and to – – https://globe.adsbexchange.com/?icao=789244

Did not count all the other planes to international airports in Australia today.

Found this on telegram:

New Bill To Allow Foreign Forces and Troops To Be Used on Australian Soil:

From a close contact My partner is employed by the Government and works with Rod Culleton.

She has just been informed that the dark side of the Aus gov are going through the very final steps to bring in the UN now that the below bill has been approved for the UN to assist in laying down the agenda.

Reading between the lines, my concern is that both our police and ADF will be stripped of their rank and returned to civilian status upon UN arrival, majority C.C.P troops.

The ADF of all ranks need to hear ALL the truth asap I feel!! ADF and Police are far more disposable than they know and may just find themselves without a salary very soon…please warn those friends of yours who wear a uniform

Writing my last will now.

UN Agenda 21/30’s vision is coming to fruition. Setting up nations in the UN to allow armies from other nations to be used on their soil against their own people with impunity.

Just when we thought the Omnibus Bill (which passed following some amendments) was an overreach of authoritarian power, the Defence Legislation Amendment (Enhancement of Defence Force Response to Emergencies) Bill 2020 has been put forward.

This law will allow foreign troops and foreign police forces to be used on Australian soil against the Australian people in times of a declared “emergency”. Most likely under the banner of NATO or the United Nations.

These foreign forces and/or police will be able to act with impunity, immune from all prosecution for any laws they break, damage to persons and private property caused whilst on Australian soil.

If passed the new law will allow foreign troops to be called upon in an emergency. But what constitutes an emergency? Industrial action? Anti-government protests? Civil unrest? Another fake Pandemic? The definition is so broad that it basically can mean anything that they want it to mean.

However that’s not even the point. Military. Especially foreign military should never ever be used against civilians. Make no mistake their primary role is to kill the enemy at the behest of government in order to protect Australia and her interests. It is not to police civilians at home.
Should this bill pass that means at any point in time if an emergency is declared foreign military or foreign police can legally be used to suppress the Australian people. Let that sink in. Also let it sink in that we are currently under a state of disaster in Victoria and a state of emergency across all of Australia.

One must ask the question, why? When this so-called “pandemic” is almost in the rear view mirror. Why go for this massive power grab now? And who’s behind this?

This new law is an absolute abomination and when you combine it with the recently passed COVID-19 Omnibus (Emergency Measures) and Other Acts Amendments Bill 2020 you really start to get a very clear picture of where Australia is heading politically. History is repeating and the masses are oblivious.

“Because of their large size and scope, omnibus bills limit opportunities for debate and scrutiny. Historically, omnibus bills have sometimes been used to pass controversial amendments. For this reason, some consider omnibus bills to be anti-democratic.” – Wikipedia

The Victorian government’s COVID-19 Omnibus Emergency Measures and Other Acts Amendment Bill 2020 was rushed through the state’s legislative assembly. The Bill was tabled by State Attorney General Jill Hennessy.

The Defence Legislation Amendment (Enhancement of Defence Force Response to Emergencies) Bill 2020 was tabled by none other than the Victorian Premier Daniel Andrews.

These two people represent a clear and present danger to the people of Victoria.

The #CoronaHoax has been exposed. No one is dying from a virus that has never been isolated. It’s not a threat to humanity let alone the people of Victoria. Look anywhere else in Australia… COVID-19 as a…thing, a way of life is pretty much gone. Only a few ridiculous measures are still in place and hopefully soon to be gone too. Yet Victoria is going ahead, guns blazing, and carrying on the COVID-19 narrative. Why?

Could it be that Melbourne, in fact, all of Victoria, is a part of the “Strong Cities Network”? A UN/Globalist Soros backed initiative. Also tie in that Victoria (the only state in all of Australia) is signed on to China’s Belt and Road Initiative and all of these draconian laws we mentioned earlier start to make sense.

It’s about setting up a hub within our national borders to kickstart the next step towards the overall goals of complete implementation of the UN Agenda 2030 doctrine.

We and many others have been discussing and writing about these plans for our future by the globalist cabal for years. We have mentioned the extension of vaccine related laws since the No Jab – No Play laws first came in. No jab – No Travel is one of those extensions. Even Bill Gates talks about making sure we have vaccine and immunity passports to travel. Well now Victoria has taken the lead on this directive too.