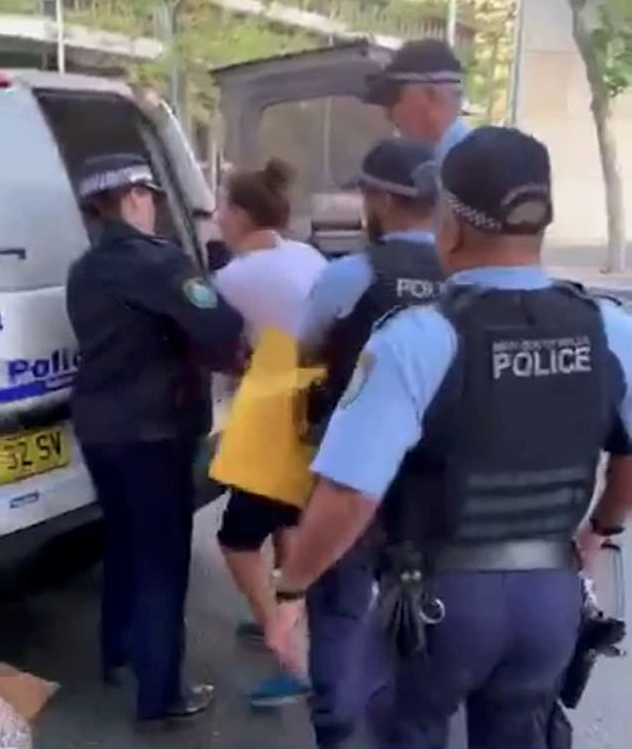 ‘Leave mummy alone’: Dramatic moment a mother protesting against COVID-19 lockdown is arrested in front of her screaming son before the distraught child is pulled off her

A mother has been pulled away from her screaming son as she was arrested for protesting ‘for her rights’ during the coronavirus pandemic.

Video footage shared to Facebook showed the woman speaking with police officers near Parliament of New South Wales in Sydney’s CBD about 3.50pm on Saturday.

The woman, who was with her son, wore a yellow sign that read: ‘If you don’t know your rights, you don’t have any. Magna Carta.’

The woman told police she was not doing anything wrong, despite the government’s social distancing regulations implemented during the health crisis.

Video footage shared to Facebook showed the woman speaking with police officers near Parliament of New South Wales in Sydney at about 3.50pm on Saturday

Australians are allowed to exercise outdoors but must keep a 1.5 distance from others.

‘I don’t know how you guys are going home in honour tonight and trying to infringe me with a notice which I don’t consent to because we’re doing nothing wrong,’ she told the group of officers.

‘You guys should be here holding the signs with us, defending us. I don’t consent to what you’re doing.’

The woman said she was not ‘acting in aggression’ and that she did not consent to sharing her name.

She asked if police she was ‘under arrest’ and female officer explained they were ‘asking for her name’ as they believed she was committing an offence.

The woman then appeared to walk on.

Additional video footage showed the altercation took a turn for the worst.

Police attempted to arrest the woman, while her son screamed and cried.

‘Mummy is not going,’ he said. ‘Leave mummy alone.’

Police attempted to arrest the woman, while her son screamed and cried. ‘Mummy is not going,’ he said

Pictured: A police officer holds on to the woman’s child as she is arrested

The protester appeared to fight off attempts to put her in the back of the paddy wagon and continued to claim she was not doing anything wrong.

The distressing footage concluded with police pulling the child away.

A police officer was seen holding on to the boy as he kicked and screamed for his mother. The woman was eventually put into the police van.

The alarming confrontation has left viewers divided, with one slamming the mother for bringing her child along with her.

‘Foolish, selfish attention seeking woman. A mother should protect their child far far away from aggravating situations like that during a global pandemic,’ one wrote.

‘She should not expose a vulnerable child to such unnecessary trauma. Her poor innocent boy,’ another wrote.

Other viewers criticised the police for arresting the woman by claiming she was simply exercising with a sign.

‘They were having a peaceful protest no one was getting hurt the female police officer got a bee in her bonnet and decided to step in and this is what happened,’ one wrote.

‘They were going for a walk to exercise while holding a political sign,’ another added.

A NSW Police spokesperson told Daily Mail Australia officers spoke to a group conducting an ‘unauthorised protest’ at about 3.50pm on Saturday.

‘Officers moved the group on after explaining they were not authorised to protest and were also not complying with social distancing regulations,’ the spokesperson said.

‘One woman refused to give officers her details and would not comply with their direction to move on.

‘She was placed under arrest; however, resisted and struggled with officers.

‘The woman was taken to Surry Hills Police Station.’

Protesters walked along Macquarie Street and past parliament between 2pm and 4pm on Saturday to ‘exercise’ their rights during the health crisis.

According to the ‘Exercising My Rights’ Facebook page and website, the protests are about the negative consequences of lockdown.

‘Do you think the lockdowns being implemented in our country are reasonable?’ the website reads.

‘These lockdowns have stripped us of our basic liberties in an unprecedented way.’

The distressing footage ends with police removing the child from his mother as she’s put in the car.

One thought on ““POLICE STATE: DRAMATIC MOMENT A MOTHER PROTESTING ‘FOR HER RIGHTS’ IS ARRESTED IN FRONT OF HER SON IN SYDNEY”