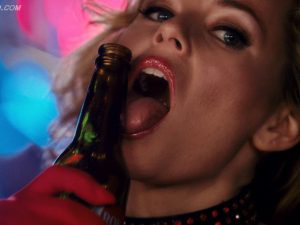 The offices of three local television and radio stations were occupied by soldiers on Friday morning, a few hours after tanks and hundreds of troops stormed the town in Israel’s biggest offensive against the Palestinian Authority and its leader Yasser Arafat.

“The pornographic movies started on Al-Watan television at around 03:30,” one 34-year-old Palestinian mother named Reema said.

“I have six children at home, they have nowhere to go with what is going on here and can’t even watch TV,” she said angrily.

“It’s not healthy really. I think the Israelis want to mess with our young men’s heads,” she said.

Anita, a 52-year-old mother of three children, complained about “the deliberate psychological damage caused by these broadcasts”.

“I am furious, these are the people who are shooting at us that also play this disgusting trick on us,” she said.

“We are desperate for news and constantly flipping channels and get these terrible pictures instead,” adding that videos of the intifada were also shown backwards with “ideal terrorism” written in red across the screen.

“Luckily, there is no electricity in half of Ramallah,” she said from her house in east Jerusalem where the channels are also available.

A fourth local station, whose premises were not seized by the army, ran a written message across its screen letting people know it was the Israelis who were behind the graphic scenes.

“Anything currently shown on Al-Watan and other local TV channels has nothing to do with Palestinian programmes but is being broadcast by the Israeli occupation forces, we urge parents to take precautions,” the message said.

The Israeli military denied that it had anything to do with the pornographic programming and instead blamed the Palestinian leaders.

“The Israeli security forces have no interest in putting pornographic and racist movies on Palestinian television,” an army spokesperson said.

“The only reason we are in these buildings and in this city is to fight against terrorists and their infrastructure after giving the Palestinians various chances to [do] it themselves,” he said.

Palestinian leader Yasser “Arafat is willing to go low in order to make himself look better in this uncomfortable situation”, he said.

Israeli foreign ministry spokesperson Emmanuel Nachshon said any such broadcasting was “shameful”, but said he was not aware of the Israeli army’s involvement.

“I cannot believe that Israeli soldiers would engage in such despicable behaviour,” he said. – Sapa-AFP

The Jews use of pornography against Palestinians!!

Pornography is one of the weapons which ‘Jews with an atavistic fear
of Christian authority’ have turned to to weaken the dominant culture
in a country and, thereby, assure that the Jews, always a minority, will
go unmolested by their ‘Christian’ neighbors.

The Israelis have recently shown themselves well-versed in what one
could call the military use of pornography. At 4:30 PM on March 30,
2002, Israeli military forces took over Palestinian TV stations when they
occupied Ramallah in the West Bank, immediately shutting them down.
What followed was a little more unusual. Shortly after occupying the
Al-Watan TV station, the Israeli forces began broadcasting pornography
over its transmitter. Eventually, according to a report from The Advertiser,
an Australian newspaper, the Israelis expanded their cultural offensive
against the Palestinian people by broadcasting pornography over two other
Palestinian stations, the Ammwaj and Al-Sharaq channels. One 52-year-old
Palestinian mother of three children, according to the report in the The
Advertiser, complained about ‘the deliberate psychological damage
caused by these broadcasts.’ The only Palestinian station not taken over by
the Israelis ran a written message at the bottom of its screen claiming that
‘Anything currently shown on Al-Watan and other local TV channels has
nothing to do with Palestinian programs but is being broadcast by the
Israeli occupation forces. We urge parents to take precautions.’

In addition to being outraged, the Palestinians were bewildered. ‘Why in the
world,’ one correspondent to Omanforum.com wondered, ‘should one do
such a thing?’ If we turn to the dominant culture for an answer, we can only
become more confused because according to dominant culture’s explanation,
pornography means freedom.

So making use of the hermeneutic provided by the dominant culture in films
like Boogie Nights and The People vs. Larry Flynt, Israeli troops began
broadcasting pornography over captured Palestinian TV stations because they
wanted to spread freedom among the Palestinian people.

Somehow that doesn’t sound right. The simple fact of the matter is that this
incident simply cannot be explained according to the principles available in
contemporary American culture.

In order to understand the disparity between the official explanation of
pornography and what might be termed its military use, we have to go back
to the ancients.

The story of Samson and Delilah might be a good place to start. Israel was
invincible militarily then too – at least that part hasn’t changed – so the
Philistines decided that they had to get at the Israelite leader by other
than military means.

Unable to defeat him in battle, they decided to seduce him sexually. Once
Samson succumbed to Delilah’s wiles, he lost his power, and Israel lost its
leader. They could find him then not on the field of battle, but rather to
use Milton’s phrase ‘eyeless in Gaza, grinding at the mill with slaves.’

The story of the Palestinian TV stations broadcasting pornography has a
curiously Biblical ring to it.