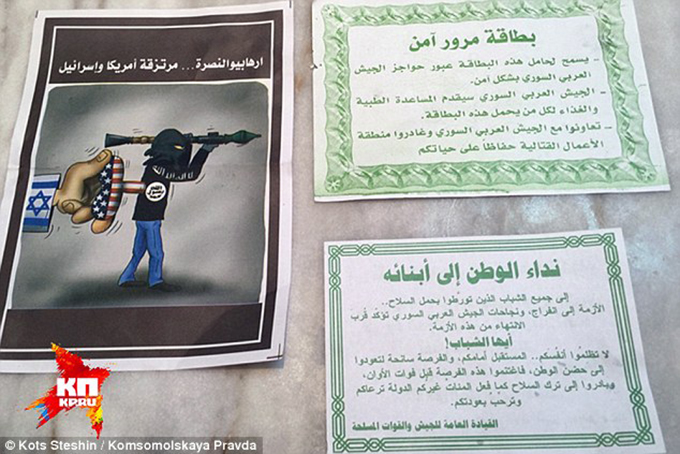 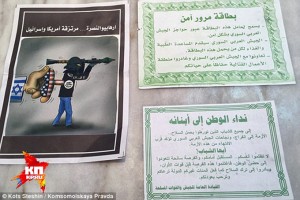 Dire warning: The leaflets (pictured) being dropped by Russian jets warn people to get out of the zone of ‘special operations’ – and one implies that terror group  al-Nusra  Front are backed by America and Israel

Syrian army helicopters have dropped tens of thousands of leaflets on ISIS and rebel fighters, warning them to get out now and ‘don’t make it even worse for yourselves’.

The flyers were let go over the embattled cities of Rastan and Talbiseh, which have been pounded by Moscow’s warplanes this week and where Russia claims 5,000 ISIS and al-Nusra Front terrorists are stationed.

It came as Russian media said there would soon be a large ground operation in the area driven by Syrian President Bashar al-Assad’s troops – with Russia’s military backing from the air and possibly on the ground, involving Spetsnatz special forces.

Iranian troops are said to have crossed the border from Iraq last week to help prop up Assad’s ailing regime. 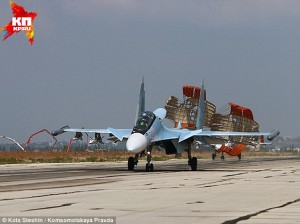 A pamphlet aimed at civilians, and designed to look like ‘religious literature’, read: ‘Co-operate with the army and leave the zone of the special operations for the sake of your own life.’

It said they can travel through Syrian checkpoints safely with the leaflet, and the government will give them ‘shelter, food and medical aid’.

Another one, meant for ISIS fighters, said: ‘Don’t make it even worse for yourselves.

‘The Motherland [presumably Syria] is ready to hug you back again. Give up your arms as hundreds of other young guys like you have done.’

One of the pamphlets, obtained by the Kremlin-friendly Russian Komsomolskaya Pravda website, featured a cartoon of an al-Nusra front figurine being wound up by Israel and the United States.

The message accompanying the propaganda cartoon – designed to sow divisions between the extremist factions – read: ‘Al-Nusra terrorists, they are American and Israeli rebels.’

The leaflets, were dropped out of ageing Russian-made Mi-8 helicopters guided by a ‘tablet with Google Maps’.

The newspaper’s reporter also said: ‘Very soon the attack of the Syrian army will start here’ – referring to Rastan and Talbiseh.

But just how much influence ISIS has on the region is open to dispute. Activists on the ground claim that Al-Nusra Front – a terror group linked to al Qaeda which split from ISIS – is dominant, as are other more moderate rebel factions fighting to bring down Assad.

Russia has been criticised over the last week for focusing its fire on moderate rebel positions – some of which have been given cash and training by the US – rather than ISIS, which are posing more of a threat on the borders of Assad’s power base after five years of civil war.

Hundreds’ of troops from Iran, the Lebanon-based Hezbollah Islamist group and rebels from Iraq have also converged on Syria over the last few weeks.