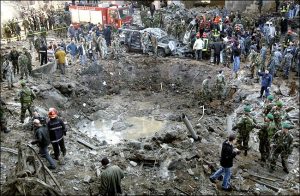 In a popular tourist district on the island of Bali, on 12th October 2002, a suicide bomber and a planted car bomb, killed 202 people, 89 of whom were Australian tourists.  Initial reports said that the bomb consisted of C4, a military-grade plastic explosive which is next to impossible to obtain – except for the military, but this story was soon changed and the bomb was then said to be of a more crude design.  The sheer devastation the bomb wrought on surrounding buildings in the area suggested that it was a very powerful explosive that was used.

The ringleader of the Bali bombers claimed that the attack was much larger than he had expected and that the only explanation for so much carnage was that the bombers were aided by the CIA, KGB or Mossad.  Imam Samudra, the alleged mastermind behind the attack, and who also chose the targets, told the Times of London, in an interview, that the second explosion was bigger than the bombers had expected and the attack killed far more people than originally intended.  What happened at Paddy’s Bar and the Sari Club was unacceptable, he said.

He totally denied making the bomb and any knowledge of who made the bomb and when.  The only explanation, he suggested, was that the CIA or KGB or Mossad had somehow tampered with the bomb.  This was very possible, he claimed.

The second bomb, inside a Mitsubishi L300 van, was detonated as people fled into the streets as a result of the panic generated by the smaller, first bomb which was detonated inside the nightclub. Allegations of U.S. and British government prior knowledge and even involvement in the Bali bombing have repeatedly surfaced.  And during an interview for an Australian documentary, former Indonesian President, Abdurrahman Wahid unequivocally fingered the Indonesian authorities as the true culprits behind the October 2002 bombing.  Wahid said the authorities were acting at the behest of Western intelligence agencies.

Probably significantly, hours before the bombing took place, the US withdrew all its administrative staff and diplomats from Indonesia, citing an unspecific ‘security threat.’  The British government also received the same warning but this was not passed-on to any relevant authority or the hundreds of victims happily making their way to a beach party.  Then immediately after the bombing, the FBI, the Australian Secret Service and British secret police ruthlessly took charge of the investigation, much to the chagrin of the Indonesian authorities and the Balinese police.

Widely believed to be yet another false-flag staged event, the researcher Wayne Madsen obtained an exclusive photograph of a suspected Israeli intelligence operative laughing ostentatiously with an Indonesian police officer, at the scene of the carnage, the morning after the deadly bombings.  The attack was in fact the catalyst for the Australian Prime Minister John Howard to join the US-British war in Afghanistan and, later, in Iraq, which tells us all we need to know about its perpetrators.

The reaction of the celebrator of the Bali bombing was similar to the celebrations of the five ‘dancing Israeli,’ Mossad agents who were witnessed celebrating the ‘first impact of an aircraft’ into the World Trade Center on 9/11, from a location at Liberty State Park in Jersey City, immediately across the Hudson River from lower Manhattan.

“Our Indonesian and American sources report that there was a significant US and Israeli military-intelligence connection to the October 12, 2002 bombings of the Sari Club in Bali, Indonesia.  A De Havilland Dash-7 aircraft registered in Queensland, Australia, landed at Denpasar Airport in Bali only hours before a massive explosion ripped through the Sari Club, killing over 200 people, many of them vaporized.

Our sources claim that an Israeli military team arrived at Denpasar Hospital after the explosion and claimed four bodies of white men in uniform and flew them out of Bali on the Dash 7.  The plane took off an hour after the explosion.  Our sources have revealed the plane was permitted to pass through Singapore for an unknown destination.  After the bombing and the plane’s departure, the tower logs were altered at Denpasar Airport to indicate the Dash 7 had not landed there.  However, in a major oversight, the apron logs were not tampered with.  Our sources have revealed the Dash 7 was Israeli-owned.

Several victims of the Sari Club bombing at Kuta Beach had flash burns on their bodies, something common with people exposed to a nuclear blast.  Our sources also have revealed that a CIA contract agent, an Indonesian national, was at Kuta Beach the day before the terrorist bombing.  He is also known to have been involved in other terrorist attacks on behalf of the CIA since 1998.

Our sources also indicate that the then-US ambassador to Indonesia, Ralph Boyce, who is now posted as ambassador to Thailand, was fully aware of US intelligence pre-knowledge of the terrorist bombing in Bali.  Boyce told the American managing editor of the Jakarta Post that it would be ‘unhelpful’ if the paper pursued the US angle in the Bali bombing.

WMR has also learned that the Australian government placed pressure on the Indonesian government to quickly remove the debris from the Bali bombing to barges brought in by Australia to Kuta port.  The debris was then dumped in the ocean.  Similarly, debris from the World Trade Center in New York was quickly transferred to Staten Island and eventually to India and China for smelting. In both the New York and Bali incidents, important forensics sites were compromised before a full investigation could be carried out. The decision to remove crime scene evidence came on orders from above.”  Wayne Madsen Reports, 27th March 2007