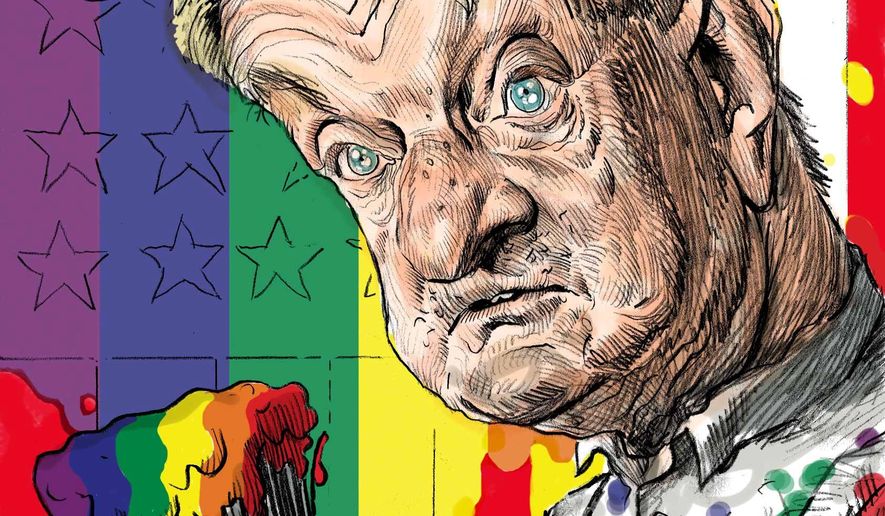 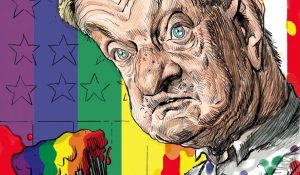 Three years ago, a Supreme Court ruling paved the way for gay marriage.

After it, the mainstream media had one question: What was next for the lesbian, gay, bisexual and transgender movement? They had, after all, won the big fight. In addition, many corporations had adopted policies barring discrimination based on sexual orientation, and two of America’s most watched shows at the time “Modern Family” and “Glee” featured openly gay characters.

“I really do believe [the Supreme Court ruling] is the domino that is going to tip over the rest of the dominoes,” Wilson Cruz, an LGBT activist, told CNN at the time. “Do not get in the way of this train, because it will run you over.”

To ensure things ran full-steam ahead, billionaire George Soros, through his Foundation to Promote Open Society, dedicated at least $2.7 million to the cause that year, according to his tax returns.

Some Republicans at the time mistakenly thought the LGBT movement had reached its pinnacle, that the culture wars had ended. They thought the party could now focus on fiscal concerns, which weren’t nearly as divisive.

But that was foolish — the LGBT movement was just getting fired up, and Soros-affiliated groups were already plotting their next prize.

It took two-plus years, but seemingly out of nowhere to many conservatives, the transgender bathroom debate exploded this summer after North Carolina legislators passed a bill that required people to use bathrooms matching their sex assigned at birth. The Justice Department intervened, calling such a law a violation of the Civil Rights Act, and the media went wild — it was their new civil rights movement.

It was a debate that had been percolating at the state level for years.

So what made North Carolina the tipping point? Well-funded LGBT organizers had success in California, giving them a blueprint to work in other states, and it’s an election year. North Carolina is a battleground state with presidential implications, and liberals love fighting the cultural wars. It was President Obama who lit the match, after all.

The bathroom debate started in California, where the Gay Straight Alliance Network, an organization based in Oakland, has been lobbying hard for transgender rights. The group is a “next-generation LGBTQ racial and gender justice organization that empowers … allied youth leaders to advocate, organize, and mobilize an intersectional movement,” according to its website.

They’ve created Gay Straight Alliance (GSA) clubs in more than 61 percent of California school’s and have advocated for and achieved 11 pro-LGBT laws in the state, including a 2013 bill that allowed students to join sports teams and use the bathroom of their gender preference.

They helped craft LGBT curriculum in accordance with the University of North Carolina’s LEARN NC program to teach and talk about the issue. They helped create an action guide that gave LGBT activists a blueprint for lobbying, including what hashtags to use on social media, and how to file complaints with the U.S. Office for Civil Rights.

The Los Angeles Gay and Lesbian Community Center also received $130,000 from Mr. Soros that year. Their Leadership Lab was published in the journal Science this spring, that evaluated the impact that door-to-door canvassing can have on reducing transphobia. It’s being used as national model.

The Leadership Lab writes the study has “been able to independently quantify the impact we’re making on voters: The same decrease in homophobia that took fourteen years of incremental change to occur in the past is occurring here, in terms of voters’ transphobia, over the course of a single short conversation with a Lab canvasser. What’s more, their study shows that this approach is beginning to counter the heinous ‘bathroom myth’ that our opposition has spread to scare voters into voting against the trans community in election after election.”

The Global Action for Trans Equality (GATE), headquartered in New York, received $244,000 from Mr. Soros. It’s main purpose is to pull all the LGBT organizations together in order to create a louder megaphone, laying out best practices and fundraising advice.

So what’s next for the movement?

He’s funded a Streetwise and Safe organization in New York, with the purpose of supporting a “national project focused on increasing safety for LGBTQ youth during interactions with law enforcement and developing advocacy skills to engage debates around discriminatory policing practices,” according to his 2014 tax return.

Mr. Soros also gave $525,000 to Justice at Stake, a group that’s looking to promote diversity in the courts for people within the LGBT community.

“This lack of diversity on the bench can lead to the appearance of bias, and even actual bias,” the group’s website warns. “A more diverse bench improves the quality of justice for all citizens.”

You see, winning court rulings is not enough, you need to control the courts in order for them to be fair.

Once that’s achieved? I’m sure there will be more demands.

• Kelly Riddell is a columnist for The Washington Times.