What you may not yet know is that the game was actually developed by a CIA-funded software front group for the purpose of using all the mobile device cameras of the brain dead public to conduct what I call “mass redundant surveillance” of any area requiring immediate video documentation by the CIA or NSA. It’s essentially a CIA spying machine pretending to be a game.

To accomplish citizen-assisted spying, the game’s puppet masters simply plop a virtual monster into any desired surveillance location, and hoards of totally brain dead apocalyptic zombie humans instantly converge on the scene, all pointing their mobile cameras at the virtual “monsters” so they can earn their virtual “points.” (See bizarre photos and video below…)

As this is happening, the video from selected players’ cameras is being streamed to the CIA in real time, along with precise GPS coordinates of the players’ locations. The more people the CIA wants to converge onto an area of interest, the higher the monster value they place at that location. As these photos show, when high-value monsters appear in such locations, hoards of Pokemon players rush to the scene via bicycles, taxis, automobiles and even on foot… all pointing their cameras at the high-value target and upstreaming real-time video to the CIA.

In effect, Pokemon Go is the CIA’s way of turning an obedient population of obedient zombie humans into inadvertent collectors of actionable on-the-ground intelligence. Pokemon is the game that turns obedient, bored citizens into highly effective domestic spies who are unwittingly working for the police state. Witness these scenes from actual Pokemon Go “monster” locations where high-value monsters suddenly appeared and hoards of mindless humans instantly converged: 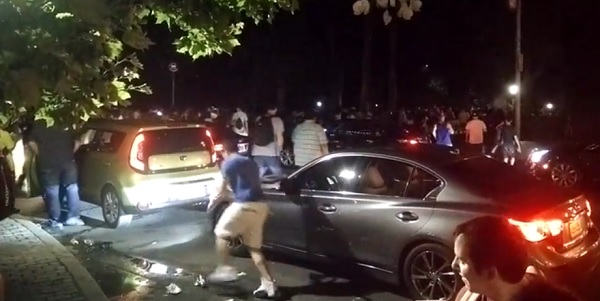 If any of this looks familiar, it’s because the scene looks ripped right out of AMC’s The Walking Dead zombie apocalypse TV hit series:

Right now, the Pokemon Go zombies have to view the virtual overlay of the game through their mobile devices. This is why they keep walking off cliffs, strolling into traffic andliterally killing themselves as they stare mindlessly at their Pokemon screens in the hopes of catching some make believe monster. In Encinitas, California, two men walked right off a cliff while playing the game, plunging 80 feet in the real world where there are no points awarded for being incredibly stupid. (Unless you work for the federal government, in which case maximum stupidity and incompetence earns you raises, bonuses and increased vacation days.)

The next step of the game, however, will transition the augmented reality to Google Glass-like eye pieces that are worn over the eyes. These transparent visors will overlay monsters onto the apparent image of the real world as seen by players, eliminating their need to stare at mobile devices. Instead, you’ll just see these people mindlessly running around like crazed crack heads, seemingly desperate to reach something that actually doesn’t exist.

And the final future step will be augmented reality contact lenses where full motion HD graphics are displayed on the inside of contact lenses to create the augmented reality illusion that Pokemon monsters really are walking around the real world. At this point, Pokemon players’ disconnect from reality will be complete, and they will exist at the whim of the game maters (i.e. Dungeon Masters) who decide what images, people, vehicles and events to drop into the virtual worlds that these people see as the real world.

As you might have guessed, this is not just a massive spying machine, but a totalitarian mind control system that will eventually have the power to assert absolute control over everything a person sees, hears and experiences. Augmented display contact lenses, when combined with head-worn cameras and ear pieces, can actively censor “unapproved” images or text messages (i.e. anything the government doesn’t want you to know) by literally redacting text you’re not supposed to read, overlaying government-approved advertising and social control messages onto the walls of buildings, roads or even the sky in the real world, placing virtual floating “WANTED” messages over the heads of individuals identified by the government as being “dangerous,” and so on. The possibilities of absolute mind control are limitless.

If such technology comes into existence, it would spell the total doom of human liberty and the nearly unstoppable dominance of the technocratic elite.

One answer to all this is, of course, small-scale EMP weapons that fry all electronics in the local area, returning people to reality by destroying the circuits that maintain their virtual worlds (mental prisons) which are controlled by the dominant technotarians. This is why I have long understood that the fate of human freedom may one day depend on small bands of rebels carrying out activities that could include:

* Setting off small-scale, portable EMP weapons to disable technological control systems run by oppressive, dictatorial regimes all over the world. (North Korea, anyone?)

* Conducting armed raids on AI robots to destroy and disable them. (See my related article How to Kill a Google Robot.)

* Hacking into and taking over remote controlled vehicles or robots to commandeer them for the public good.

* Seizing control of augmented reality systems to overlay messages of truth that appear in the virtual worlds.

If things don’t change, the future of human beings may look eerily similar to these zombies: 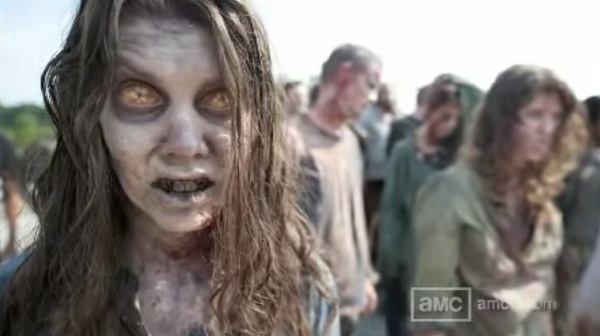