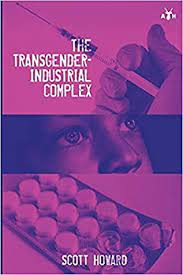 Howdy Members, I was just joined 02/07/22 by author – researcher Scott Howard to chat about his book, The Transgender-Industrial Complex and the agenda behind the mask.

We discussed the massively funded and organized Transgender agenda and the slow creep of their perverted attack against our children.

We quickly covered some of the critical bullet points of Scott’s book and why so many people are being tricked into supporting an extremely dark agenda that lurks behind the LGBTQ and Transgender machine.

In his debut book, Nebraskan author Scott Howard exposes the actors financing the institutionalization of transgenderism. Behind the medical research into gender transitioning of children, ubiquitous pride parades, and Drag Queen Story Hours is a lot of money. Sex education, the homosexual and feminist precursor projects, and the global propaganda are all pushed and paid for by very wealthy and well-connected people with motive and will. Howard demonstrates that the transgender phenomenon is far from the “grass-roots movement” some of its advocates would have the public believe.

Impeccably sourced and researched, The Transgender-Industrial Complex pulls the mask off the complex network of influential groups responsible for this inhuman project. Howard takes a deep dive into the murky depths of the Big Money behind Big Gay, exposing how the concept gained such recognition as well as the goals of the people behind it. At once wide-ranging and specific, advanced and accessible, The Transgender-Industrial Complex is essential reading for anyone who wants to understand why every institution with power, and a great many without, are uniform in their inversion of reality, their religion of lies, and their commitment to all that is ugly, broken, and foul.

https://crazzfiles.com/wp-content/uploads/2022/07/Transegender-Industrial-Complex-.mp3Podcast: Play in new window | DownloadSubscribe: Apple Podcasts | Email | RSS “PODCAST” Disconnecting From MSM Propaganda & The Big Virus Lie With Dawn Lester On tonight’s podcast show 25/01/23 i am joined by author and researcher Dawn Lester to chat about her incredible work and break down the entire COVID PSYOP.  Dawn Lester[…]