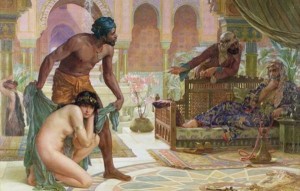 Much attention and condemnation has been directed towards the tragedy of the African slave trade, which took place between the 16th and the 19th centuries. However, another equally despicable trade in humans was taking place around the same time in the Mediterranean.  It is estimated that up to 1.25 million Europeans were enslaved by the so-called Barbary corsairs, and their lives were just as pitiful as their African counterparts. They have come to be known as the white slaves of Barbary.

Slavery is one of the oldest trades known to man. We can first find records of the slave trade dating back to The Code of Hammurabi in Babylon in the 18th century BCE. People from virtually every major culture, civilization, and religious background have made slaves of their own and enslaved other peoples. However, comparatively little attention has been given to the prolific slave trade that was carried out by pirates, or corsairs, along the Barbary coast (as it was called by Europeans at the time), in what is now Morocco, Algeria, Tunisia, and Libya, beginning around 1600 AD.

Anyone travelling in the Mediterranean at the time faced the real prospect of being captured by the Corsairs and taken to Barbary Coast cities and being sold as slaves.

However, not content with attacking ships and sailors, the corsairs also sometimes raided coastal settlements in Italy, France, Spain, Portugal, England, Ireland, and even as far away as the Netherlands and Iceland.  They landed on unguarded beaches, and crept up on villages in the dark to capture their victims.  Almost all the inhabitants of the village of Baltimore, in Ireland, were taken in this way in 1631.  As a result of this threat, numerous coastal towns in the Mediterranean were almost completely abandoned by their inhabitants until the 19th century.